since he last update of the smart home App (iOS version) the app does not work at all.

At the beginning it did crash every time during "connecting to server" - after Deinstallation and Installation it does not connect anymore to the smart home device (air condition in my case). He smart device itself is connected to Wifi and can be reached via PING....

Get the same message everyone is complaining about unable to connect to the server.

Is this being fixed? One of the main reasons I chose the Samsung was for this feature....

I have the same issue since I got the iPhone X, I did follow all updates and still cannot register/login to my smart hub refrigerator.

marvin49
Apprentice
In response to Elital

Would be nice if Samsung fixed the app

-- or at the "least" Samsung could even respond to posts / concerns on this forum.

I have made a couple of posts in Feb 2018 regarding the issue with the app stopping to work.  In my case it worked up to the point where I upgraded my iphone from 6 to an iphone 8

Curious if they even  read these posts.  No response from them at all. Disappointing as I really liked the feature for my new range 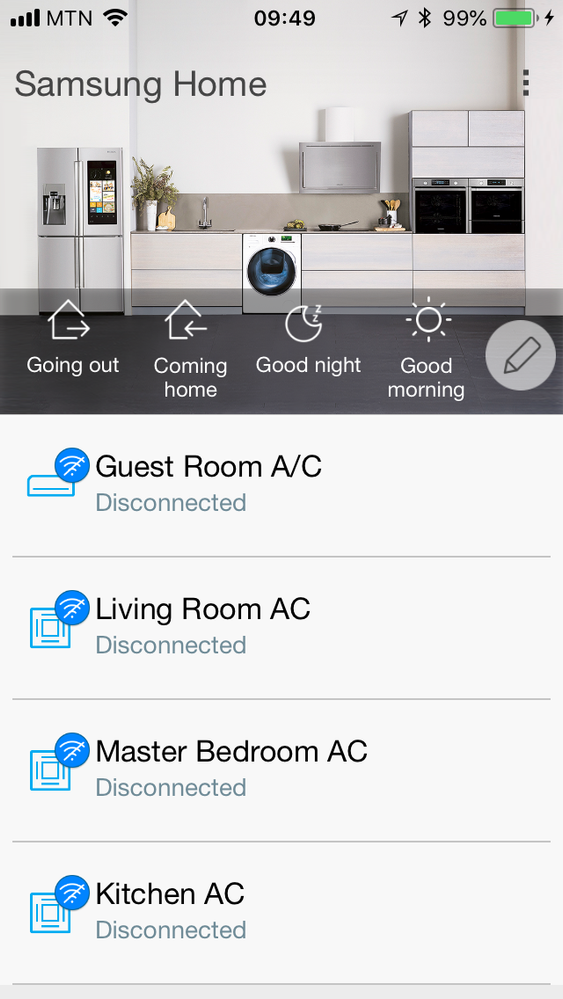 Every few days all the ACs are shown as disconnected and i have to do all the configuration for every AC on every iphone and ipad from the begining...

why is this happening?

Also why when i enter my account credentials on a new phone the AC devices i have previously registered in my account are not shown and i have to add them again ?

SKUS
Observer
In response to Mentores

Is there somebody from Samsung working on this issue ? I see only people complaining that it doesn't work.

Since 1/2 year Samsung AC is not connecting to IOS (at least for me) .

I bought 2 pcs taking into account that I can control them over WIFI .

Just to let you know, you lost one good customer .

marvin49
Apprentice
In response to SKUS

I have never heard back from Samsung on this issue either.  It has been months since I posted my issue. Very disappointing for me as well.  Also the app has never had any updates over the past several months (since I had the issue with my range).  So if the app was the issue they have not fixed it.  I don't think they every monitor the issues posted on this discussion site. What is the point of complaining???

I've been having issues with the smart Home app. It worked for a few weeks, then all my devices show as disconnected. I know they are on the wifi network and running as I can check on my router client list.

Is threre any other 3rd party software to control these A/C units?

So I am not going crazy... I have been trying to get the vacuum robot connected... and it goes get stuck on the ipad failing to register the robot.

iPad - can get all the way to the registering with the server and then it times out.  Reloaded the app, cleared the cache, name it and I have don't it...

Android - Can't get past the wifi selection.  Will not allow me to select an SSID.  Can type in the password, but that is about it.  Why you would not allow someone to type in the SSID (maybe it is hidden, but in my case it is not.) is freaking beyond it.  Also uninstalled and reinstalled.

drew69
Observer
In response to MechEng70

I am trying to use the Smart Home App with my Powerbot Turbo on my S8 and it does not work. It used to work on my old phone but since buying the Samsung S8 nothing is working. Smart home does not work, Smart Things does not work. They both show my vacuum but they both also report the vacuum as disconnected. However, I can start, stop and charge my Powerbot Turbo with my Amazon Echo (Alexa) so it seems that it is the Samsung Apps that don't work and if I had to guess, I'd say that it is a server problem at Samsung. They have had so friggin' many server problems in the past that it's almost a joke at this point as to if any of their smart devices will work. I have a Samsung TV, Samsung Refrigerator, a Samsung Phone and a Samsung Robot Vacuum... I just bought a new front load washer/dryer set, guess which ones? That's right, LG. Oh, and their smart devices app works. I love Samsung hardware but their software is so bad that I don't think I can buy anything else from them. Between the horrible customer service and the unusable Apps, what's the point? The biggest problem that I see with Samsung's customer service is that they know that there are problems but they don't want to admit anything so they refuse to respond while they work on the problems. Usually the problem gets fixed but you are kept completely in the dark. Then the next problem occurs, usually with the next update and once again, you are kept in the dark as their pride will not allow them to admit anything is wrong. It's a horrible way to do business and makes the customer feel like Samsung doesn't care. So, will this problem get fixed? Maybe? Or maybe they will just release a new App that they don't tell you about and you just come across it while spending countless hours trying to get your very expensive equipment to work.

marvin49
Apprentice
In response to drew69
drew69
You are right on the money. Samsung seems to be ignoring everyone on this issue. Hoping we will go away and like you we will
0 Likes
Reply