How to connect Q90R for Atmos?

Well I can't be sure but I suspect the TV can't play Atmos from the USB source. It maybe only works for the built in apps (eg Netflix) and from HDMI sources.

As for optical, this does not support Atmos.

what does this mean :

I have a Q70R and when I connect my Atmos supporting receiver (Denon AVR-X3500H) through HDMI_ARC, TV recognizes that it supports Atmos.

However, when I play an atmos encoded movie on USB, my receiver receives Dolby Digital surround signal, not Atmos.

If I play the same movie on my Shield TV , receiver receives Atmos signal.

So what is wrong ?

I also tested same with Optic cable and optic input on the receiver. But the result did not change. (No Atmos signal on receiver)

I have a shield connected to my Denon receiver and will play atmos films from USB. The shield will not play Netflix Atmos.  I had the q9fn and q900r would not send the atmos through, just dd+.

Best to ring Netflix support, who are very good and their number is in the app, and they will give you a straight answer unlike Samsung.

Remember though on the Samsung like any other TVin sound settings it needs to be bitstream out and hd audio out.

thanks for your answers.

so I understand that it is normal for optic to not pass Atmos (weird, but ok)

Then I will try to obtain a v2.1 cable and try with that.

interestingly, I have the same v2.0 cable between my Shield tv and Denon receiver, and in that scenario, Shield TV can send Atmos signal over HDMI

In the TV case, it is the ARC channel, so that may be different and may require v2.1

"Remember though on the Samsung like any other TVin sound settings it needs to be bitstream out and hd audio out. "

How do we set bitstream out/ hd audio out ?

Final Update on Problem of no HDMI connection to Soundbar

The TV would not recognise the Soundbar by HDMI connection unless the mains power to the living room was switched OFF and then switched back ON, then the HDMI connection was available in the settings menu.

John Lewis supplied a new Soundbar but the problem remained.

John Lewis chased Samsung who sent an engineer to the house. He replaced the main circuit board in the OneConnect box containing the HDMI ports but the problem remained.

The engineer returned a week later and replaced the main circuit board in the TV but again the problem remained.

The Samsung customer service washed their hands of the problem saying there was an environmental issue in the house causing the problem, which is a rubbish statement.

I requested a full refund and John Lewis refunded in full the cost of the TV.

I purchased a new Samsung Q90 TV from Curries (now £600 cheaper than I paid in July).

The problem is exactly the same.

The other two sockets I am using to control two standard lamps.

I have now found that if I power up my Humax FreeView box (connected to HDMI 1) it will switch on the TV and Soundbar connects via HDMI. However, there is such a bad lip-sync problem that I won’t be using this option.

This is a software problem that Samsung is refusing to acknowledge, but I am happy that I have a workaround and have saved £600 in the process.

this is very very concerning for me , I just bought the qe65q90r 3 days ago , I have all of the problems listed before , plus some , I use an xbox x as my main source for apps and blue ray and having known i would not get dolby vision i wasnt worried , however ive since discovered that in order to get true atmos i need to connect directly to my denon avr x6300h which has full 7.4.2 set up however having the avr connected through arc to the one connect box i have found that the tv randomly refuses to accept the pass through connection and tells me that there is no connection ? wtf , this is defintly an earc problem that samsung need to fix pronto via software upgrade they know its possible they have it on the 900r

im left with one work around luckily my x6300h has 3 video outs so im gonna try use the main out arc for tv viewing and use a second video feed to pass the xbox x feed to one of the 3 spare hdmi ports on the one connect and prey it works for if not the q90r will be returned to the dealer Ive invested very heavily in my atmos set up and had i previously known the q90r could not pass bitstream i would never have purchased it  what do you guys at samsung have to say about this earc problem ???

Good luck with getting a fix. I've been waiting almost 6 months and as yet Samsung haven't even recognised that there are issues.

thanks for your answers.

so I understand that it is normal for optic to not pass Atmos (weird, but ok)

Then I will try to obtain a v2.1 cable and try with that.

interestingly, I have the same v2.0 cable between my Shield tv and Denon receiver, and in that scenario, Shield TV can send Atmos signal over HDMI

In the TV case, it is the ARC channel, so that may be different and may require v2.1

"Remember though on the Samsung like any other TVin sound settings it needs to be bitstream out and hd audio out. "

How do we set bitstream out/ hd audio out ?

I have the exact same issue with the same TV but with a Yamaha RX-V685 Receiver which also supports eARC.

While in the Netflix app of the tv, I select in the OSD of the Samsung audio settings Dolby Digital+ and checked Dolby Atmos....During playing a Netflix movie with Dolby Atmos stream I check with the Yamaha musiccast app which stream actually is send. This shows a dolby digital+ but not Atmos stream.

I use a 2.0b HDMI Cable, which should support Dolby Atmos...

Similar issues here. I have the q90r 65 inch and the hk q70 soundbar. The internal Netflix app recognises the Dolby atmos capability of the soundbar. The atmos symbol can be seen next to the relevant films. Yet, when I watch said titles the TV plays them in Dolby digital mode rather than atmos. This occurs no matter how many times I switch to atmos in the settings. What's strange is that atmos was functioning perfectly up until today and then without warning all of these problems began. I literally watched klaus with atmos two nights ago and now it longer works and yet nothing has changed between time. What the hell is going on?

Just checked - it does support atmos  from usb. I've tried Dolby atmos demo files with eac3 audio. Plex app does it too by the way. 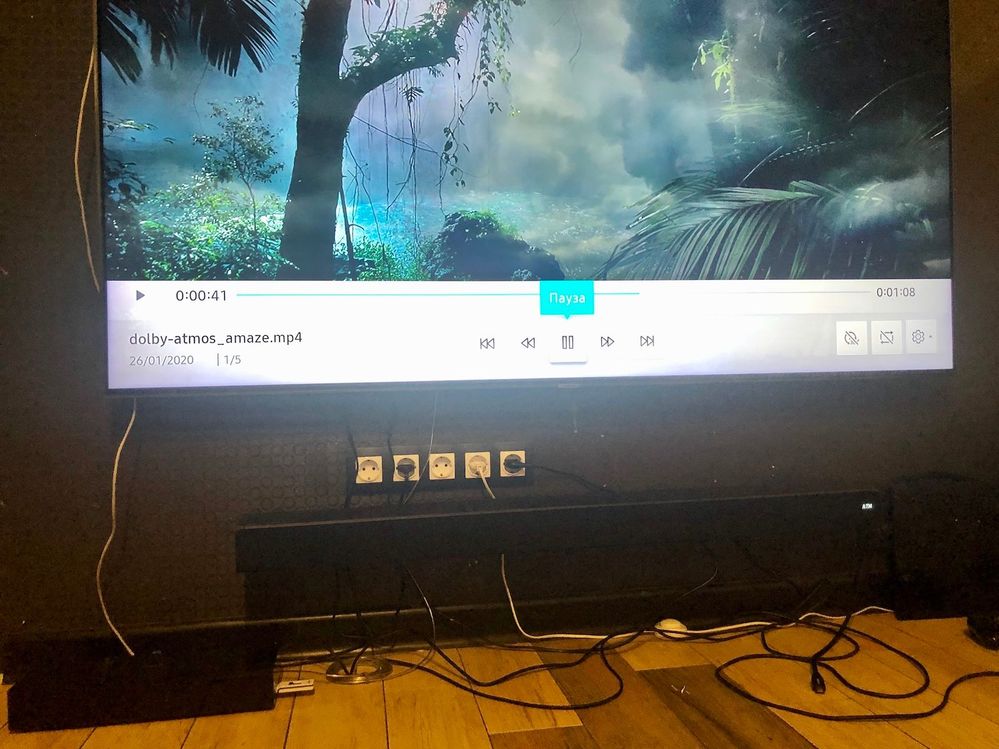