This morning I have two activities in a row (both are run outdoor) as picture. When i press "Tap to sync" in my watch, only the newest activity is synced to my account. The second activity is not synced. But I cannot find any "Tap to sync" to sync this record in my watch.

How can i solve this problem? Because I am in a race, so that this record is very important to me.

I will happily take a look into this with you. Can you confirm if the watch software and all the apps are up to date? Are you using this connected to a phone? If this is the case, which one?

I've had the same problem. Using a Samsung Galaxy Active with an S10.

Please help. I signed up for so many virtual running events. Need to submit my records via strava to claim rewards etc.

I`m replying to this tread as I have a similar issue.

Yesterday I had a bike ride using only my watch as tracker, and Strava as the app.

When I finished the ride, the app crashed but it came back asking me if I wanted to restore the crashed ride, which I confirmed. The ride is included in the overview in Strava (See attached picture), and it is also registrered in the Samsung Health app (Picture also attached) (This app seems to not include GPS-data).

I have tried resyncing, and it says that sync is complete.

All software/apps are up to date, and the watch is connected to Huawei P20 Pro. As mentioned, it was not connected during this ride.

I have had a hike later the same day and another ride today both of which have synced. 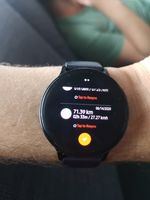 Can you please help me? I have a galaxy watch active 2. I use Samsung health and strava. I used to sync activities normally but today the strava app crashed after I finished my run. I have been trying to sync the run which shows in the strava app history. It says sync completed, but nothing shows in the phone app or the web.

My phone is a galaxy s10. All software is up to date.

How can I retrieve today run from the watch? The Samsung health has synched fine though.

I've got the same problem, app crashed during a hike, I can see the activity in the history, it says it's synched but it's not appearing on my Strava account.

ekaterina19
Apprentice
have you resolved this problem??
0 Likes
Reply
Highlighted

Hashkar
Apprentice
In response to ekaterina19

@ekaterina19 wrote:
have you resolved this problem??

Strava was updated a few days ago on the watch. I have not tried it since. But I am now syncing s health with strava automatically. So i do not need to run the strava app on the watch anymore.

ekaterina19
Apprentice
In response to Hashkar
yep, they released 1.5.0 update last week, but it continues to have problems((( yesterday i did 6 hours trekking and i cant sync this mobile. i really regret that i didn't buy garmin
0 Likes
Reply