What is the link to this on the av forums?

Do we think Samsung will sort this ? I have had my TV for just over a week from richer sounds but as I have not had any error messages yet about insufficient memory I guess I have no justification to take it back

I had this issue some months ago, I could update my apps by resetting the TV to factory defaults (and starting all the apps directly with the new versions I guess). From that moment I didn't see any issue.

OK I have checked mine and I also appear to suffer the same thing. I have 647 mb used and only 168mb free

But when checking the apps they are all really small.. Only 5mb large.. So what is taking up all this space ?

Some apps are larger, and also they are compressed before installation and can take up more space, especially if they need a cache. I think the OS reads the apps drive as 1GB including formatting, so you only have around 815MB of available space. As the built-in apps (undeletable) take up around 650MB and require 150MB to update, you can see the issue, especially if you installed any additional apps. 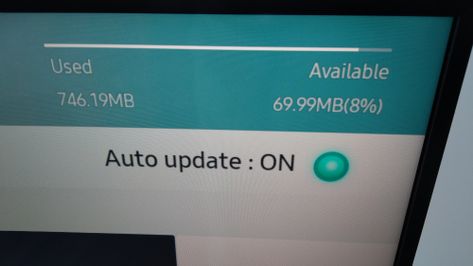 Please see my attached photos which show my storage issue and the resultant error message when the auto-update tries to activate.

The jury is out as to whether Samsung have actually only installed 1GB of apps storage or whether it's a reporting issue. The next range up, NU8000, has a more than adequate 3GB of storage space in total.

Do we think Samsung will sort this ? I have had my TV for just over a week from richer sounds but as I have not had any error messages yet about insufficient memory I guess I have no justification to take it back

The auto update happens on a monthly basis, so you will encounter the issue. I don't think Samsung will rectify it as they still won't admit there's an issue in the first place. I would recommend changing to another model. A poster on the AV Forum changed his NU7400 to an NU8000 without a quibble at Richer Sounds. As it's a known issue there, you should be fine if you take a photo of your storage, as I did in the previous post.

chrisnewton
Navigator
OK as I have 180mb free space I should be able to auto update.. Will it need 150mb every month? So for example in 2 months time it will have used 300mb? Or is it just 150mb every month..if you get what I mean?
0 Likes
Reply
Highlighted

@chrisnewton wrote:
OK as I have 180mb free space I should be able to auto update.. Will it need 150mb every month? So for example in 2 months time it will have used 300mb? Or is it just 150mb every month..if you get what I mean?

Good question. It seems to ask for around 150MB each month to update, but whether that over-writes the previous update cache or adds to it I don't know for sure, but I think it over-writes. However, 180MB is tight. You might be ok if you don't add any additional apps. Anything that involves AV streaming, such as Plex, will eat into that space. As your TV is newly-purchased I'd get an exchange to a model not in the NU7000 range, just for peace of mind.

chrisnewton
Navigator
I have just had a look and the 8 range is £200 more and I can't afford that. To be honest I don't want anymore apps. I will only use YouTube And the catch up apps.. So I'm thinking if it over writes I should be OK?

Also if I do need anymore apps am I right in thinking you can save to USB?
0 Likes
Reply
Highlighted

I maxxed out my internal apps memory as a technical exercise to see what would happen when I tried to download another app. The USB option is only available when the internal memory is full, and if it's full it won't allow the built-in apps to update because they require internal memory for this, presumably for the 150MB update cache mentioned earlier. So whoever designed the system need a kicking!

If you're happy with the apps you have and can keep around 180MB free for updates, then you should be fine.

chrisnewton
Navigator
Thanks.. I really hope they sort this though.. We should not be having this discussion with a new TV in 2019
0 Likes
Reply
Highlighted

Totally agree. I think it's pathetic of Samsung to have this issue and then make it worse by not admitting it and fobbing people off when they call support.