Samsung QN95A Neo QLED - is my one connect box having issues?

Got the new NeoQLED 3 weeks ago and have had some issues which make me think the One Connect may be faulty or having some issues.

1st issue was ethernet connection, kept popping up randomly on screen that cable disconnected and then reconnected. I got a new cat5 high speed cable and still the same, so unplug ethernet and setup wireless and all working ok now it seems.

2nd issue is to do with sound. I had the TV setup with the Samsung Harmon 950, with Sky Q and Xbox Series X.

When watching a movie on the Xbox, every so often the sound will just go for a second or two. Same happens sometimes with SkyQ as well. On the soundbar when it did this it kept popping up Dolby Atmos as switching on, so wasnt like a consistent signal was going to the soundbar (TV Settings were set to Auto for sound pass through on eARC and it happens with all options of sound in the tv menu).

I chatted to Samsung who said the soundbar may not be compatible with the TV (which to me came across as an excuse rather than it actually being incompatible).

So I purchased a new soundbar, a Sonos Arc, set it all up, new HDMI 2.1 cables for each device now as well (and swapping what is in which HDMI port on the OneConnect).

Same issue, sound will cut out every so often when watching a movie or SkyQ, which is a bit annoying, this is ONLY on externally connected devices, if i watcha  movie on Netflix/Prime/Disney+ or from my local NAS, it works fine.

I did the test as I also have troubles with hdmi, with my ps5 it starts switching on and off the image and says the cable is not working but it works and it worked on my q95t.

now the qn95a has this issue, plus sometimes it decides to switch the audio from the sound bar (Samsun g q70t sound bar) to the tv speakers by itself

I have the same issue with the network connection messages.

If you turn off eArc the sound drop outs stop too but it's not being used as intended then is it?  I wish |I could return it to be honest.  Love the picture but the rest of it (the massive OSD when you change volume) does my head in.  Sony next time for me.

All testing like HDMI has been done, it happens across any device connected to the OneConnect

Have had engineer out who replaced the OneConnect cable, but issue still occurs, the engineers even heard the issue when on-site but have heard nothing since I was asked to send them video with the audio issue happening

I still think it is the OneConnect box or the firmware, as I have tried with other devices now too and same issue

Also setup another tv with same devices and sounds work absolutely fine with the Sonos and Samsung sound bars, it’s something with the tv 😔

The network message goes if you use wireless, I prefer wired usually as less interference but am now using wireless for the tv 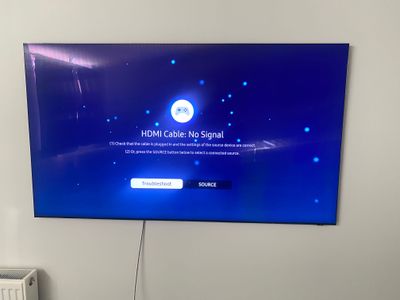 I rang technical and they said it was the sky box and I had to ring them which I did and there is nothing wrong with it. They could not explain why the ps5 did not work really,he tried to tell me that I had to ring Sony and get them to send the uhd signal so it would work but know this is a lie. Now waiting on management to ring me back. They also said there is nothing wrong with the one connect box and if they sent a engineer out I would get charged which I’m not happy about as it’s only just over a week old and it’s a £6000 tv shocking customer care. I think it’s very clear there is an issue with the one connect box  and they don’t know how to fix it otherwise they would not feel the need to lie to get me off the phone 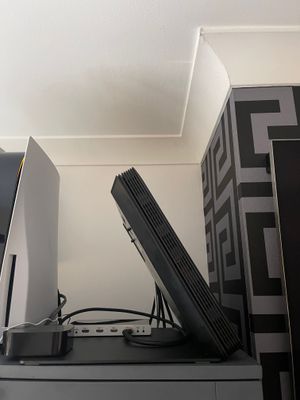 I have QN800A and Sky Q. I also have Q950A so good think they would pair nicely but they don’t. Earc is broken due to overheating and the TV not understanding how to process an input changing it’s sound format on the fly (which a console does if you go from menu to playing a blu ray).

I fixed sky Q by plugging it into my Soundbar directly - it just won’t work with the TV unless you change the sound output to Stereo.

I believe the network dropping is also related to overheating of the OCB. As this also improved when I took it out of cabinet.

I’ve resorted to using the TV stand to mount it as it seems to cool more efficiently like this rather than flat - and I assume Samsung tested it like this too. Doesn’t look that bad actually.

samsung are coming Monday to investigate but if you look at forums these problems have been happening for years. I’m going to push for a refund and get a Sony. Best of luck.

After a up hill battle we are getting ours picked up today to be replaced. Hopefully the new one works but if not I will be asking for a refund and probably going down the Sony route as well. Mine has been wall mounted we don’t have space to fit it on a stand. Not noticed overheating and the sky q worked as did everything else but only in hd. As soon as we tried uhd it would not notice the source. Very odd and clearly something wrong with the one connect box. Good luck

Hi, did you manage to resolve your Sky Q  issues with this TV ?
Also just got the QN800A neo qled 8k tv and constantly get a 'This screen does not support HDCP' error msg from the sky hdmi input.
Have tried all 4 ports on the one connect box, 3 types of new certified 8K UHD 2.1 hdmi cables & few hours with the online Samsung help resetting & rebooting my tv to get no where other than to finally be told this is a sky problem (...Q set top box however still works fine with my old Samsung tv ?).

Looking/hoping for a solution or looks like the tv will need to go back.
The one connect box also seems to be running pretty hot, so will try out your tip & mount it on the stand, thanks

I may just have same problems all over again when it arrives but I hope not. Sky does work aside from the stripes though. For HDCP error try a different HDMI cable and make sure input signal plus is on - I’m sure you’ve tried but just in case.