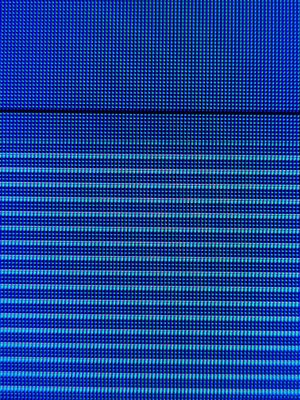 As shown in the attached photos, there is now a band of horizontal lines across the bottom of the screen, the lines are flickering / shimmering and they are transparent (I can still see the TV picture through them) they also produce a slight reflection of part of the image from higher up on the screen - (see photo).

The TV has not been moved or dropped or knocked at all. One minute it was perfect, then this band of lines appeared. The band is about 10 - 15cm high and is VERY noticeable. I have already tried disconnecting all cables and ive done a full reset etc and nothing improved.

I can't take the TV to get inspected anywhere due to shop closures during Covid19 lockdown etc and it's too large to fit in my car.

What can I do ? Can the band of lines be fixed? Is it worth paying to get it repaired on a 2016 TV ? Any advice or suggestions?

*under very close inspection (see the blue photo) there appears to be an entire line of broken / missing pixels running from one side of the screen to the other. It's below this 'black' line that the 15cm band of flickering pixels appears.

Thank you for your suggestion, I have already contacted Samsung Support via the same link you sent me, but they seemed rather unhelpful.

I have now been quoted £1,000 parts plus £100 call-out fee, to repair it, by an authorised Samsung service agent, based on the same photos posted on here their engineer said it would need a full screen replacement.

However, they then advised me that for my model of TV the parts are not even available - they can't order them (maybe due to it being made in 2016).

Does anyone out there have any experience of this or suggestion of what should be done? Is it worth repairing a 2016 TV for over £1,100 repair costs?