We purchased a Samsung tv from Best Buy at the end of 2015. It has had off and on smells the entire life of it. The past month, it has given off a very strong smell of burnt plastic and it almost smells like chlorine from a pool at times. Has anyone else experienced this and if so, how can I fix this?  It’s a 40 inch, details in photo below.  Thank you! 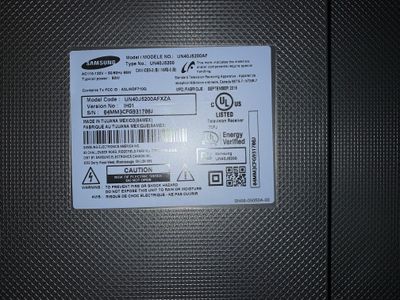 TV
It's impossible do diagnose over a forum. For your own safety, get a professional to look at it.
0 Likes
Share
Reply

Samsung takes these matters very seriously and will do the best we can to assist you in this situation. I can see that your TV model is from outside the UK/EU (where we are based), however, we can pass your details to our team in your region internally. Can you please send us a message from here: https://eu.community.samsung.com/t5/user/viewprofilepage/user-id/1716597 with your details?

Yes.  I've had the problem on Samsung and other TV's.  The smell tends to build up in the house over a a few days until it begins to  irritate my eyes and give me a head ache.  If I turn off the TV (I mean pull the pluge) the odor will slowly disappear over a few days.

I searched for the source of the smell for like several years, blaming the HVAC system, looking for mold, the dish washer, every possible source.  I am 100 percent positive it is the TV’s.  Several years ago I tried getting the issue resolved with Samsung.  It was a waste of time.  They might send someone out to look at it, but they find nothing wrong with it.  I believe the manufacturers know what causes the problem but since it affects only a small percent of the people, they do nothing about it.  It is probably one of the plastics used in the TV off-gassing.  If the company is reading this:  I would be willing to pay extra for a TV that does not give of the fumes.

Hi @rabbitdog, we do take these cases very seriously. Has an engineer already come out and inspected the TV?

They sent someone out.  He took the TV apart and looked at the inside.  Put it back together.  Said there was nothing wrong.  I have since given the TV.