Device being locked in 24 hours due to trade in not complete, 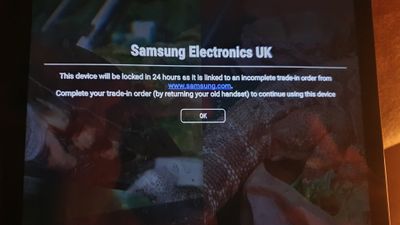 Just in case anyone still has issues, trading standards have been made aware

Finally giving up (tablet, no trade-in, third party seller). Returning for a refund as Samsung don't seem able to unlock it. Tunch of bossers.

I fall into the latter category:  I bought my device on Amazon, paying in full (as one does on Amazon) for what I thought was a new, legitimate Samsung Tab S7FE.  My device worked for about a week, then, whilst I was away on holiday I got a message saying "This device has been remotely locked as the original purchaser failed to complete payment of their order"; no advance warning that I had 24 hours to sort it out or anything.  I tried contacting the email on the screen (help@tradeinresponse.co.uk) but got no response, then tried the Samsung live chat which basically said I had to contact the retailer, which I did.  I also tried emailing help@tradeinresponse.co.uk a second time.

Anyway, long story short, my device did, briefly, get unlocked though I had no communication about it and so don't know which of my actions produced that result.  Just as I thought everything was sorted, it has since been locked again and has remained so for over a week now.  After contacting both Amazon and the marketplace retailer (I hadn't realised at the time, but it turns out I hadn't bought from Amazon directly), I have now been offered a refund.  The problem is that refund only covers the original price I paid (of course) which means I will have to cough up another £60 to get the same spec device from somewhere else.  I have also lost money on the screen cover I bought which is fixed the locked device I've had refunded.  Moreover, I am having to return my device connected to all my accounts as I cannot log into it to delete them, which I feel is a major security risk, responsibility for which lies squarely with Samsung.  I have pleaded with them to unlock my device again just so I can unlink all my accounts but they maintain there is no way that can be done, which I simply don't believe.

All in all a complete shambles, with Samsung blaming the retailer and the retailer blaming Samsung.  I am also minded to report this to the UK trading standards authority and online fraud people.

Tablets
I am having this issue now as my son sent his old phone to the returns dept. Rather than the tradein centre because he misunderstood the instructions. He struggles with stuff like this and is away at Uni.. please can I ask.. has this been resolved?
0 Likes
Share
Reply

Tablets
Can I ask...Did they resolve this? My son has the same problem
0 Likes
Share
Reply

Tablets
Can I ask.. did they unlock the phone?
0 Likes
Share
Reply

Has anyone had this resolved? I have the same issue - bought a phone from Samsung, sent my phone as a trade in that had a confirmation email of it being accepted and the order closed, but my phone actually locked and cannot be used. Has been 48 hours without a phone now and emails and phone calls all are not responded to. Have sent many emails and no one can help and had exactly the same problem of being fobbed off. I have no idea what to do and this is very stressful as need my phone to contact elderly relatives, COVID pass, banking as well as work. I don't have another phone to use either.

Yes mine was unlocked randomly with no warning from Samsung. It took about 6 days all in all.

Thanks. I am on day 5. Did you raise a complaint? Mine is 100% Samsung's fault so will be complaining as still not resolved.