Mobile Apps & Services
As you can see in the below screenshot, I have data that was synced with apps that are now discontinued. I am unaware of what that data may be so I wish to download the data to view it and check whether it should be deleted. Samsung seems to provide a convenient delete button but it doesn't provide a way to download it as far as I can tell. Can anyone suggest an alternative way to get this data? 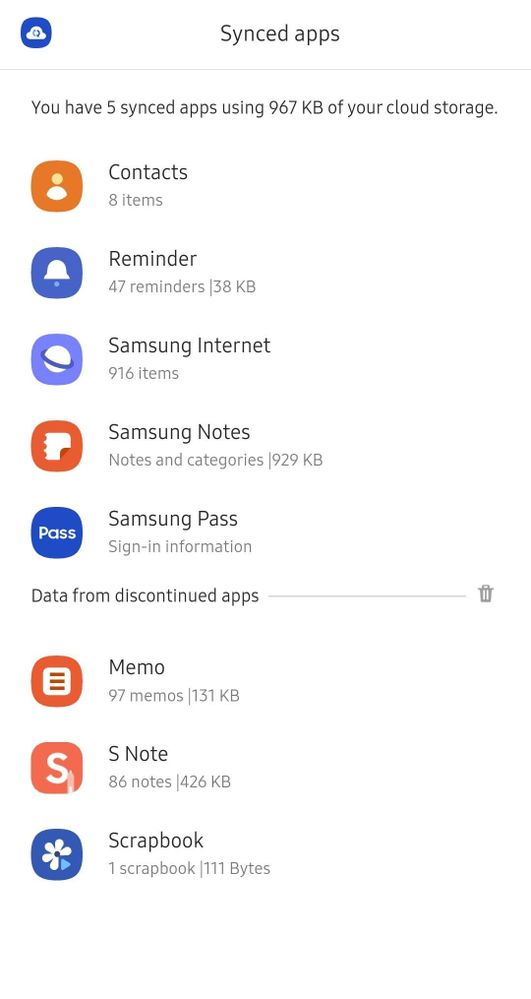 Mobile Apps & Services
You would need to install the discontinued apps so the data will sync and be accessible which may not be possible since they may not work on newer operating systems.
1 Like
Share
Reply

Mobile Apps & Services
I just sent a message for the whole post to you instead of replying to you directly. Sorry about that!

Thanks for your input. I did consider attempting to reinstall the apps but I couldn't find a trustworthy APK for them as there were lots that had different versions but same icon. I also considered that the sync endpoints will have been removed by Samsung by now and so they wouldn't be able to successfully sync, especially as I have 2FA turned on.

Thanks again for your response though.
0 Likes
Share
Reply

Mobile Apps & Services
Well I have found out quite alot about all this since I first posted.

Firstly, within Samsung Notes settings there is an option to "Import notes". From there I could import Scrapbook (there was none), Memos (47/97 only) and S Notes (apparently there are none). Suffice to say, that failed. I did lock some notes which may explain why some of them cant be downloaded but it certainly wasn't all of them!

Secondly, I knew that GDPR gives me the right to download all the data Samsung holds on me. Eventually I ended up at privacy.samsung.com which allowed me to request the download for Samsung Cloud. You can only download the whole lot (105MB for me, more if you have any media files) rather than selecting just the discontinued apps which was frustrating. Anyway, it completed today. I downloaded and extracted the files. 86 items in S-Note folder is correct but only 89/97 in K-Memo. Samsung Notes has roughly the same file size so I will presume that is OK.

The files right now need to be parsed in to something usable as S-Note are all xml files and K-Memo are .content.sync files so that will take a bit of reverse engineering. Its a start and I will update when I have finished parsing the files. I will also post any code I use to parse them with for others to use.

Mobile Apps & Services
Good digging. You can open the XML file in a browser or try https://notepad-plus-plus.org/

Mobile Apps & Services
Thanks. I'm mobile only at the moment so its going to be fun trying to deal with them! I enjoy this kind of stuff though.

For understanding the XML structure I have DroidEdit and Acode to help me. The .content.sync files sound proprietary though so I may have to utilise HexViewer to try work out what those ones are. Then again, in Samsung Notes, the .sdocx file is just a zip which contains xml data & images amongst other things so I may be lucky that these are similar. Once I know the file structure, I can use grep in Termux to parse the files in to something useful. I may be limited to just the raw text without styling and images but I dont know that yet. Better get started!
0 Likes
Share
Reply