Odyssey G7 - Screen stuck on black and OSD Menu does not show.

I just bought this maybe a month ago, so it has the newest firmware (I double checked after setting it up).  My pc went into sleep mode earlier but when I turned it back on nothing shows up at all. Just a black screen. Even pressing the menu joystick fails to get the OSD menu to show. I can turn the monitor off and on though.

Technically this happened twice now, the first time I was able to get it to come back after unplugging the power source from the monitor. But after a second time of going to sleep and turning my computer back on again, its back to all black. I've tried all manner of combination of unplugging power source and input source to no avail. I even tried the DP and HDMI wires on a different laptop and different monitor. They work fine, so its not the wires. I even tried the G7 on another laptop and still same black screen issue.

A couple times, the screen started to flicker back on to show my desktop but that never lasted more than .5 seconds. It did happen a few times. One "series" of flickers seemed to happen when I was messing with the power cord.

I'm not sure what to do at this point, I've even rebooted in safe mode and restarted, shut the computer down for a bit and turned it back on. But nothing. Everything else is fine, even the laptop recognizes that the G7 is plugged in and has it listed as one of the active monitors (I run a dual monitor set up, the G7 and a Lenovo, plus the laptop screen. Though generally I close the laptop lid and that screen is off).

any update on this issue? I just experienced it today and now my monitor has no display. It has power, I see the back light but I can't access the OSD.

I tried that, or at least I did if you meant hold down the menu button to "reset" it. No dice. I would see lights flicker on and off the first few times, but even after that nada.

Not a lot of great news. Samsung tried repairing it, twice. First time they replaced the mother board. It came back not working at first, but then flickered back and worked for a few hours. But then after resetting my computer it was back to black. Second time they replaced the display but it came back still not working at all. They wanted to try a third time, I sent it back, but then the third party service provider decided it was not worth another attempt and now Samsung is replacing it. They gave credit to the retailer that I bought it from and I'm currently in contact with them to get a new one sent to me.

I have exactly the  same issue, but on the G5, I don't think it likes the fact that I often switch beween 2nd a main display depending on the game i'm playing (some I prefer in the 4k laptop 60hz). It would flicker when I switched for a while the right itself. But, it should be robust enough to handle that as a gaming monitor. Oh well, looks like i'll be having a bit of "back and forth" with Samsung and the retailer!

Did you ever get this fixed or figured out?? My G9 just started doing this exact thing today out of nowhere and its severely upsetting me

I am facing this same issue after around the same time of owning the display.

Screen has been fine up until a couple days ago were I did have some very brief moments of flickering.

Today however is a different story. Worked fine for a few hours then after a period of 20 seconds of flickering the display stays black with visable backlight.

Could not access the OSD at all, unless I unplugged the DP cable and reset the monitor.

Reset the defaults and could then get picture at 60Hz, whenever I'd increase this same issue would eventually arise.

Now however, display is stuck on black backlit screen and I cannot get the OSD up no matter what I try.

UPDATE: After repeating the same steps as above I managed to get monitor back working again.

Set to 240Hz and HDR on as before and all seems fine.

Only differences I can think of is that A. It is cooler than it was before, so could have been a tempreature issue. B. When I unplugged from power, I also disconnect cable from the brick.

Too soon to be sure if I'm in the clear but thought I'd update.

It overheats. It's just that. Removing the plastic cover that masks cables helps a bit, but that's all you can do apart from literally drilling holes in the back cover. If you shine a light onto the back of the monitor you will see how small are the holes for ventilation. There are zero, holes in the bottom of the case to get any convection inside. 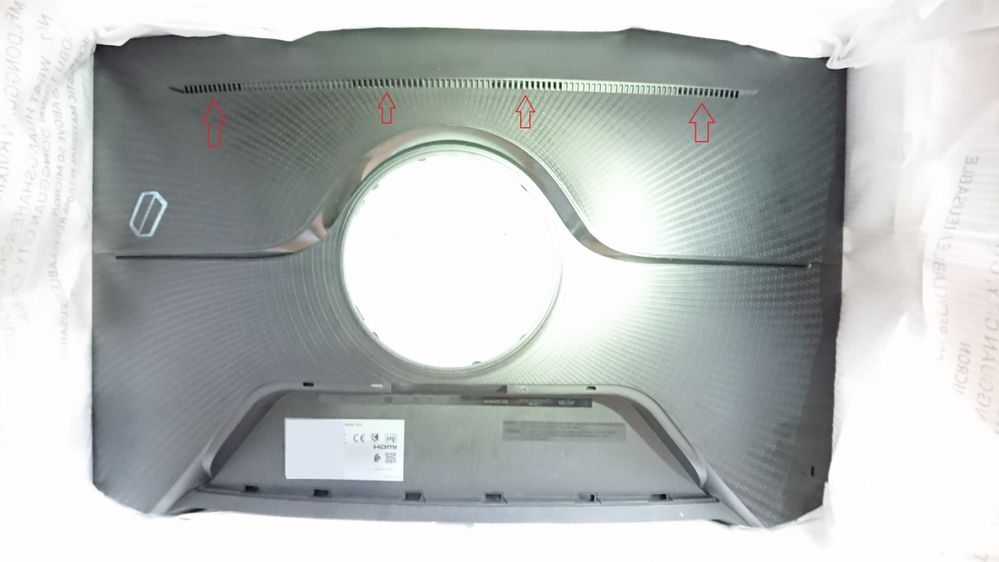