, new here, I've been seeking answers to the dreaded samsung server not found page that occurs on my samsung smart tv.

The model is ue65nu75000uxxu, its only 3 years old perfect condition, just this issue thats occurs along with the myserious space issue that i just reset it to overcome(wish you could erase the damned bbc player et all but hey, charged for the privilage)

the odd thing is that this issue now occurs when browsing numerous websites since the start f the year, I can now visit a website & it will open a new tab & show the dreaded error.

any advice would be welocme, also the samsung remote request has been ignored twice now, had numerous stupid answers from other sites such as use your phone or buy a nw tv, I can use my home computer or my sons phone but sometimes its handy to look up something using the smart tv app, have to say I was impressed with samsung but this lack of updeats for the TV's isn't endearing but samsungs tvs are best & they still do the curved ones...

If your Samsung TV says “Unable to connect to Samsung server” you need to reset your Network.

To do this, start by tapping on Source on your remote then go to Settings (gear icon bottom left) > Enter > General > Network > Reset Network.

Hi thansk for the reply, will answer in post thread

thanks again, I have tried ths, should add its my mums samsung so I'm just helping, sadly it doesn't seem to make much difference - we circle back to the outdated browsers idea which can't be updated due to the lack of internal memory.

I know you can add storage space but the smart tv internet is seprate so when we tried it we found you could not expand the intenal memory so is this an idea why its not working as it should...

by oing that though when we do a clean factory install, it should work as new, the times we've tried it - its almost immdiately the dreaded server not found.

have to say I did a third samsung reuqest for remote help(think its the third time) no reply so bit p###ed with that.

If anybodys asking why we want to keep this near perfct TV going, it the best one we've had, its curved & curved is kind of dead now along with 3d, VR & 4k stuff sadly... I go back to flat screens and its kind of wired,,,wierd sorry to watch a la liga game in flat after curved.

I have the same problem with my Smart TV J5500. At the beginnig I had access to websites but only for a few months.
I do not have access to websites and the message is the same 'Server Not Found'.
Obviously it is a problem that Samsung should be solve. 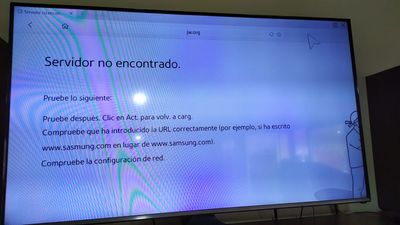