Coming from an original Galaxy Watch I had high hopes for the Galaxy Watch 4, expecting improved GPS tracking, stability and functionality... I'm disappointed to say it failed in all 3 categories on my first open water swim...

With the Galaxy Watch 1 i had some issues when I first got it a few years ago but nothing as bad as this and any minor issues were resolved quite quickly. It was quite good using Samsung Health to track, sync back to SHealth on the phone and sync to Strava. The GPS track was mostly ok with the occasional glitch which I accepted as fairly normal for open water swimming with a smartwatch, but hoped for some improvement in this department on the GW4.

However, on the Galaxy Watch 4... *facepalm*

Starting the swim using the Samsung Health "Swimming" (Open Water) option, it's the same as on the old Tizen powered Galaxy Watch, but here is where it goes down hill...

If you want to pause the swim, it's not as simple as pressing the back button, because you're in water lock mode, and pressing the back button for 2 seconds doesn't pause the swim (appears to be a bug since according to Samsung support this should work - https://eu.community.samsung.com/t5/wearables/galaxy-watch-4-pause-swimming-in-pool-with-buttons/td-...), the only way to pause the swim is to hold the home button for 2 seconds to get out of water lock mode, then swiping the wet screen (which has it's own issues) and pressing the pause button on the (wet) screen... 🙄 after a few times of doing this and with the pause and finish buttons on the screen being close to each other, the wet screen eventually caused the finish button to be pressed instead, finishing the swim when it shouldn't have. (Would be good to have an "are you sure you want to finish your swim" prompt at least to prevent this 🙄)

There is also no option like on earlier watches to enable "Screen always on" during the activity. (not the same as AOD).

On earlier Galaxy Watches, the "Average Pace" was time per 100m, now its time per km... Which is a bit 🙄 For running or cycling it makes sense pace per km, but not so much for swimming. But ok for some long distance swimmers it might be handy, at least give people the option to chose whether they want pace per 100m or pace per km.

Apart from the above, the biggest issue is the GPS track... The swim path appears to show correctly on the Galaxy Watch 4 itself within Samsung Health... but... 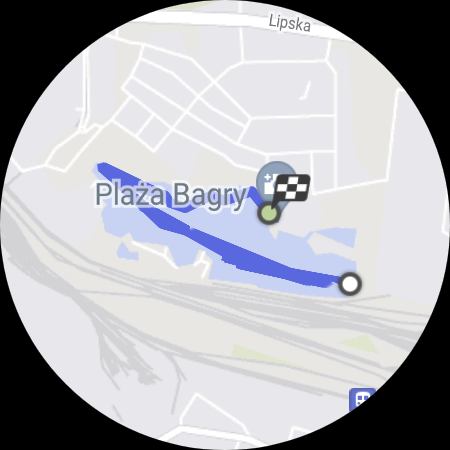 ...but, when you open the same swim in Samsung Health on the phone the GPS track is completely wrong? 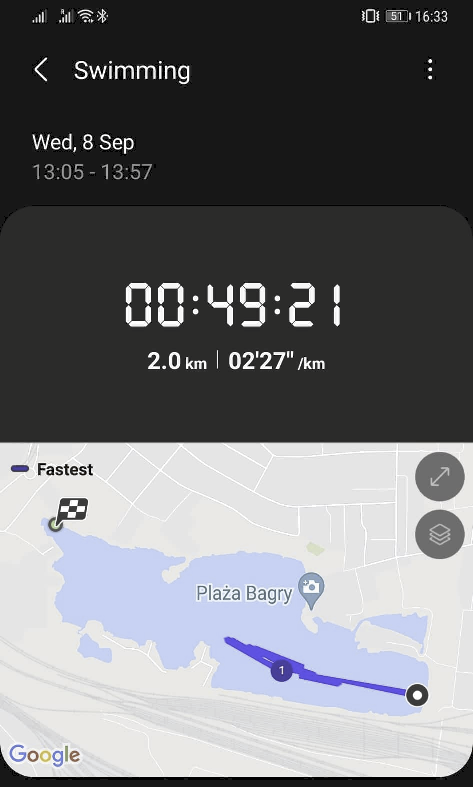 The track appears to finish halfway up the lake, with the "finish" flag randomly at the end of the lake (which is also wrong). Almost as though the track is somehow corrupt? But still it shows correctly when opened up on the watch. Because of this the swim also doesn't want to export to Strava or anywhere else. If i try to force it with Health Sync app, it exports the time and duration but not the GPS track.

I'm very disappointed to say the least... I'm going to give it another go in the coming days, will uninstall and reinstall Samsung health and see if the first try was just a one off glitch. I'm also going to disable the "improve location accuracy" option which uses wifi/mobile networks, I had issues on the original galaxy watch when that was enabled, but at the moment it doesn't look good *sigh*

**UPDATE1:**
Went for another swim today. Recorded two separate swims and these are my observations.

What I tried different from the first try: Reinstalled Samsung Health on both my phone and watch. Also under the location settings I disabled the "Improve Accuracy" which uses wifi and mobile networks (which I've had issues with before on original GW.) So only using GPS, which also on its own worked well on the original GW.

First swim - Fail.
GPS all over the place. The reason? I think it might be to do with pausing the swim half way through, which confuses the app or its unable to properly lock on after resuming the swim, who knows? I continued to swim with the stopwatch time going up, but the distance and average pace were both stuck on the same numbers... (this also happened on my initial swim a few days ago) 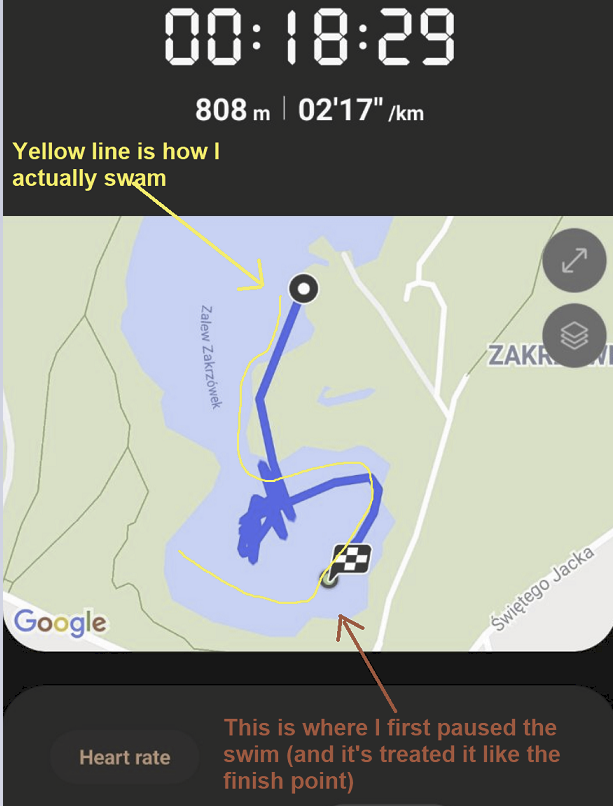 Second swim - Success - sort of. I didn't use the pause feature this time.

GPS is pretty much spot on. The swim transferred to the SHealth app on the phone... but still doesn't want to synchronize with Strava for some reason 🤦‍♂️ 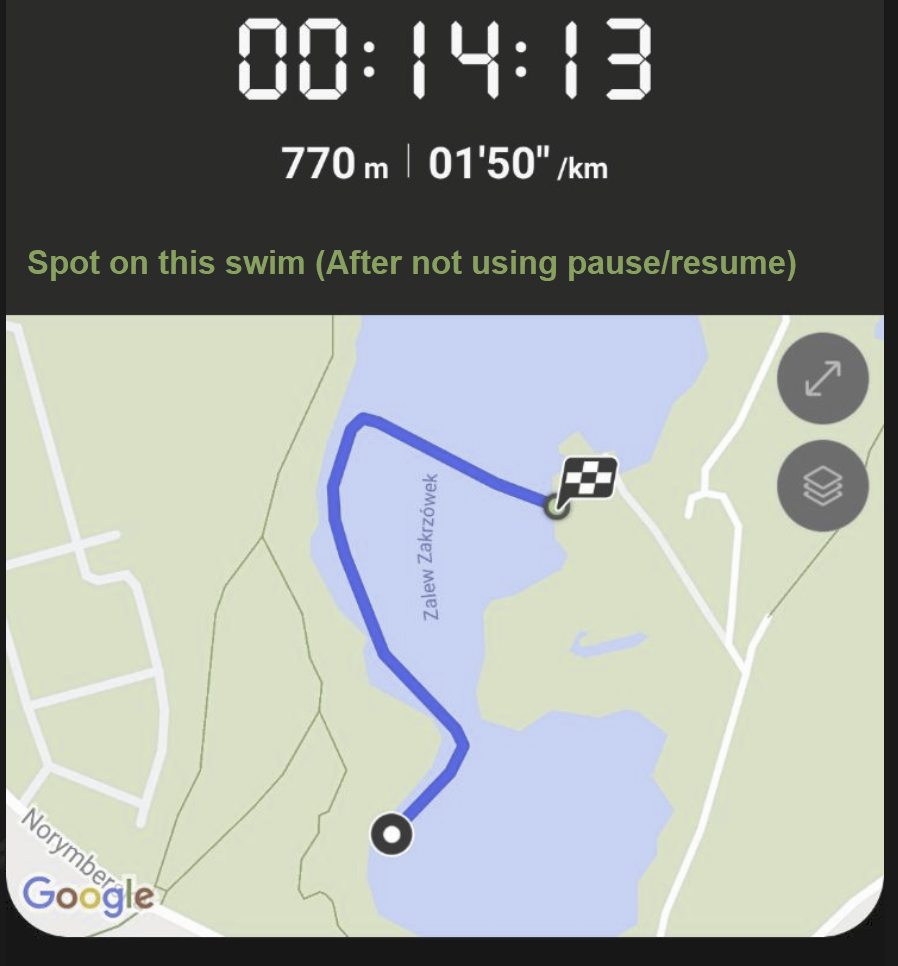 So far no swim has synchronised with Strava. I tested a different activity (walking) and it recorded it fine and sync'd to Strava almost instantly, so why not swimming?

What is your experience with swimming and recording it on the GW4 and Samsung Health? Any Suggestions?

completely agree, there are now several topics about the incredibly bad interface when it comes to pausing a swim / screen on but it seems there is only a standard answer from a moderator once then the topic will rest for good. no feedback from samsung at all if there is any plan to solve these bugs.

I can add that kayaking mode is a disappointment, too. When I use my Tic Watch Pro 3 GPS, this is what I get on my customary weekly paddling:

Tracking the same tour with the Galaxy Watch 4 a week later:

Not only was the GPS missing, but the battery was nearly drained, too. Probably because the display went on with each stroke (which is pointless since I am wearing my watch under my dry suit.)

So sports tracking needs to be improved! I have to add that cycling is superb, only the Suunto 7 creates nicer graphs.

I can add that kayaking mode is a disappointment, too. When I use my Tic Watch Pro 3 GPS, this is what I get on my customary weekly paddling:

Tracking the same tour with the Galaxy Watch 4 a week later:

Not only was the GPS missing, but the battery was nearly drained, too. Probably because the display went on with each stroke (which is pointless since I am wearing my watch under my dry suit.)

So sports tracking needs to be improved! I have to add that cycling is superb, only the Suunto 7 creates nicer graphs.

I originally posted my complaint about paddling in the US forum, not knowing there was a EU forum as well. Good news: My complaint has been heard by Samsung. Maybe there is hope.

Today, I tried out "Outdoor Swimming" on my weekly 12.8 km sea kayaking trip. The Galaxy Watch 4 Classic 46 mm got the time right (it was 1:55, but I did not stop the exercise correcly) but GPS was a joke: It tracked 10 m outside our kayak shed! To defend the watch: I was not submerged and I wore the watch under my dry top.

The thing that saved my day was that I passed the Royal yacht MS Norge. That's a rare sight in Bergen! 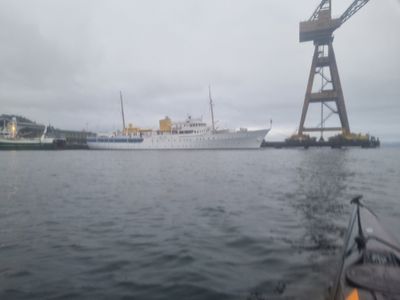 Next week I may try "Cycling" or "Hiking". Cycling mode works extremely well.

Had the same problem today on my first swim with my new watch. Very disappointed! This is why I bought it.

Wearables
Used it last night. I say used, because it's almost impossible to swipe the screen when wet to stop or pause the activity. Pretty poor show from Samsung. Use the buttons. Not hard.
0 Likes
Share
Reply

I am even surprised that you can still swim with the watch 4. My active 2 died other day after swimming 2nd time. It goes in reboot loop problem and eventually dying. Many people have that issue. Soon or later you will have this issue also. Because after the 1st version Samsung extended with microphone hole and water is going through this hole. They have added a stupid functionality to throw the water by keep pressing the power button when it is on water lock mode. First active version had no problem. I swam with it in the pool in the sea in the lake every where for more than 2 years and I am still having it without any problem. I havent ordered 4th version but probably it is same. So dissapointing for Samsung

For the time being, I swim 1.1 km per week with my Galaxy Watch 4 Classic on my left wrist in a 50 m pool. No issues with the watch so far!