BBC iPlayer: Why is the live UHD quality poor on my Samsung 2019 TV?

BBC say they’re working with Samsung on this, but I haven’t seen anything on the forum. If you’re having this issue, please add your voice to this request for a quick fix as the Euro’s are only on for 4 weeks!!! I have this issue on my Q900r. I have not bandwidth issues and my other apps. 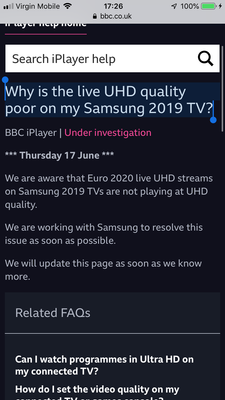 @Craig01  Looks like still to be sorted.   Do not have a 2019 model myself though to test.   Does anyone have any further information?

With regard to the UHD content   24MBit/s  required for the full 3840 pixel Ultra HD experience, or 12MBit/s for 2560 pixel Ultra HD.  However this must be another issue.

General information here including  list of all the UHD Euro matches, once again also UHD Wimbledon streams for Centre court starting 28 June.   some other programmes also available in the higher quality mode.

Thanks for taking the time to comment, it’s appreciated.

By way of an update:

I have a Q900r, which frustratingly only supports 100Mbs on both it’s Ethernet and Wireless ports! I have 600Mbs to my router, which drops to around 400Mbs in my TV room.

I’ve run BBC iPlayer in both main and Beta versions, the former is definitely more stable! The iPlayer UHD Loop test runs without issue under the main version of the app, but won’t run on the Beta.

I have been watching the Euro 2020 UHD Live feed on the main version and it runs perfectly  for approximately 10 minutes (I’ve timed it and it’s very constant at 10 minutes), then starts to buffer. If I drop the feed, then reload it, it works without issue for another 10 minutes!

I’ve checked the TV cache and RAM, both seem high at >80%. This high resource utilisation isn’t limited to BBC iPlayer, which is a concern! As such, I’ve got in the habit of cleaning Cache and RAM frequently.

Hope the above will prove helpful to our community 😊

HI @Craig01  Thank you for your input, yes good idea for customers  customer to check  standard and Beta versions but Beta seems a no go for Euro2020 UHD on your set even if standard not much better at the moment.    Yes clearing cache/Ram  may help.  Take it you have latest update for iplayer/Tv.    Have you tried Factory Reset, though may not make much difference.

Yes, running the latest TV firmware and iPlayer version. I've done multiple hard restarts on the TV. Reluctant to do a reset as it's a royal pain in the backside to get everything back to the current situation!

My 10 minutes feedback doesn't seem to be holding true over the course of the past 45 minutes, with more frequent reloads being required.

I strongly suspect that this is a BBC iPlayer server issue, and it seems that by trying multiple reloads you land on a decent server feed every now and again.

It also looks like this is related to Live UHD feeds as on-demand UHD BBC series content run without issue!