Tablets
I'm absolutely furious how the recent update has completely changed the way split screen works without any option to change it back to the old way - and no warning at all prior to the update.
The recent 3.0 One UI update has decreased the functionality of the split screen.
1. Only allowing app pairs
2. Not allowing integration or access to recent apps
3. Not allowing the quick swap of the left panel
4. Removing access to the homescreen whilst in split screen
5. Requiring you to make endless number of app pairs in order for you to just switch your set-up
6. Completely breaking the app pair if you press the home button.
7. Once in app pair mode - removing the individual app from your recents - making it inaccessible in full screen again
8. YouTube videos used to keep playing if on your right panel and you broke away from the split screen, now they just stop whatever you end up doing or switching too
9. If you're starting a splti screen, you most likely want to put it with one of the other recent apps you're just using. If that's not immediately in your edge app display - you have to schroll, or go through the gallery to find it - thus taking numerous extra steps just to start a split screen.
And the list goes on in a number of ways that have just made split screen useless.
You have to follow the updates in order to keep up with security updates - and often minor UI updates are welcome and OK.
But when you dramatically change the core functionality of certain aspects of the system - I suddenly have a different tablet to the one I paid for. And I spent a lot of money on the S7+ as well as time getting used to a certain workflow, expectations of functionality, and muscle memory on how these work.
This absolutely must be rolled back to it's former functionality - or at the very, very least- provide an option to use the same way as the old version. I'm certain there is no power user that would find this new version more useful.
Samsung should never make such a dramatic change to a function without initially allowing users to use it the old way if that's preferred for them.
This basically means I will not follow a system update again (because the same thing happened before years ago on my Galaxy Note 8 and it was ridiculous) - thus comprimising the security of my tablet.

Tablets
how do I cancel this useless app or whatever *****e it is. who ever designed it wants to keep off the substances. total garbage
0 Likes
Share
Reply

Tablets
I prefer Samsung Experience on my Maple Gold Note 8 hated One Ui so when I got a.new Note 8 my old one had battery issues so got another one not updating it but I have it now still hate it for instance you can keep the back,home and tasks bar locked or hidden away for more screen now it's just locked
0 Likes
Share
Reply

Tablets
I'm not experiencing some of the problems you are describing, see screenshots...I can open a 3 way split screen, I can access the home screen while in split screen, the split screen stays paired in recent apps? 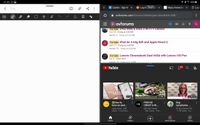 Tablets
Have a watch of this video on YouTube, in my opinion it is much better now!

Tablets
Before when you selected for recent apps - the panel on the left would be the one you could quickly swap for an app you already had open. You could also then click on the background to go to your homescreen and go from there - whilst still keeping the other apps open.

It's fine that it keeps the 2 or 3 apps connected in your recent apps - but you can only go to the apps edge screen to select or drag new apps in.

If you select recent apps - it hides your three apps - you can select another app from recent, but if you drag it into pop up - it just goes to your home screen - not the split apps you already had open.

It's added multiple pointless steps to do what you need to, and it frankly made it completley unusable if you're using it to work between multiple apps - say 3 -5.

Additionally it pauses youtube videos if that's one of the apps you had on the right panel. So it completely disrupts everything
2 Likes
Share
Reply

Tablets
Yeah I watched this yesterday - this guy is looking at it superficially. In practice it's completley broken.
2 Likes
Share
Reply

Tablets
Galaxy Note 8 was the last good phone Samsung made. They made enormous improvements with Dex which is great but these pointless features like 5X Zoom, poor exonyos chips and terrible battery have begun to break the once brilliant eco system.
1 Like
Share
Reply

Tablets
Downgrade using smartswitch or odin if you are that unhappy about the changes?
0 Likes
Share
Reply

Tablets
Btw, you can open apps in pop up screen over your split screen by using the Edge panel, drag the app from the panel into the middle of the screen, rather than use the recent apps draw.

Personally I find it easy enough to switch one of the split screen apps using the edge panel.
0 Likes
Share
Reply