Home Appliances
Do you know that crushing feeling when you've paid over £1,000 for a vacuum cleaner only to be completely disappointed?
I'll try and share my frustrations in a clear and concise way:
Navigation
This bot is continually getting confused by one area of my flat. It isn't becoming stuck on anything, it just keeps going back and fourth over the same 3x1ft area and looks as if it is becoming confused by something that isn't there. The bot keeps shifting forward slightly at different angles.
I'll try and attach a video. I've tried submitting an error report on Samsung Members but can't attach video to the report?!
Cleaning
This bot can't even pick up small bits of fluff from on the surface of medium pile carpet. I've even tried manually setting the suction power to maximum and it just doesn't make a difference. The roller brush seems more adapted to hard floor rather than carpet.
SmartThings App
This particularly is annoying. It's not an issue that's a deal breaker like the two above, but its an issue that's so basic you wonder how can Samsung ship software this poor? Basically I'm using a Samsung Galaxy Z Fold 2 5G and the robot vacuum add-on for SmartThings doesn't support a fold/tablet layout. I'm left with a narrow phone UI in the center of the screen. How are Samsung not producing software that's fully compatible with thier phones?!
Who on earth can I contact about these issues considering Samsung doesn't allow videos of how screwed up the navigation is?
I would seriously avoid this product. I want to like it but seeing as Samsung support is so poor (last time I spoke to support on the phone, they made me run software diagnostics as per their script despite the fact I was calling for a cracked screen....), I have no idea who to work with to resolve these issues. 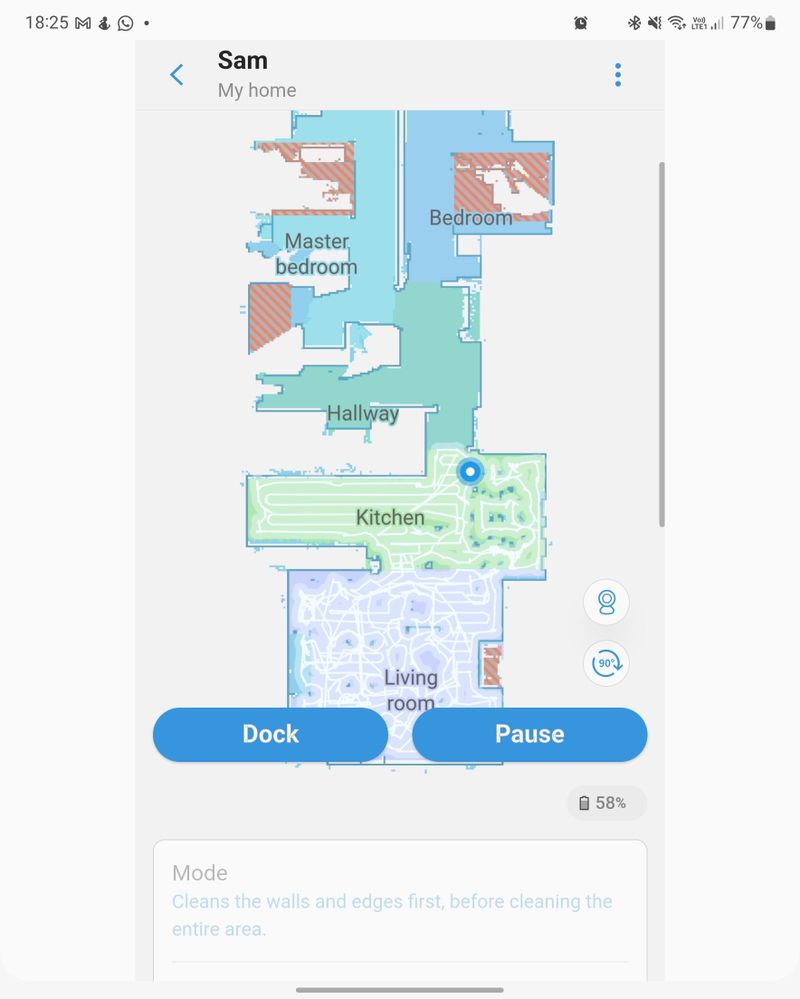 Home Appliances
I know your pain. The Smartthings App is poor with the JetBot, I don't have the range of options I was lead to believe on the Samsung site. Can't manage maps, can't create a schedule etc.

I have spent a week trying to get support from Samsung and Smartthings. Such a big company, but poor support. Why this product does not have its own App is beyond me.
1 Like
Share
Reply

Home Appliances
I love the robot but the mine also takes ages to go to the dock.
1 Like
Share
Reply

Home Appliances
Yeah robot is as good as useless on carpet. I've lodged a complaint and will keep going untill I can get it raised with the ombudsman.
1 Like
Share
Reply

Home Appliances
Hi alexmadg, have you heard back about your complaint? I've had the bot for 9 months now and it's hardly used due to its poor cleaning ability. I'm gobsmacked Samsung haven't bothered to do the simple thing of releasing a replacement brush that's not useless on anything but hard floor like the current one. I have a video of it performing very poorly on carpet, I'll see how I can upload it.
0 Likes
Share
Reply

Home Appliances
Sadly we iv not had time to follow up on this I just won't buy Samsung products again they basically said yeah it's useless, so what. I'm just done with Samsung completely now.
0 Likes
Share
Reply