Rust on back of fridge caused damage

We bought a new Samsung refrigerator about six years ago and immediately noticed condensation on the back of the unit, opposite of where the ice unit is located on the inside, was starting to rust the metal.  This area is very cold, almost as if there's no insulation between the inside and the back of the unit. I attempted to add more insulation on the outside, which solved the condensation problem, however, the ice maker then froze up inside so I had to remove it.  Having forgotten about the problem, I recently pulled the fridge out and found that the rust from the condensation had damaged the floor and wall from dripping so badly during humid weather.   This is very frustrating and I wouldn't expect issues like this.  Has anyone else had this problem? 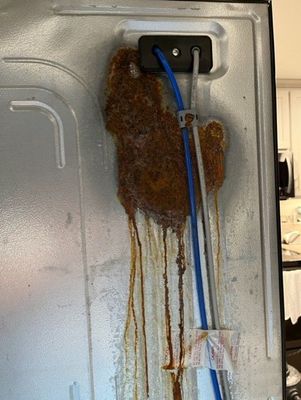