Hi, so I bought a galaxy s20 unlocked from Samsung last April for a while now I've been kind of confused as to why my signal never shows that it's in 4g. I've contacted my carrier and they've assured me that my phone is running on 4g data. Its a very obscure network company (h2o wireless) But I have no options under mobile networks for anything higher then 2g/3g/LTE. I was also told that my Sim card was not a factor as well.

I've tried resting my phones wireless networks. And clearing out the cache after rebooting in safe mode. But to no avail. I don't know why the option for 4g won't even show up much less 5g.

Galaxy S20 Series
Please can you confirm the exact model of your phone and the current software version. This can be found in settings, about phone
RETIRED
0 Likes
Share
Reply

And it's running on the android 11.

Galaxy S20 Series
Please see my post above and let me know your baseband version. Also, please go to Play Store and download Devcheck app and report back with the processor info under the hardware tab.
RETIRED
0 Likes
Share
Reply 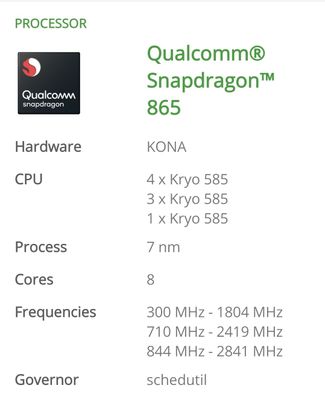 here is the info sorry it took so long to respond.