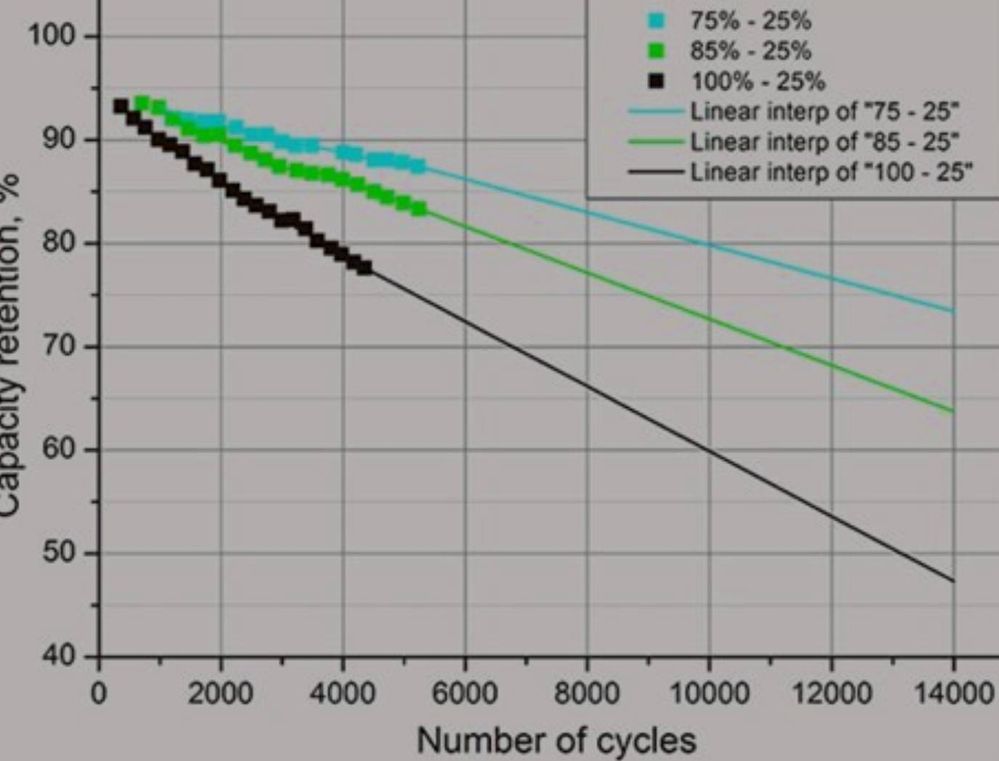 Do not rely on the actual cycle values here, this graph demonstrates the trend of capacity retention in regards to charging behaviour. Not specifically in small capacity lithium cells such as in a mobile device.

What a good charge/discharge habit looks like. Lots of smaller charges and discharges rather than long discharges and long charges.
OVERALL, there are numerous tips here, not all have the same effect as eachother, some have a much larger influence over the battery than others. Incorporate what you can, not everyone can do all of these, based on your job, personal preference or usage habits, but try to adjust your habits if you can. And any questions feel free to ask!
6 Likes
Share
Reply
13 REPLIES 13

Galaxy Note10 Series
Fantastic amount of detail and a well deserved like for a very thorough analysis. On my laptop I use an app called battery care and I set my limits between 25 and 85%. I may change the lower figure to 30 now I've seen this but also try do more mini charges too.

What frustrates me for my phone is that 'environment' is always mentioned in the battery care app within Galaxy labs but my environment is not hot. I even sat it without a case on a cold marble worktop in my icy cold kitchen with the Ram cleared, battery saver mode on, etc etc etc and still it says environment. I don't live in the Bahamas, I live I in a old cold house in Scotland and I hate my room to be anywhere near 'hot'. The app shows he CPU is hot moreso but my battery usually never goes higher than the middle emoji tier.

I'm currently getting rid of apps I don't use or would use so rarely I'd be fine downloading them again if needs be. Also I'm about to deep sleep apps again as I started yesterday but my ADHD can lead me astray.

Then when it comes to permissions I half know what is needed by the app and what's not, but so often I'm too scared to turn off the ones I'm unsure of. I've been putting it off but I'm going to do it now. You taught me some stuff I didn't know so thanks I appreciate it. I used to use slow chargers overnight to try not let it hang on 100 for ages but now I charge to 85 or 90 depending on what I'm doing, even 100 occasionally then putting it on flight mode and battery saver, no WiFi, Bluetooth, nothing and in the morning it's dropped maybe 5%. I'd turn the phone off completely but the hassle of rebooting a phone in the morning is to much for me. On my previous Sony phone I could stop my phone charging once it hit 90 I believe. Does Samsung have this function anywhere?

Most people, especially colleagues, I've told this stuff to about the 'lengths' I go to keep my phone the best, they think I'm crazy or OCD. I'm just a bit obsessive about optimising everything. Grin my room layout, to well most thing basically, if you put in the time you lose out in the short term in time but you gain so much in the l long term. Weird connection but I am often an insufferable perfectionist.

Galaxy Note10 Series
One last thing, any app recommendations? What browser do you use for example.
0 Likes
Share
Reply

Galaxy Note10 Series
I think the galaxy labs thermal guardian isn't that good for anything more than a graphical representation of how your battery temp changes throughout the day. It doesn't give any specify values and its reasoning, like you said "environment" is most likely just simple programming. So if the temperature is above a certain value, and it isn't because of reason X or Y then they assume that it must be the environment so it gives you that message.

As for the charge limiting function, Samsung have started this with some of their newer tablets. My galaxy tab S5e has a setting which will stop the charge at 85%. But what it also does is change how your battery % is calculated. So when your battery shows 100%, it is actually only 85%. It can be toggled on and off and requires a restart to take effect. The samsung phones don't have this feature however. But i use a macro app to monitor my battery % and temps, and give me alerts when needed.
1 Like
Share
Reply

Galaxy Note10 Series
I use a mixture of duckduckgo browser on my phone, for its privacy settings, and samsung Internet beta, just because I've always used it so im I'm familiar with it.

1) ampere, it let's me monitor my battery temp, battery voltage and charging and discharging current, and also has a 1x1 size widget so i never have to launch the app to see this info. It is free but has a paid version, i have the paid version.

2) netguard, i think i mentioned it in the post, but its a free and open source firewall app, it uses a vpn to filter all your phones traffic so you can individually choose on an app by app basis which apps can or can't use WiFi and/or cellular data. Its great for privacy, and great for stopping apps using data in the background.

3) macrodroid, an macro app with an endless amount of things you can automate, very intuitive interface, and lots of tutorials online and templates available in the app. It is free but has a paid version, of which i have.
1 Like
Share
Reply

Galaxy Note10 Series
I will test out your recommendations thank you. I'm just trying to find the optimal middle ground between battery life, functionality, privacy and making the most of the features within the phone I paid for and its hard.

I'm not throwing myself into detailed research such as yours and that's why it's great to see someone throw it out here on their own time in a digestable way. I find research difficult these days, even though I weirdly graduated from uni which requires lots of research but since lockdown distractions dominate my mind, it wanders from one thing to another like crazy. I'll work on something for 5 minutes before switching or worse adding in another thing then another, then boom I'm spinning too many plates and they all l ears to nothing.

I've been basically focusing on streamlining my life, but moreso my digital 'life' because that's the one that's a mess. I've used a lot of browsers like Brave, duckduckgo, Microft Edge, etc and they are usually the culprits in the high CPU usage category.
0 Likes
Share
Reply

Galaxy Note10 Series
I use McAfee Total Protection and from battery and CPU usage it never hogs more than a couple of percent a day, from what I can see it's doing as good a job as it claims (minimize CPU usage and slowdown etc). I never bought it though it was just bundled with Microsoft 365 family which is sold in Argos sporadically for £39.99 alongside McAfee Total Family. Its too good not to buy for the storage cost and security (£3.33 a month when just Microsoft 365 single user is £79.99 or £7.99 a month from their website. Now i'm depending on cloud storage with the S21 and likely all future phones I bought 5 so I'm good to 2026 haha. I wouldn't touch McAfee with a bargepole back in the day but it seems fine, do you see any need for me to go for that or should I just keep what I've got? It's got a VPN but I've also got NordVPN too.
0 Likes
Share
Reply

Galaxy Note10 Series
Are you talking about on PC or mobile?
0 Likes
Share
Reply

Galaxy Note10 Series
In this context mobile, but I similarly use the same on my Laptop.
0 Likes
Share
Reply