I have just upgraded my HP Envy laptop from a HDD to the SSD, in particular the Samsung 870 QVO 1TB drive..

Reading on the web I notice that SSD's have a lifespan and this drive is warranted from Samsung for 3 years or 360TBW..

Using there software it shows that since I installed it on Friday 4th December it has written 562GB which for just over a week seems a lot..

I presume this included the initial "clone" of the HDD I did which is 204GB plus through an issue I caused I did a restore from an image so that would be included..

Should I be concerned how mush data is written to the drive? and have any of you had a short lifespan of the SSD?

I did run Crystal Disc Info which puts the drive at good and 99% but as there is no decimal point that could be between 99-100%... maybe it is a false reading due to the initial data write in a short time with the clone of the old HDD 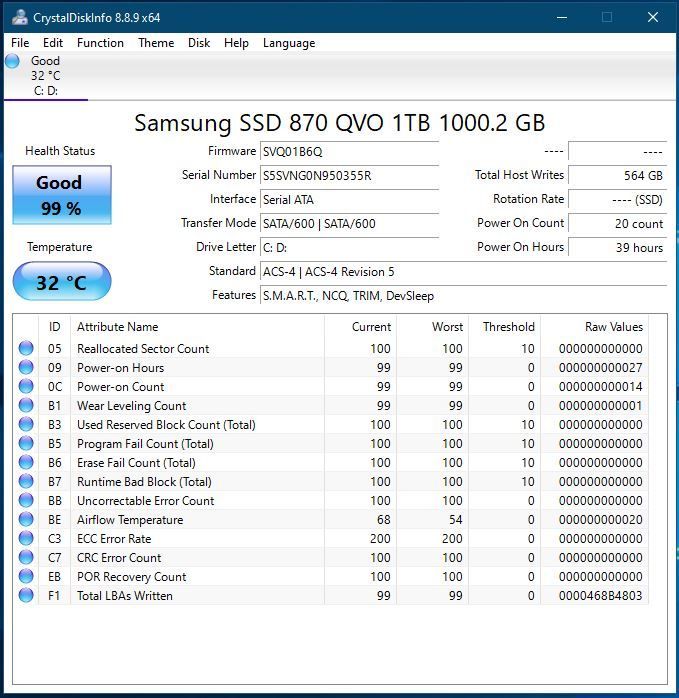 I must say it has made a great difference to this laptop, it boots in 20 seconds now rather than up to a couple of minutes and seems so much smoother

Any advice to a new to SSD user

Computers & IT
Wouldn't worry about it. You'll probably never write enough to it for it to fail. We are talking many many terabytes. If you had a cheaper brand you may well be concerned. Gradually the capacity of the drive will reduce as the cells can no longer be written to. This will be very gradual, very slow. Make sure you install magician and get the firmware updates as they come out.
0 Likes
Share
Reply

Thanks for the reply I will see how it goes, just wondered more why it dropped to 99% after a week or so