So I built a new computer this year. But I took my old SSD disk from my old PC, a Samsung 840 Evo 250gb SSD with driver version EXT0DB6Q.

In the Samsung Magician app under "driver details" it says that my hard drive isn't activated with AHCI mode.

I checked in bios and AHCI looks like its "on" in there though..

But i'm not sure if its really on.. I think it was "faster" on my older rig with Win 7.

I'm wondering though, in the magician app. It says under "driver details" that  the NVMe driver is "Microsoft", is this correct? Is there any other driver for it, maybe one that works better from Samsung perhaps?

If so how do I install it, because I havn't found any driver on the samsung site?

Computers & IT
The nvme driver is correct, Samsung have not created one for the 980 Pro. Download and install the latest driver set from AMD for the B550 chipset if you have not already from support.amd.com (not the RAID drivers)
0 Likes
Share
Reply

I did install the latest chipset driver but it still says, "AHCI deacivated" in the Samsung Magician application. I dont know, could it be acivated though? I mean in bios it's "on"..

Is this result normal/good or bad? Why does it write "2652", shouldn't it be more like the "Read" result? 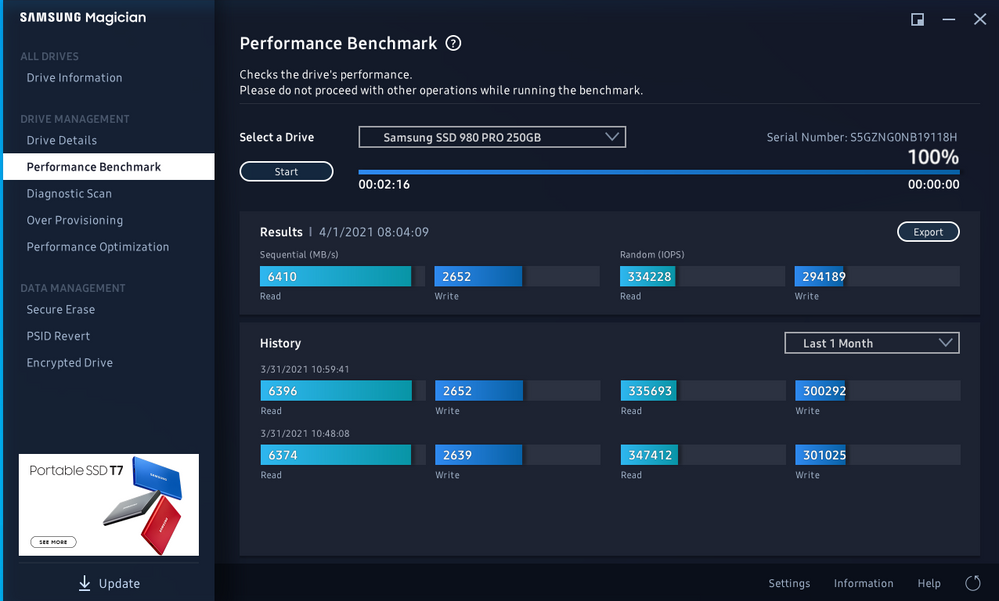 Computers & IT
The 250GB version is rated for the speeds you are already getting so ignore the AHCI warning for now but feed it back to Samsung technical support because they will need to improve detection. Click show more specs on this page: https://www.samsung.com/semiconductor/minisite/ssd/product/consumer/980pro/

Also, check for motherboard firmware updates and apply the latest one if yours is out of date. With Ryzen systems it pays to stay current with AGESA builds.
0 Likes
Share
Reply

About my "Samsung 840 Evo 250 gb SSD", where I have the "AHCI deactivated" problem. How do I get in contact with Samsung technical support about that? I haven't found any email adress..

I also did install the latest BIOS firmware for my motherboard. Unfortunately it didn't solve the "AHCI deactivated" problem though.

Thanks for all your help mate!