I run a 970 EVO Plus 500GB as my boot drive in my PC. The last few months, I've noticed in the disk de-frag menu that it comes up with a some random label, and optimisation or analysis is not available.

After running a chkdsk in command prompt, I rebooted the system to let the scan run. However, it shows the "Scanning and repairing drive C:/", boots into Windows as though nothing has happened, and then continues to show errors. Event Viewer has also noted that it still needs to be taken offline to perform a chkdsk, even though at this point, every single time I boot up the PC it supposedly runs the scan. Every time. And still nothing has changed.

I've also noticed Event Viewer throwing up a few other errors to do with disk scans, but on a seemingly unknown volume. Examples of C:/ and the others below. Interestingly, the error for C:/ seems to be thrown up twice, although based on timestamps this may well be when I shut off the PC. The other unnamed volume errors show up mid-use as far as I can tell. 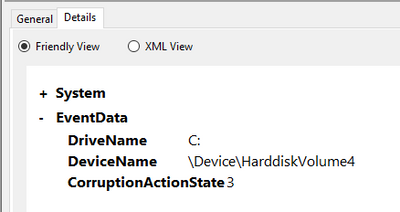 I ran a few Samsung Magician scans; they seem to show up as alright, but the fact that Windows is reporting errors still worries me. Both a short and extended SMART self test seem to show the drive as fine. Performance Benchmark, however seems to show the sequential write as quite slow... I think?

However, a quick flick to the Over Provisioning tab shows that it does think it's corrupted.

I'm stuck. I don't know what to do to diagnose this further. I reach dead end after dead end, and the longer I wait the more concerned I get. I'd rather not have to buy another drive - I don't exactly have the money to throw at a new one right now.

Any help would be greatly appreciated.

Computers & IT
Which build of Windows are you using? If it's unpatched W10 20H1 there's an optimisation bug that destroys SSD drives by continuously optimising them because it fails to record the job has been done.

You may be able to still use the drive but a clean installation will be required if the partition is badly corrupted. I don't suppose you took a drive image at some point you could try restoring from?
0 Likes
Share
Reply

I've had the issue through several Windows patches, plus I'm on 20H2 so I doubt it's that issue. In terms of drive images, would a simple restore point do? I have one, but not sure if it would work, plus it was only made in the last week, so I don't know if that would resolve the issue or not.

Apologies. I know this is now an old thread. This matter completely slipped from my mind. Amazingly the PC is still running fine.

I have just two questions (my knowledge of drives only goes so far) - would the backup not copy the corrupted data? If so, I presume I will merely have to buy a new drive. If it doesn't, and the drive is still usable after a fresh install, then bingo, there's my solution. I will try this first.

Any suggestions on software to use to perform this?

Computers & IT
Not if the backup predated the corruption. The existing drive should still work fine after a clean install but as it appears to work okay at present you could leave well alone until such time Windows itself goes belly up...
0 Likes
Share
Reply