Ignoring that Spotify uses approx 20% per hour of the battery during offline/streaming playback I have noticed that the Spotify App always seems to be running and according to my 'test' outlined below uses 5%+ of a full charge even if you never open the app. This seems wrong to me. 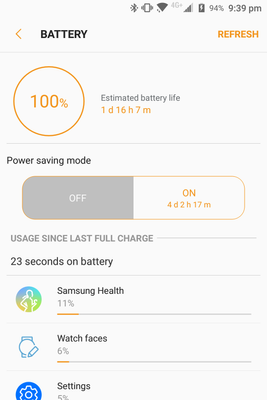 Spotify Installed, watched switched off battery recharged to 100% and then switched on. 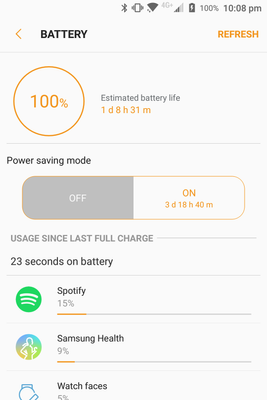 After 1.5 days normal Usage - 56% battery used - 12% on Spotify despite the app not being opened. That is 6% of full charge going on an app that is never opened (nor added as f widget) etc. 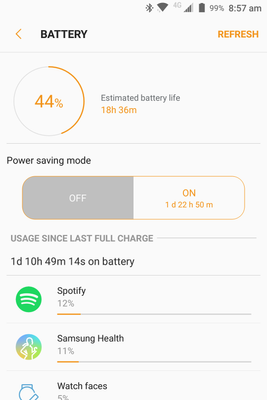 RandomGuy
First Poster
In response to Kondek85
As I said - even if I don't open it it still uses battery. It can use 1-2% if your other apps consume a lot. But I use relatively power effecient watch face. ( black without a lot of graphics that is not on by default).
In my case it uses ~5% even without actively using it.
0 Likes
Reply
Highlighted

JK2017
Pathfinder
In response to RandomGuy

@RandomGuy- oddly despite being the one the started this thread, I have now had a couple of times when having restarted my watch Spotify does not run until I open the app. I have no idea what/if anything I have done differently.

I did delete the 'unnecessary data' via the Galaxy app on my phone. I then downloaded playlists again to the watch. Will see how it goes over the next couple of charges.

It is the app and to do with being logged in and imo having to use the app for offline music. I don't think it shuts down fully even though it suggests it has been.

Streaming offline tracks will use a lot more battery than using it as a remote.

46mm does have a much bigger battery, I am getting 2 days with non-streaming Spotify on my 42mm with bluetooth, hrm, location on all the time.

Kondek85
Navigator
In response to JK2017

Yeah I know the battery is much bigger, about 22% I think but previously I posted you a pic of battery stats of m girlfriends 42mm watch when she had 69% battery left the estimated time was still higher than your on 100% so that's why it looks strange for me.

Just courioc, how does the streaming over WiFi works? What is the source of the music and do you have to still be connected to the phone or just to WiFi network? And how do you listen to it? On wired earphones or BT headset? Never used that before and I completely don't know how it works

I'd be interested in your partner's setup. I am just charging to 100% and will see what the estimated time is now it doesn't seem to be starting Spotify automatically.

Streaming means you are accessing your Spotify account online so can play all your playlists etc whether they are downloaded or not. I connect to Bluetooth headphones but you can use the speaker on the watch (that uses some serious battery).

However, I download two or three playlists to my watch (could easily fit more on) so I don't have to take my phone to the gym and it works quite well.

The functionality of streaming in the app isn't as great as 'remote' as you can't access your albums etc; they only allow playlists and "my collections" which I think is like recently played. You can access other Spotify suggested playlists though. I guess Spoitfy don't want to give you extra functionality as it is an additional device and they aren't getting any additional revenue from you.

@Kondek85Can you confirm if your G'friend was using the heart rate monitor as set to 'always', 'frequently' or 'never'?

I'm having the same issue.  However I noticed what is happening.  After a full charge, the "usage since last full charge " list is not resetting.  It is just carrying over the info and usage from past use and creating a cumulative usage list.  I've tried rebooting the watch  refreshing the list and nothing resets the list so you can track the usage of each charge.  The list I get after a full charge and never using Spotify during the last charge cycle, nor opening it at the start of the new charge, says it has used 31% of a battery 100% charged.

JK2017
Pathfinder
In response to TyWebb

I am not sure it is carrying over - I suspect it is still connected. But you will know as it will accelerate battery drain when not even using spotify.

That's said I have done a few new tests and things seemed to have improved; with spotify not installed, with it installed and with it signed in but using spotify on phone only.

This time around it doesn't seem to connecting spotify after a restart and I am getting expected battery length out of the watch.

Next test is with downloaded Playlists. If that doesn't cause any issues I will have to assume issue is fixed or it was a conflict with another app.

With me, it's definitely carrying over.

During my 1st full charge period it gave me a prediction of 3 days 14 hrs.  I used Spotify during an hour workout (offine use with a downloaded playlist) and it drained the battery 20%.  I used it again the next day for about 45 minutes and it drained another 15%.  I did use it (Spotify briefly) a couple other times.  That charge ended up lasting less than 2 days and before I charged it it showed Spotify used 45% of overall battery usage.

I recharged to full and when I refreshed the usage list, Spotify was still there at 45%.  Again it predicted about 3 and a half days of battery life.  During that period, I forced spotted the Spotify app to make sure it wasn't running and didn't use Spotify at all.  I ended up getting about 4 days off that charge. I periodically checked the usage list and the Spotify % slowly decreased.

At the end of that 2nd charge cycle, Spotify was down to 35%.

I recharged again, refreshed the "usage since last full charge", even rebooted the watch.   Spotify still showed up on the list at 31%.  I'm 24 hrs into this next cycle and the Spotify % is continuing to drop and I'm getting a prediction of about 4 days total battery life.

So it only drained for me when I actually used Spotify during that 1st charge.  Haven't used it since, and am getting great battery life, but Spotify is still showing up on the list, but with a decreasing %.    The "usage after last full charge" is simply not resetting for me.

And, yes, using spotify offine with a downloaded playlist definitely drains the battery fast.  I get about 2 days with Spotify use and 4 days without.

I also want to add for others...

Using Spotify offline does drain the battery significantly, using it as a remote to play the music through your phone does not.  Also, the process of downloading your songs/playlists to your watch also uses alot of the battery.

My hope is that Samsung and Spotify get together to improve the battery usage issue when listening offline, since this function has been part of there marketing strategy to sell their watches.