Back in November 2020 the YouTube app on the Samsung TVs from 2018 and older were having problems after a big Samsung software program update which automatically installed on the TVs. At first Samsung blamed YouTube, and of course YouTube blamed Samsung back... It was a lot of work and frustration ! This was over 6+ months period til the new software arrived and fixed the problem: Constant buffering while watching 4K, 1440p, 1080p and even 720p. on the TV's own YouTube app, but on the TV's own internet bowser the 4K videos on YouTube worked flawlessly - so it was only the YouTube app that was affected after the Samsung software program in November 2020. This was reported worldwide - on the UK (EU), Nordic and US Samsung forum - and on other forum. The US forum manager banned a lot of us who reported this, and even deleted postings and whole treads, while the UK and Nordic forum actually did not. The US forum claimed it was a problem with the TV's own wireless board, and closed the one thread that they did not delete as "solved" - but months later it turned out it was the Samsung software update all along, and not a defect/damaged wireless board. The UK and Nordic forum on the other hand acknowledged the actual problem about one or two months in - that it was an error in the Samsung's own recent software update at the time.

I was chosen to install a test software program from Samsung directly that solved the issues I had completely - this was a few months after the constant problem had occurred and me being in touch with a very kind and helpful forum manager. This was months before the new official Samsung software update fixed it for others.

Now today the 4K videos on the YouTube app on the TV is having a similar problem - but this seems to only be on the 4K (and so far not when switching to 1440p or lower resolution). It stops and buffers, plays for a second and then stops again, then repeat..... And on the TV's own browser there is no issue playing 4K YouTube videos - so once again it is the YouTube app problem. I can see on the play-"line" on the bottom of the 4K YouTube video does not download with enough space to play vs. the speed of the app is downloading. - but when using the TV's own internet browser the 4K YouTube video seems to have a better downloading speed to play the 4K videos without any buffering or freezing/stop.

I have no issue with my iPhone or 16" MacBook Pro (2019) - and have done an internet speed test on each device: my Samsung TV, my iPhone and MacBook Pro - in which the speed test shows that my TV (though my TV's internet browser) only receives between 24-36 Mbps, while both my iPhone and MacBook Pro receives over a 100 Mbps. - so maybe the issue is there, or it is back to a YouTube app problem on my TV's program software. I also notice that on the YouTube app 4K videos automatically starts at 1440p (1440p 60Hz), and I have to manually change to 4K.

Hopefully this is only a temporary problem, and will not turn into months of frustration.... It is no fun having a 75" 8K Samsung TV that will never play 8K, but 4K60Hz at best, because Samsung did NEVER upgrade promised upgrade the TV to true HDMI 2.1 port(s) - but a mystery port which they still cannot disclose but only a promise it will accept 8K60Hz (which it will never do as it also does not have the AV1 codec). Then months of frustration of the 6+ months YouTube constant 4K-720p. problem during lockdown. And now, after it was acknowledged and fixed, the problem has (maybe) started again, which I am now reporting (Day 1 - Monday 26th. December 2022).

Some might ask why I do not use a 4K Apple TV or Chrome Cast (or other external media player device) is because the YouTube app should work, and has been working for many months now without any issues. Plus I have been waiting and hoping for Apple TV / Chrome Cast to release an 8K version, which would also hopefully have the AV1 codex, so I could finally MAYBE watch 8K on my 8K TV - but this seems to be delayed.... Some claims it is possible to watch 8K on this TV model if you have a very expensive graphic card on your computer when connected to the TV.... So much work and so much frustration and stress - not just for me, but so many others who bought this so called 8K TV that once again has a 4K issue....

I have also reported this recurring/new issue to YouTube.

It seems as though the problem has fixed itself. I am now getting a much better reading with a 71.32 Mbps. download speed when testing my TV's own browser... 4K and 4K60Hz. videos on YouTube works fine now again.

Just a small update: Everything seems to still be working well. To me it seems the problem was in the WiFi network or internet connection. I did another test yesterday and the TV's own internet browser did 102.88 Mbps in Downloads, and 10.43 Mbps in Uploads. So no issues with the playing 4K60Hz in the TV's own YouTube app.

By the way, I am not so familiar with the Ping, so can anyone tell me if the "116", "184" and "50" is good in this speed test ? I think this has to do with how stabile the internet connection to my TV and other WiFi connected devices operate with connection to the internet. I still have some delays in the miniature pictures of each photo - both in the YouTube "newsfeed", my subscription videos, etc. I also sometimes experience that movies and TV-shows on the HBO Max and Play TV2 app stops - and maybe it has to do with the "ping" or WiFi-/internet connection... I know I should try out using a cable connected internet, but I wanted to learn more about things and issues. I do not want to buy an Apple TV or Chromecast device for these things yet, as I have been hoping they will release an 8K version, which they have not yet (only 4K). 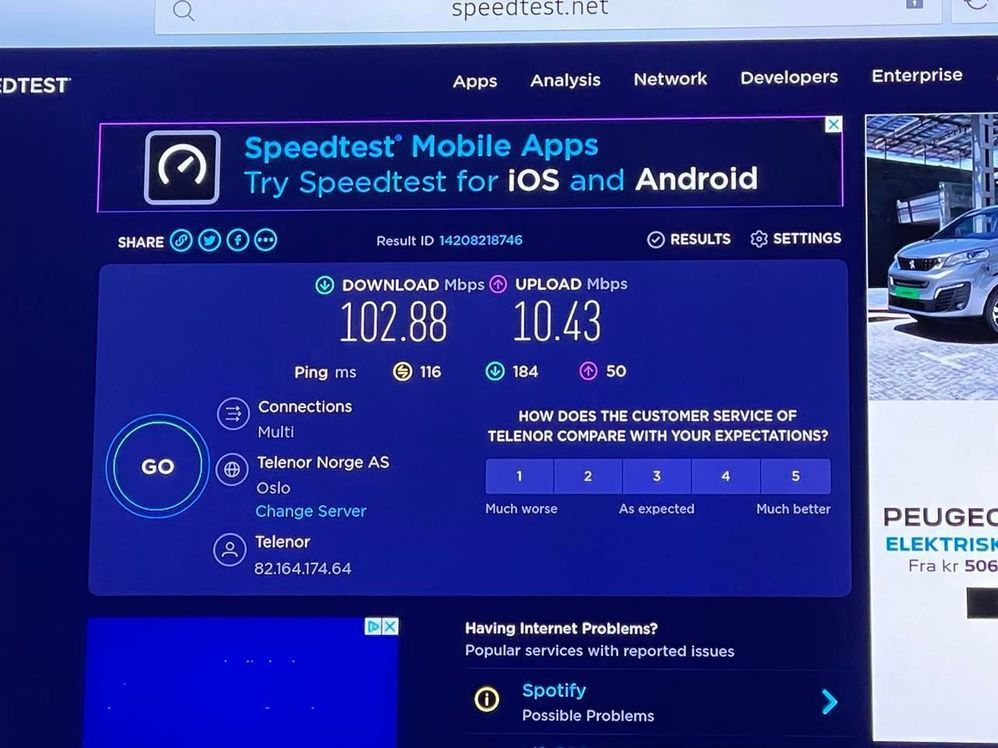