After nearly one month of waiting my fold 3 finally arrived today. I was playing with the phone like I normally do- a lit of drawing, gaming and browsing etc.. for a couple of hours and now I can see some indentations on the main screen.

I am hoping it's only on the screen protector and not the screen itself.  Anyone have the same issue?

The Fold³ has a plastic screen protector applied to it which can be marked for example by a finger nail.

Are you able to upload some screenshots ?

Normal usage with the fingertip shouldn't leave any permanent marks on it.

The specific Fold³ sPen that can be used on the inner large screen allows the nib to be pushed in much more easier than a Note sPen to help stop indentations.

Try using a soft micro fiber cloth to clean the screen to see how it is then.

The plastic screen protector can be carefully removed,  however that would let the phone's display then be unprotected.

Some prefer the look and feel of no screen protector at all which is a personal preference knowing the screen is then left unprotected.

A person has to be very very careful if removing the screen protector because if the phone's screen is damaged then Samsung wouldn't replace it free of charge.

Galaxy Z Fold | Z Flip
I've had my z fold 3 for under a month now and although I'm very good with my phones and are usually in pristine condition I've already noticed several indentations on my inner screen, and tbh I'm pretty disappointed considering this is my first folding phone and I haven't even been playing games. Its simply due to me closing the phone over. For a £1600 phone I'd have thought it would have been stronger, or even some sort of advice about closing the phone over, like don't even try to touch the screen!! 😂
0 Likes
Share
Reply

Are you able to take some photo's and upload the pictures into this thread to see this visually ?

Do you use the special sPen that's been released for the Fold³ ? i.e the one that comes in the free starter kit from Samsung.

That nib is designed to push in easier to help stop marks but I assume if the pen is used heavily this could cause indentations.

As per my first reply earlier I've only heard of the accidental press of a finger nail that could possibly cause this.

The operation of opening and closing the Fold³ shouldn't result in marks.

If you look at the YouTube reviews of the Fold³ from creator's who have been using the phone for a while their phone's don't appear to have marks from general usage i.e opening and closing it, and I can't recall any of them mentioning it.

The Fold³ has a plastic tpu factory fitted screen protector on it which can be replaced, however Samsung advise not to remove this yourself just incase the screen is damaged by doing this.

Just being extra careful is the key here.

But removing the screen protector leaves another dilemma !

The Fold³ screen is now unprotected.

Some owners have said they prefer the Fold³ without the protector as it feels better to the touch.

There are replacement screen protectors such as the Whitestone Dome Glass Screen Protector.

It's difficult to take a photo of the indentation marks but you can clear see them when the light hits at right angle. Since the indentations are quite deep I don't know if it was the actual screen that's been damaged rather than jus the screen protector.

It's my first folding phone as well and maybe it will be the last too. 😂

Galaxy Z Fold | Z Flip
I'll try and get some pics later when I'll have another phone to take them. Yeah, I'm hoping it's just the protector but that being said, it's still pretty poor as I know I've not physically put it under any real pressure at all. As for the fold pen, I've not really used it yet and now I'm scared to 😂 just doesn't fill me with confidence. I don't want to take the cover off as it is there for a reason and I like keeping my phones standard. I've got the Samsung plus care free for a year but I'm hesitant to use it so soon. What happens if further down the line I have another issue. It's really disappointing as I love the phone and although it's like you're smuggling a weapon in you're pocket, I've kinda got used to it 😂
1 Like
Share
Reply

It's unfortunate that you maybe past any relevant Cooling Off Period to have the phone swapped out.

In the UK a person has 28 days to try the phone out and be able to return it for any reason.

You could go to a Samsung Experience Store or Samsung Service Centre and ask them if they have the screen protectors in stock and ask them to replace it for you ?

Unless you've been very unfortunate @j123456789 my thoughts are it's the soft tpu screen protector that's marked up.

I only had my phone since yesterday and the marks were discovered after first two hours of using.  I managed to take a photo using iphone and you can see the right side of the screen is covered with marks. 😅 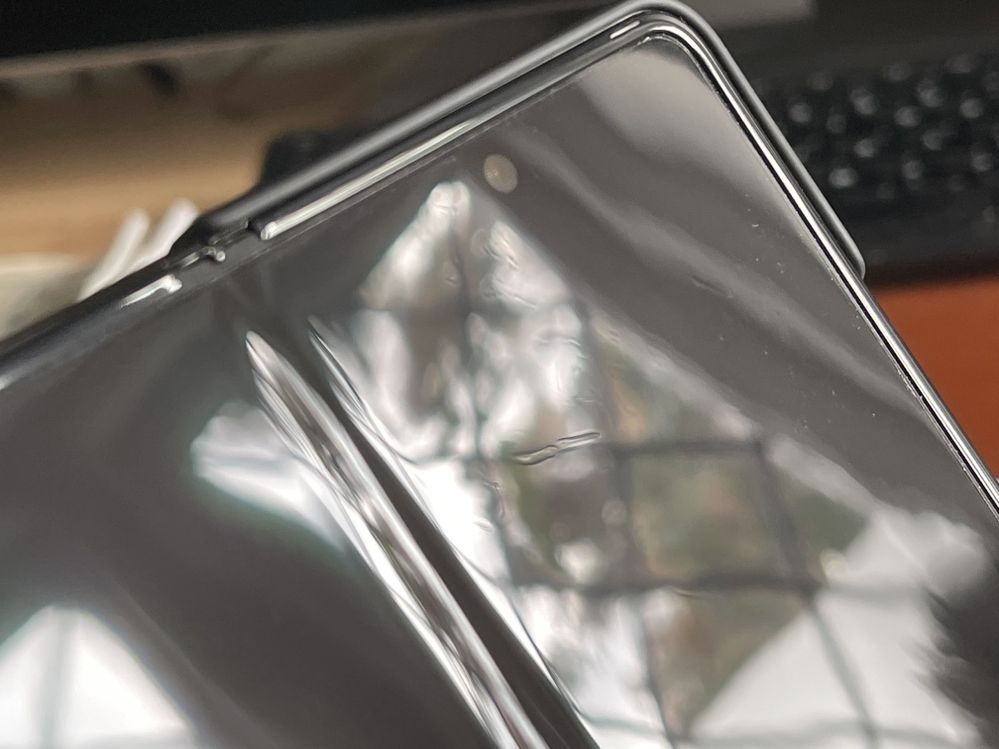