Hello, I have problem with 4K performance on Samsung 970 EVO Plus 1TB installed on Windows 10 Pro x64bit.

Most important speed 4K speeds are far below advertised speeds and shown in reviews.

I tried both Windows and Samsung NVMe 3.1 drives without change. 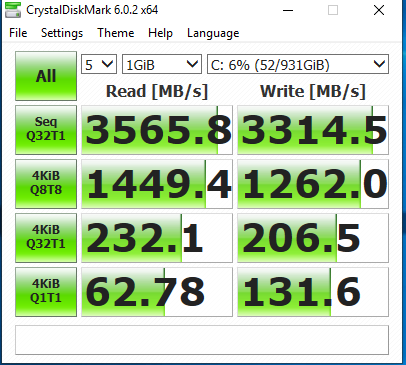 If you agree I would ask RMA?

Because only Read/Write is in specification in any software.

To avoid overheating I run one by one test and then temp is not above 80C.

But speeds are same.

I want to know can I remove label from top of my 970 EVO Plus, only top label?

But anyway S/N number inside in firmware match with S/N number on box and no reason Samsung to request to label stay. Off course bottom label with layer of copper help with heatdissipation but on top heatsink need to be directly in contact with memory and controller. Special controller because he is 20C hotter then memories.

I will remove top label only and install heatsink. If SSD die one day, but it's very small chance for that Samsung could match S/N Number of M.2 NVMe in Samsung Magician and Box of Drive. Like I sad small change that will something happen because Samsung SSDs are most reliable and I never had problems with speed with any other SSD I installed in mine or in other's computers. Only 970 EVO Plus speeds was little different then advertised and some people reach.

I bought an EVO 970 M.2 because I thought it is more fast then my 2 years older 950 PRO SATA. But when booted first time it took nearly double time to restart system

When I did benchmarks I knew why

OK the temperature of the M.2 is too high but when I see the benchmarks from others posted it is nearly same 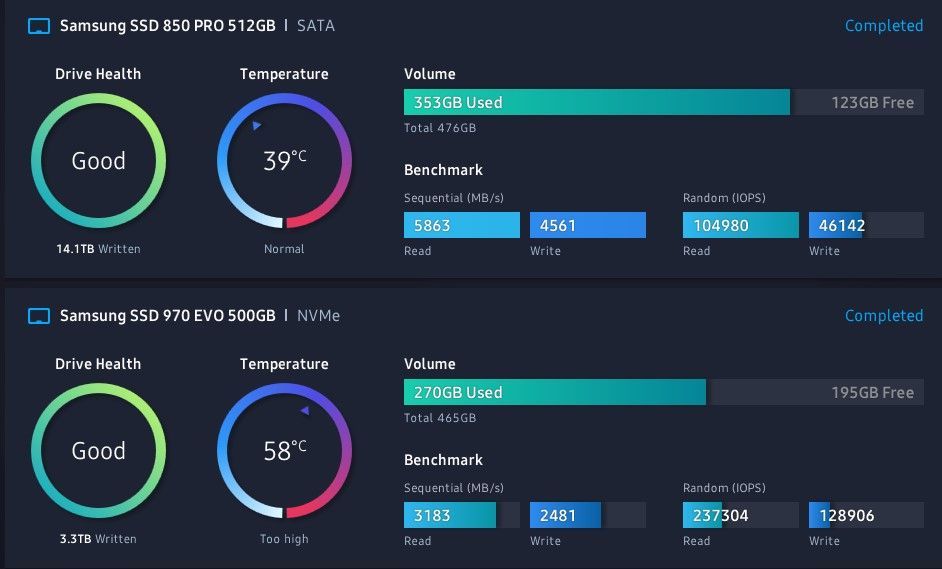 I have even bigger slow down after ***** Firmware Update for Samsung 970 EVO Plus.

iNSTANTLY, INSTANTLY when I change platform to DDR5 I will test mine Samsung 970 EVO PLUS 1TB.

If performance are below specifications more then 5% I will RMA, ask refund or replacement for another SSD as CORSAIR, WD or Crucial. I had several SSD or M2 Samsung and all of them worked normally in specifications except 970 EVO Plus. The difference between samples is insane and can't be connected to the OS or hardware.

With Samsung 970 EVO Plus we are faced with huge variation between samples and Firmware even make things worse.

I have had similar performance problems as detailed above with my 970 EvoPlus iTb drive but maybe for other reasons.
This is written for anyone looking for possible reasons that their super duper new Samsung 970 Evo or Evoplus NVME drive is not giving the results they expected.
It is written from experience and learning over about 5 days and tries to simplify the basic issues and attempt to help with them.

First up, I am not an IT expert of a 'super geek', simply a fairly old chap trying to get good system performance from his not too expensive system.
I own a 2 year old Dell Optiplex 3060 SFF with an i5 8500 processor and 16Gb of RAM. I was running a Samsung M.2 SSD in the single connection direct on the motherboard with a Samsung SATA 2.5 " SSD as main storage.

I had read that the single connection would take an NVME drive and when I saw one at a very low price (private sale, never opened) I bought it.
After exchanging the NVME for the M.2 Samsung on the motherboard I ran some speed tests using CrystalMark and was only getting about 1750 Mbps read and write, much lower than expected.
I also tried to run the Samsung Magician software (their OEM SSD management software) which recognises the SATA storage drive but not the NVME.

So I started the search for WHY and HOW to make it work.

To provide key information I searched the internet and found several fixes which included several articles about modifying the Registry - a bit too risky for me:

1 - Convert the Hard Drive handling in the BIOS to AHCI rather than the default RAID that was on my machine.
Various warnings about Windows not starting if the change was made in BIOS but I found this article which worked perfectly:
https://triplescomputers.com/blog/uncategorized/solution-switch-windows-10-from-raidide-to-ahci-oper...

2 - Install the SAMSUNG NVME driver which supersedes the Windows Driver (as far as I understand) - https://www.samsung.com/uk/support/model/MZ-V7S1T0BW/

I did both the above and now the Samsung Magician software would 'see' the NVME drive but the performance was not noticeably different running the Performance Benchmark. Another search!!

Suddenly find that the single motherboard connection for the M.2 SSD does support NVME but it does not have the capability to take advantage of the full NVME performance.
I checked the Samsung Magician and for the NVME drive it showed that the interface connection was PCIe Gen 2 x 4 lanes in the Drive Details. Apparently it needs Gen 3 or better.

Searched for a solution and found that a secondary PCIe express card / converter plugged into the PCIe express slot on the motherboard. Not a lot of cash (£13 / $15 in the UK) so I bought one.
Swapped the NVME drive into the PCIe converter and restarted the system.
Checked with Samsung Magician and the drive is now PCIe Gen 3 x 4 lanes. I ran another Performance Benchmark and am now seeing 3500 Mbps read and 3175 write - SUCCESS as far as I am prepared to go!!

So, before you spend money on a super duper NVME drive just be sure that any 'extras' required don't need a big secondary investment. Hope this helps someone!!

If the above figures are not good enough for you then you are beyond my level of being able to help. 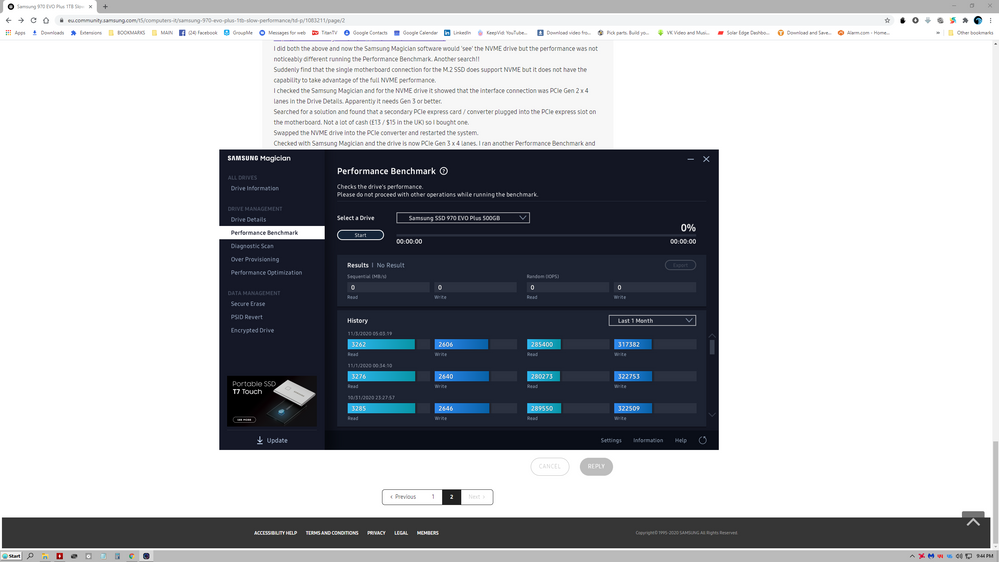 I've tried everything, but the conclusion is that THIS DISK IS SLOW. Really, there's nothing else to say about this drive.

I'm disappointed and will look for another brand next time.

I never complained about the brand and performance of Samsung 970 EVO Plus 1TB as a drive.

I was not satisfied with the performance of my sample.

But I fixed performance and only in 4K is 5% slower in some software than on the same M.2 drives but on a much newer platform. My X99 date from September 2014. First official support of full speed Gen 3.0 M.2 drives. I think NVMe was not even available at the time. The result is maybe because of faster RAM, Single and Multi-Threaded performance on much newer computers... Reviews of 970 EVO Plus are worked on PC platforms newer than 2017-2018.

People change platform to fast, without a real need for the performance difference. I didn't want to upgrade the second-time platform with DDR4. Gamers spent money only on computers, ignore other things. I can't like that...

I used to wear nice branded clothes, Italian brands and that cost. I found space between DDR4 and DDR5 to upgrade cloth because I didn't buy anything for years.

Because of that, I spent around 3500 euros on cloth for a little more than a year and best of all is because I saved more than 2500 euros. Everything on discounts in the official store. If you search carefully you can find exactly what you want for 30-40% even some things at a 60% discount. NAPAPIJRI Skidoo 2 Anorak cost 510 last euro winter I paid 200 euro only 2 samples were available in store.

Mostly I bought DIESEL and REPLAY. few Jeans, tracksuit, some sweatshirts, a few t-shirts with long and short sleeves, NAPAPIJRI I bought a Skidoo winter jacket and a rain jacket. I bought and some Parajumpers superlight autumn jacket with down and hood then 300gr weight, STONE ISLAND light jacket and some sweatshirts. Now I need to buy only boots from DIESEL best I saw ever, that's something between sneakers, boots and shoes... It called Hybrid boots from Leather and Cordura fiber, H-SHIROKI DBB-X.

I need to upgrade boxers/trunk, and basic T-Shirts with the short and Long sleeve I will find that from DIESEL I hope my favorite jeans brand. After that, I will have completely new upgraded cloth and wait for DDR5 and PCI-E 5.0 for a real upgrade.

really so sad to hear that 😥 anyway please support my articles on cara cek guys. hehee

u can find me at wigatos.com
0 Likes
Share
Reply