The relevant build is:

The problem also appears to be discussed at:

where it seems to affect the T713 too.

The problem started almost immediately after my firmware was updated on 3 April 2019.

I have investigated for several weeks now, I have done endless system cache wipes, uninstalled Apps (of which I have few anyway) and even resorted to a factory reset. Switching off auto App update is also irrelevant.

None of this solved the problem. The rapid battery drain is fixed for a random short time (minutes to >24hrs) after the cache wipe, but always returns within about a day's usage.

I have location/GPS and bluetooth OFF and Wi-Fi "Always ON", as before the update. I have been through all the settings checking that relevant things are OFF where necessary. Before, the overnight battery drain would be 2-3% at most, now it is >15%.

This is totally unacceptable and ridiculous, it's nearly as bad as having the screen on permanently, and especially and for such a high end tablet as this !!!

Switching off Wi-Fi, either directly or flight mode (same thing for me) stops the drain. Setting Wi-Fi to "off whilst idle" also mostly solves the problem, but this totally defeats the purpose of notifications, so is not acceptable, especially when it worked fine before. Something has changed... for the worse.

Looking at the process battery consumption, it's the Android OS, Android System & Device idle components suddenly consuming power. It seems they are triggered by some unknown event into doing some pointless activity, but related to the Wi-Fi state.

The "before" and "after" screenshots below illustrate the problem perfectly. The steep slope of the graph is screen ON and the flat parts are idle time, including one overnight period. I left the device at 23:29 in a good state (nice stepped graph on left), but the next morning at 09:28 it has burnt 17% battery (long steady slope on right graph). Wi-Fi battery usage is also up a small amount. The (lack of) active usage is indicated by the identical screen %. 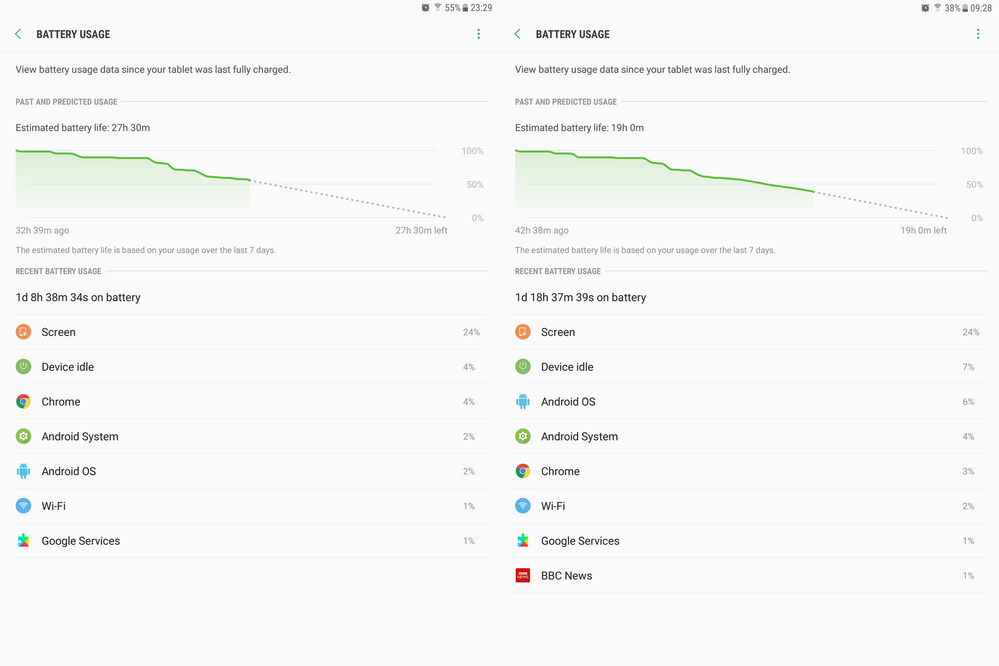 BTW, do not blame the BBC News App. After the factory reset I ran with no additional Apps installed to check out this factor (rogue Apps) - Problem still occurs.

This is software build bug, not a general problem with Android 7.0.

I cannot investigate further as I have downgraded to the previous (and properly working) build (T813XXS2BRI1 from Sep/Oct 2018). The firmware upgrade notification nag is vastly preferable to the battery draining.

New builds come out at irregular intervals, so I'm hoping sooner rather than later as this is quite serious.

Please can some moderator report this to the Samsung developers for urgent attention. Thank you.

Otherwise, I like the device and the new build looked good (when not draining the battery!).

Looking forward to the next build and fix for this problem...

Have you found any solution?

Thanks for your support. The more people who post the problem, the more likely Samsung pay attention and fix it (if they aren't already aware and working on it).

Unfortunately, the only satisfactory solution for me was a firmware downgrade (and I fancied the challenge too).

If you are happy to have Wi-Fi OFF when the tablet is idle, I found setting Wi-Fi "off whilst idle" pretty much stopped the drain as the problem seems linked to an active Wi-Fi connection. This might be OK for you until the next upgrade (with fix?) arrives in X months.

The downside as far as I understand is that you get no notifications until you switch on the screen and thus activate Wi-Fi. How can you get data if the radio is off??? So you have to actively check for messages rather than hear a notification, which defeats the purpose, IMHO.

To do this, go into Settings/Connections/Wi-Fi, tap "Advanced" (top right) and select "Never" or "While charging" for "Keep Wi-Fi on during sleep".

This is really only a temporary workaround, it's not how it should and did work, but it may be a "solution" for others.

I also just noticed that the battery usage numbers do not add up:

A quick check on my downgraded tablet shows a good match between consumed and total reported usage. Is this another "feature" of the problem? Perhaps I should have tried a 3rd party battery usage App, assuming they would be any better...?

If you fancy a firmware downgrade, I can tell you what I did, it depends how "techie" you are/feel. It went smoothly for me. I'm an IT guy, but backend servers and networking, nothing to do with Android and writing Apps! I did my research first, I didn't want to brick my tablet!

Note that it effectively causes a factory reset, i.e. a total data wipe but you get the desired firmware level. The term "factory reset" is misleading anyway, it does not go back to the firmware level at delivery. It stays the same but resets everything else back to zero and you have to go through the set up procedure, but backing up properly speeds this up.

Hope that helps. Get back if you want more on the downgrade... at your own risk, of course...

This Galaxy Tab S2 model SM-T813 will be my last ever Samsung purchase. Samsung doesn't even bother to reply to problems posted on this forum, much less try to resolve any problems, however serious, with their products.

Sony made my shіt list in 1981 and I never bought a Sony product since. Samsungs is the third company to make this list.

I had a similar problem with my TAB S2 T713 where Bluetooth would cause the battery to drain rapidly after the Nougat update.   A couple of days ago I found I could work around this by entering Flight Mode and then re-enabling Bluetooth and WiFi.   After doing this the battery drain seems back to normal.

I have no idea why you should be able to keep Flight Mode turned on whilst using the radio systems - but it seems to work!

Thanks. That's an interesting workaround, I'd like to have tested it, but I already downgraded my firmware.

IMHO, it still indicates an underlying bug in the SW, as that's weird behaviour  :-)

Activating flight mode should switch off all active radio systems (cell, Wi-Fi, Bluetooth as required), and then restore them to the previous state when disabled. From a SW design view, any re-enabling the individual radio systems should (IMHO) disable flight mode, otherwise there is an inconsistent view given to the user and more importantly the symbol that says "flight mode enabled" (ie. safe for flying) is now incorrect and "lying to you". That's poor design. It seems to be a general Android feature though (I have Andorid 5 on a Nexus device to test).

Happy that you found this cheaper (than mine) workaround until Samsung fix the bug.

I have exactly the same problem.

When is Samsung going to solve the issue with this otherwise fine tablet ?

Hope to hear from Samsung soon.

Thanks for your support. Another "bump" on the post will (hopefully) gather some official (moderator/developer) attention.

I also contacted my local support, referencing this post (aka bug report). They said, after asking twice and pointing out they still sold this HW therefore some SW updates are to be expected:

"Since the Samsung Community is on our website, I assume that the responsible persons know about possible problems.

Furthermore, the Tab S2 is from 2015, so there is no software update, because we only release security updates for these products. An Android update is not expected."

Not so reassuring, but a reasonable probability.

I don't actually expect a newer Android, version 7 works well enough. But, for currently sold devices, I do expect security updates, bug fixes and things not to get worse.

Anyway, updates come out anything from 1 to 5 months apart. As there is a serious outstanding BUG (IMHO), I hope it's sooner rather than later.

As an unofficial (non-Samsung) reference to the update frequency history you can go to:

and select your country/region for a full list with dates (sort as required).

Also waiting to hear from Samsung in the form of a new update  :-)

ezzzzz53
New Member
have the same problem so annoying, i left for work at 25% came home and tablet dead. i used to get 6 hours screen time, lucky to get 2 now.
1 Like
Reply

I am happy that I found this post as I am in the exact same situation, having the exact same model and version. I hardly use my tablet anymore, 1st it's honestly not super fast (was not from the very beginning when I bought it 2 yrs ago), 2nd it's always out of battery for the exact same reason you posted.

Can't contribute more as I lost already enough time. Perhaps I will become also one of those customers who switches to a different manufacturer later.