S9 Dead zones on the screen

has anyone else had this issue? On the lower part of my screen, there is an area that is unresponsive, I cant open any apps that sit in that area. When I text there are letters I cant use. If you swipe up on facebook it won't swipe.

I went to the S9 from the iPhone which I had for years but the s9 won me over.

I have had the s9 for 3 weeks. Its kept in a case and is unmarked as I always take care of my phones.

I called tech support who ran a series of tests and said it is hardware related and I must call Samsung shop to arrange a replacement. I have sent the phone back yesterday and I'm using a £25 phone I bought from Asda to keep me going.

Has anyone else had this issue, there are a few reports if you google dead zones.

I've got the same issue, but in a very specific location on the screen

I've managed to workaround it so far, but its far from ideal as it was working perfectly for 6 weeks previously

Messaged Samsung who just stated as I'm not in the US to contact my regional area for support, and claim they are not aware of any issues, even though a couple of tech websites DO state Samsung are aware of "a small number of customers" having issues and toc ontact Samsung directly. This ONLY applies if you are in the US as its a US phone number to contact. No good if you are based in UK and the response I got was again to contact my regional area my help

Then Samsung is not being honest.

I had my phone for just under 3 months, I sent the phone back and I had a new one. The new one is fine.

Apparently, the early S9s suffered from this problem.

Samsung said if I had gone over 3 months then they would have repaired it under warranty.

I dealt with the Samsung shop UK, they have a support option.

2 weeks of use started to make error.

get it returned for a new one

Galaxy S9 Series
My phone is uae zone. If is in warrantly just in uae.
Im in europe I bought it here. The will not replace it without extra payment.
0 Likes
Share
Reply

I did a 2nd full factory reset before taking it to local T-Mobile shop, where they suggested as its outside the 30-day return warrenty it would have to go off for eapir/replacement which could take up to 4 weeks and also said I would need to use a credit card to give them a £75 deposit on a loan phone that would be returned when I bring the loan phone back. I didn't agree to either and argued its a new phone thats less than 2 months old, I do NOT want it sending off for "repair" neither am I willing to give any deposits for loan phones

They also suggested taking it to the nearest Samsung service centre (2hich is 20 miles away) who can test it there and also replace if they verify its a hardware fault, which it likely as its just not worth teh aggrevation to them and simply RMA for me

So, thats what I'm doing next week

The more poeple ring Samsung and get them to log it, the more chanbce of Samsun admitting there is an hardware fault with the csreen digitizers 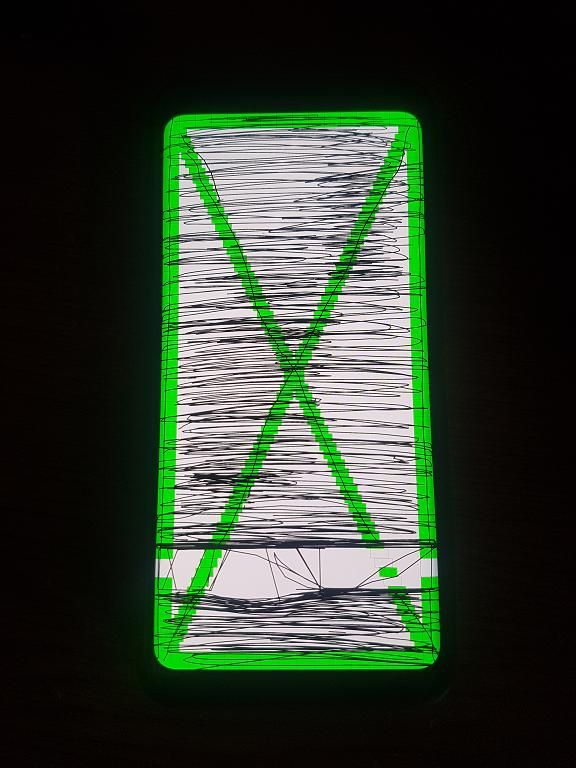 This is my actual screen taken this morning using another phones camera. As you can see, its pretty obvious where my problem is. Nothing fixes this via software, so I'm taking it to the Manchester Samsung centre which is a 50 miles round trip for me to get it sorted out. Hopefully replaced under warrenty as its cleraly faulty

T-Mobile offered to send it iff to be 'repaired' but could take upto 4 weeks. Not acceptable really

Got my phone back yesterday from shop

Fully repaired. Never said anything about KNOX being tripped or showing as 'rooted' in fault report from repair centre or from shop when I picked it up

Still KNOX tripped so motherboard hadn't been changed. Now rooted again with Magisk. Working as it should be when new. I tested screen before I left shop as well to makle sure that had been replaced

It is the same phone, I took serial number and IMEI before I sent it off, plus they took photos when it arrived at repair centre

Galaxy S9 Series
i tried everything i seen so far when looking it up., all of of it says solutions i cant even use because my whole screen is a dead zone
0 Likes
Share
Reply

I just got off the phone with Samsung because 3 days ago I started with this same issue... it's so annoying.
They said there was no known issue and suggested going into a service center to have a look at it.

Galaxy S9 Series
my whole screen is unresponsive, just got the phone a couple weeks ago
0 Likes
Share
Reply