Samsung galaxy s10 plus not detected on Android file transfer

I tried everything I could find in internet and nothing works.

Can anybody help me how can I transfer photos to my macbook throuch usb cable.

In my case it's a matter of persistence on checking the pop up on my phone that I've allowed the connection and closing down Android Transfer on the Mac and relaunching a few times before it takes.

I have installed differen software for samsung on Macbook Air and finally it is working.

Now I can see my phone on laptop screen.

What software did you install on your Mac please, as I have the same problem.

Thanks Joanna 64. I also found another solution suggested which was to plug in/unplug/plug in quickly. That worked for Android file transfer.

Galaxy S10 Series
I have tried and did not worked for me.
I actually regret buying Macbook Air as always problems, it looks they just do not want you to have iphones not any other devices.
0 Likes
Share
Reply

I have a new S20 plus and want to transfer music from my iMac to the S20 Plus. Previously, I had a Oneplus 6 which worked perfectly with my iMac using Android File Transfer.

I have tried every single suggestion, to get Android File Transfer to connect my iMac and S20 plus.

I have now discovered a possible way around it: Samsung Smart Switch. Please see the attched photos.

I have no idea why Android File Transfer with not work with my new S20 Plus and iMac? But, the Samsung Smart switch appears to work. The music folder can be seen second from the top in photo 3. Any questions, please just ask. 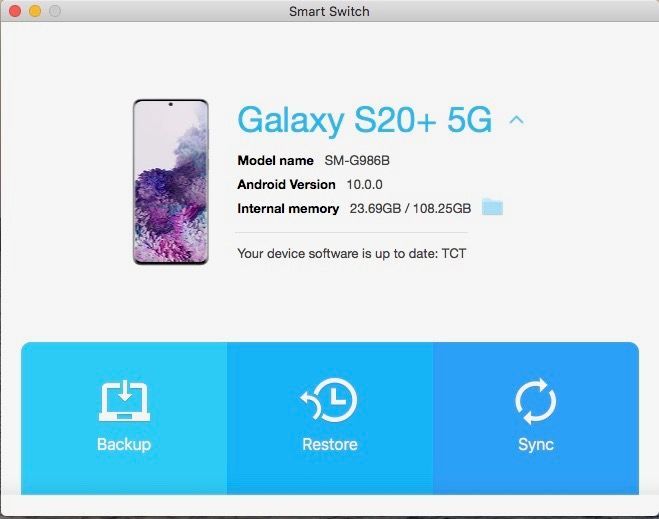 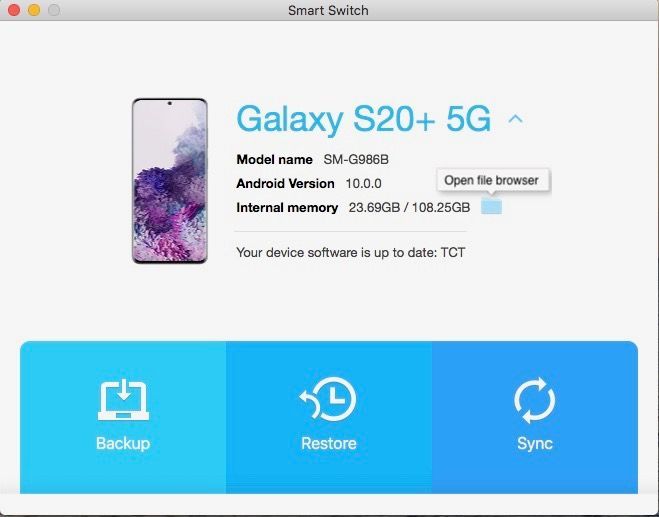 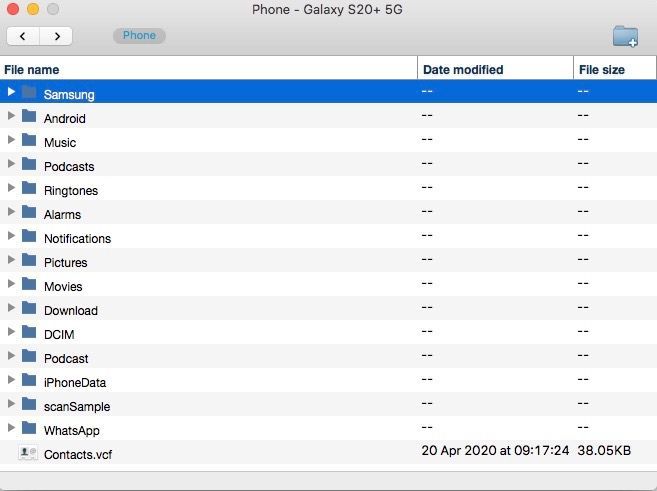 Brilliant solution...at last!
Android File Transfer used to work for me with my iMac and Galaxy S9+ but my phone stopped being recognised as described in abundance here and elsewhere and I gave up searching unsuccessfully for a solution.

I thought Samsung Smart Switch was just for transferring files and settings to a new Samsung phone from an old one. The folder option, revealed when you click the down arrow by the device name, opens up the phone's file structure just like Android File Transfer used to. It also supports restoring backups from iTunes...like music. It said playlists would be restored, too, but for me that didn't work. Should it?

My Galaxy Note 2, when USB connected to the Mac, automatically opened Photos and downloaded everything with no help from me.

In SmartSwitch, phone is only acknowledged when "Transferring Files/Android Auto" is selected as the Default USB config. I can get to the DCIM > Camera folder as described above, but I am lucky if one image completes the transfer. An mp4 would not go, and some images abort part way through.

In Image Capture I have set "autoimporter" and "Photos" as the destination, and when "Transferring Images" is selected in Default USB config., some but not allies appear in the Image Capture pane. Just now, 21 were imported, only one shows the actual image in the icon, the rest are the default JPEG icon. However selecting any one produces the message :-

Each time I try the process, a different number of files appear in the Image Capture pane, and in the corresponding import pane under the phon'e name in Photos, but cannot be opened.

Quite irritating. As far as I can see, at the moment I am restricted by my lack of tech-savvy, to carrying the old phone around for use as a camera, or transferring the photos taken on the s10+ back to the old phone, from which I can easily import to Photos.

Bearing in mind a major reason for acquiring the s10+ was the highly rated cameras, I think I'm justified in feeling rather irritated/frustrated!