Strangely, Google maps is always working correctly. This is/was confusing to me because I thought there was only one compass. After a lot of reading I figured out that maps needs a different calibration movement than the Samsung compass which is used by other navigation apps.

So, long story short: Even though Google maps compass is calibrated, the compass in other navigation apps is not. Even when I do calibrate it, this calibration doesn't seem to be persisted.

I tried clearing cache of the apps and phone to no avail. Is it possible this problem arose during the last firmware update? What's going on? Any ideas?

I can confirm the same issue is on my S10, probably after an update. Worked fine for months. On most apps it cannot be fixed, because there is no compass calibration option.

In the App Locus Map it's possible to enable a "compatibility mode" that helps as a workaround.

In the App Komoot I didn't find any option for an workaround.

99% an issue with an Samsung firmware update, because all compass related apps are affacted at the same time.

Thanks for your reply. I tried the compatability mode in Locus, which works a bit better because at least the compass is pointing in the right direction but the compass also becomes very nervous/jittery. Are you experiencing the same thing?

About your conclusion: I think the problems started with the Pie update, so I think it's a firmware problem too.

To be honoust I haven't contacted support. For some reason I have the feeling it wouldn't make any difference. Usually when I contact support (of any company) I only get the obvious standard solutions which I already tried. That made me become somewhat cynical.

Maybe I should give it a go though.

Well I have the same on my S10+. It is almost 180 degrees off. Aparently it is not an issue for Samsung for these very expensive phones, because the problem is here for more than 4 months now. 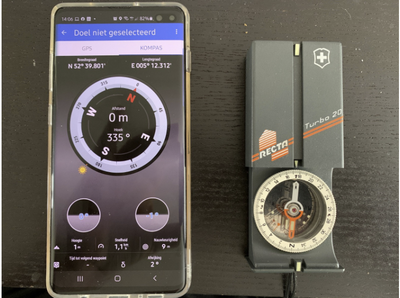 @Ericie Sorry to hear you have problems too... I never found a fix for this problem (except for constantly recalibrating - which is really no solution) and I don't believe Samsung will fix it either. There's only one thing I've never tried : a full factory reset of the phone. The amount of time it will cost to install everything again is just off putting.

Did your phone have this problem out of the box (which os version?) or did arise after an update?

I am not sure. It did receive several update, so I don't know if it is an issue out of the box.
I did  contact Samsung support, so waiting now for an answer.

I wrote them several months ago about my S10, too. I gave up when they said I should factory reset my tablet. Double fail.

For now I calibrate in google maps outside each time I am using the compass actively.