Galaxy S10 Series
Hi,
Hopefully someone can help!
Following the latest Android 11 update I've noticed that a large number of photos stored in the main picture gallery app have been rearranged and stored using an incorrect date.
I moved from an iPhone to my Samsung 10 in July 2019 and transferred a host of photos going back to 2015. These were all stored chronologically in their correct order by date. No issues.
But since the update, many of these older photos are now grouped into the month of July 2019. Seems an odd coincidence that it's when the photos were moved across phones using Samsung's Smartswitch.
Taking one photo as an example: the filename is 20170926_223302_IMG_0906.JPG, as it was taken 26th September 2017. However the new assigned taken date is 13th July 2019!
There's no apparent option to manually edit the "taken on" dates or sort function.
It may seem trivial but it makes it difficult locating several years worth of photos which are bundled into one date and in no order.
Many thanks!
4 Likes
Share
Reply
17 REPLIES 17 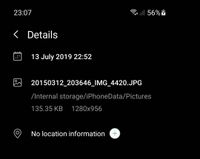 Hi I just realized this happened to me too. I thought I did something and said well I have to live with it.  Tks.

Galaxy S10 Series
Annoying isn't it? I spoke to someone on live chat and they just said do a factory reset, which isn't the best solution really so I've just had to accept it
0 Likes
Share
Reply

I don't think factory reset will work...once theirs a software update its Permanent!!

OMG, not the only one. Look at this post I wrote on Reddit about this problem: https://www.reddit.com/r/samsunggalaxy/comments/me8qo8/problem_with_gallery_app_and_photo_creation_d...

One user gave me this tip: " Open Gallery > Tap Menu bottom right 3 lines > Settings > About Gallery > Tap on the "Version number" a few times until Labs is enabled. Back to Settings > scroll to bottom for Labs > Scroll to bottom for Data/time fix", but photos without metadata cannot be automatically fixed (like the photos they send me via WhatsApp)

It seems to happen with pictures without metadata... but in previous Android, when you move files around it didn't change the "date" (which is the Creation date).

This same issue happens when you edit photos in some apps other than Samsung Gallery.  For example if you take a new photo then edit it in Google Photos app, the date EXIF info gets removed.  The phone and Samsung Gallery then show the photos as taken in 1970 so they appear right at the bottom of the gallery.

Samsung will just say it's an issue with the Google Photos app (or other 3rd party app).  But it only started happening after Android 11/OneUI 3.0 so I don't buy that excuse.

I found this app that can help fix this issue, until Samsung solves it. https://play.google.com/store/apps/details?id=com.panaustik.syncimagetime&hl=en&gl=US

You have to pay for using, but it is a good app!

Same with my Galaxy Note 10+

Yes I did that a few days ago and still have the issue...