The main issue is that when Samsung Health send my data to Strava, the global running time isn't correct anymore.

My last run of today : Samsung Health 30min40 and Strava says 25min44. Any idea why there is a difference in the time ?

For me clearly Samsung Health is right and data get wrong when going to Strava.

Thanks in advance for your support

It is obvious to me that nobody cares.

If I were not locked into Android at work, I would switch back to iPhone and apple watch.

Samsung does not care about sport tracking otherwise they would have already offered many options to integrate with other apps like Runtastic, runkeeper, Strava, Endomondo just like apple. They would also have delivered a proper data analysis portal which they did not.

Strava does not care about tizen OS. To be honest nobody cares.

For now, I just accept hat my data is lost because it is stuck in samsung'ss ervers.


I dont beleive Samsung is fully to blame here. I understand they may not be using the industry standard file format but the actual data they are generating is not incorrect. Strava just isnt able to read the samsung data correctly in its auto upload. I have found if you manually import your samsung data files then the information is correct.

To do this export your GPX file from within samsung health and then upload this to strava. You must login to strava on their website (not the app) to import this file.

Again, it is not a good fix because it means you have to manaully do this everytime but it does mean your data matches.

In summary, Samsung doesnt use the standard file format (so some blame for them here) and Strava hasnt built their app to accomodate the Samsung file format adequately (so blame for Strava here too).

If you look at the XML schema definition for TCX files on Garmin's web site, then according to the strict XML rules, it is not mandatory to include every element/data point in each Trackpoint tag...

The minoccurs means each element is optional. So technically, yes, Samsung's file DOES follow the standard. And we are back to the point about whether Strava should therefore interpolate between the trackpoints that contain GPS coordinates for working out the speed etc, and ignore those that are missing this data.

When I originally contacted Samsung Help via the app about this, one of the things they (eventually) suggested was to switch on the High Accurary GPS setting - which I did. So my watch is, as far as I can tell, recording as many GPS points as it can on my activities. As some people have said you CAN export just the GPS file from Samsung Health and import that, but that dos not include the Heart Rate etc data. But because it, by defintion, has GPS data on every data point, it will not contain any "static" data points.
I'm still going to blame Samung overall for this though. It seems a LOT of us have already raised this with them, one way or another. And the simple fix is to update their software so that the TCX file it sends contains GPS data at every trackpoint. This would resolve the issue. But they are not doing this.

If something doesn't happen by the time the iPhone 12 comes out, I'm going to be selling my Samsung phone and watch and giving the Apple gear a try for a while.
0 Likes
Reply
Highlighted

Patrick_
Apprentice
In response to YannO

The situation remains the same: this is very much an effort needed at the Strava side of things, so there's nothing more we can do for you guys beyond what we already have and are doing, sadly.

Hoping that a fix comes for you all soon though. :)"

I will contact strava again , what do you guys think ?
0 Likes
Reply
Highlighted

@MirceaForce wrote:
this is the message received form moderator Ants from samsung

The situation remains the same: this is very much an effort needed at the Strava side of things, so there's nothing more we can do for you guys beyond what we already have and are doing, sadly.

Hoping that a fix comes for you all soon though. :)"

I will contact strava again , what do you guys think ?

We are going around in circles... Samsung COULD do something about it. And Strava will just bat it back and say it's Samsung's issue.

But please do raise it again with Strava, and let us know here what they say. Thanks for trying.

noise36
Apprentice
In response to MirceaForce

So why doesnt Samsung engage with Strava at a senior level and get it resolved? They just dont care enough.

They make some great hardware but have a track record of not supporting that would good software support.

I will not give up ..until this issue is fixed..please all do the same contract strava & samsung more tickets a chance to get it done ...they must fix this issue

MirceaForce
Navigator
In response to noise36
please contact strava and samsung and don't give up..it's our interes to fix this...
0 Likes
Reply
Highlighted 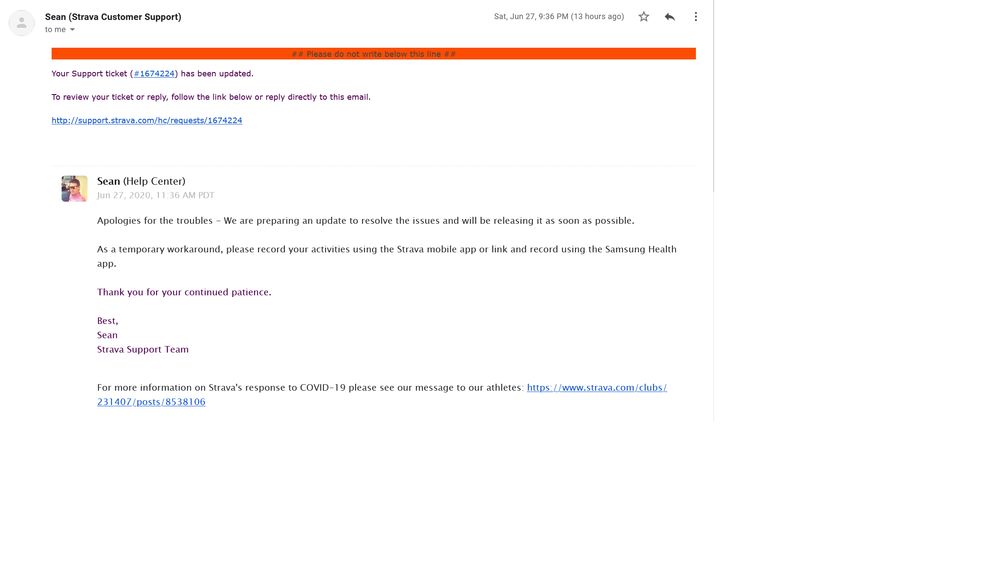 maybe it will be fixed..as strava support says

Great news at face value from Sean at Strava, so well done

But is he clear what the problem is based on his reply ?

He appears suggests in his message as a temporary workaround  to use the link and record using the Samsung Health App and upload to Strava. The whole point of this thread is that this does not work. Are you sure Sean understands what the problem is and that their pending update is actually focused on resolving the issue we have been discussing in this thread ?