That is exactly what proves it is software and not anythign else.

Def software.  Someone else mentioned new release of a watch.  Thsi is def Samsung killing their old tech on purpose.

Apple was sued for this, its now up to us customers to threaten Samsung with a suit in order to undo this.

They will come back with 25% off a new device.

We must band together and push for a software fix to this.

This is bad business.

If Samsung is stubborn, they will lose customers - here is one.

Absolutely, True!!! Day after day, I am more inclined towards technology that works reliably and the company that keeps things working. Samsung, it not interested in solving our day to day to issues.

I just wanted to chime in and mention that I'm having the exact same issue. Just ridiculous battery drain starting a few days ago. I've had this watch for months and the battery life has been fantastic until just now.

Having the same issue, I have had mine since the first week of release and the battery drain started a couple of days ago. Hopefully Samsung will address the issue soon!

I reset  my  watch and  factory reset my phone ~, cannot  find a way to UNINSTALL that update ~  still having and issue ~ also did Smart Tutor  with Samsung they  could not  find anything wrong ~~  hmmmm Explosion ~~  sounds like they  want us to buy the NEW  Galaxy at 400.00 ~~  lol  I"m really  ticked over this issue

Thanks for sending this information through, Celia. In that case, we'd recommend you get this inspected by one of our Engineers at a Service Centre. You can find the nearest Service Centre to you here: https://t.co/eswzQLwQeq. ^JO

"Are you seriously suggesting that this is a hardware issue? An actual physical problem with my watch? From what I can see from the last 2 days online,There are at least 100 people who are experiencing this issue, beginning 3 nights ago (16/10/18)
If this is a hardware issue then Samsung must have put a technological time bomb into watches to attempt to make customers replace their gear sports with reduced price galaxy watches.
If you are saying that's not the case,Then it isn't a hardware problem,It's a software problem, which Samsung need to resolve.
This night time battery drain issue is making my £300 watch unusable.
Thanks for nothing Samsung.
I'm off to get some advice from watchdog or Which"

And to be honest,if the issue was hardware, wouldn't the battery drain be consistent??

That is absolutely true!! These guys are suggesting a warranty claim??? It is decided this is the last time I would buying any samsung product!!

Probably it was me who you think is a Samsung worker... You're wrong

Never was, never will be

Based on this logic you're definitaly an Apple worker XDDDD Sorry just kidding.

By the way was not suggesting anything. Just somebody was asking if the Samsung Watch (yes the $400.00 one) has the same issue or not, because I was thinking about an exchange if that's working fine. But that's a personal thought.

I'm struggling the same way with the customer support like everybody else here (on 2 different channels at the moment, didn't try to call them yet, that will be the 3rd). I'm not defending Samsung, nor Apple, or Garmin or anybody else, but as an engineer working in a customer based environment (nope, nothing with even close to IT or phones or gadgets) I more or less know how a customer issue is influencing development / engineering and also how the things are working with customer support. Believe me if you have had a quick resolution for an issue like this by any company, 100% they already had the solution when you raised your ticket.

So please don't go for personal accusations about who's working for who...

PS.: Greetings from the refrigeration industry

Just an update, I closed one of the "support channels" as they were useless.... 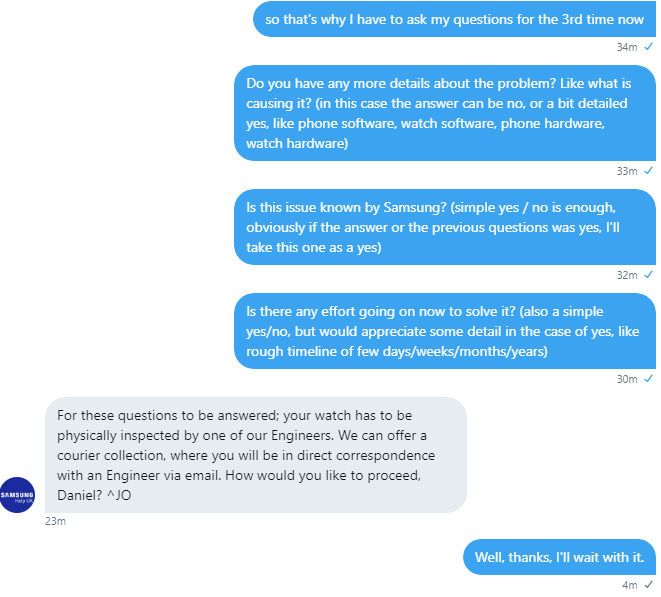