Just got a new 42mm Galaxy Watch and am concerned that steps are doubled if I go for a walk with phone in pocket. 'All steps' are selected in Samsung Health but there is no option to count just Galaxy watch steps. Does this mean my actual steps for the walk are being doubled?! Thanks for your response.

Has anybody tried my suggestion on the first page to confirm this is happening?  I find myself in an odd situation here as I cannot replicate the issue with my watch/phone.    I have a Galaxy watch and have used with Galaxy S7 for last 6 months without issue.  Currently using with S20 and, again, no issues. Steps do not double up when I walk with both the watch and phone and both count independently if I go for a walk with one and not the other.  Please feel free to query any of my settings and I'll report back.

I think the app is adjusting for differences is detects between the way the Active 2 detects steps and the way the phone detects steps.  First thing this morning I went for a walk starting with something like 123 steps tracked around the house already.  With the phone in my pocket and the Active 2 on my wrist I took a small walk.  When I got back I checked the steps in the Samsung Health app on the phone and it showed a total of 3745 "ALL STEPS".  When I selected just "MOBILE PHONE" it showed 3419 steps.  Without more info from the developer on exactly what is happening, I am satisfied that the "ALL STEPS" is accurate enough for me.  Anybody can do similar samples and decide for themselves what to do.

Also, if you open Samsung Health on your phone and tap on "Steps", then click on "All Steps" and then "Learn More", you will see the following at the bottom (from Samsung):

"If your phone and watch are connected, your total step count will be automatically calculated based on the steps recorded by both devices."

So basically they don't double-count, but use some sort of method for smoothing out the differences between the two devices.  As one prior poster mentioned, the data has time stamps on it, so Samsung likely has some sort of algorithm that boots duplicate data for steps that occur during the same period of time.

Thank you Grant837 for posting this because after trying many times to find the solution your answer worked for me. My steps weren't being doubled but when phone and watch synced it combined both which was too many because I wear my watch always so it has the correct step count. I have had other Samsung watches and SHealth gave choices between all steps, mobile or watch but for my Gear Sport those options aren't available??

Quick question - I see that the step data is automatically synced between the watch and phone, but how about if I select cycling on the watch and take the phone with me in pocket.

Will the phone then assume they are steps being taken while I cycle? My step count seems high but unsure...

Is this solved already? I just bought Galaxy Fit2  and I have (almost) duplicate step count in the Health App. And no, I don't want to turn off either of the step sources. It's ridiculous that user would need to choose the source manually. This should work as  brittonnick described.

The main reason that I ended up purchasing Fit2 is that I have Samsung phone and I thought I could go to jogging and have only Fit2 with me and other times I would have only my phone.

Should I have bought Honor Band 6 instead?

I recently bought a Galaxy Fit2. There are 3 ways to choose how your steps are counted by tapping Steps then scroll down and tap Mobile Phone, All Steps or Galaxy Fit2 in SHealth. So, depending on which device you are using that day, select it. I leave mine on Galaxy Fit2 always though in the past I have used my phone if my watch was dead (hasn't happened with this watch fantastic battery!). I would avoid All Steps because it is inaccurate and can double your steps.

When I cycle with phone in pocket (and watch at home) the Health App on the phone is saying I've done 1000s of steps.  I've even disabled auto-detect workout, but it still adds up steps, just doesn't store them in a workout.

I've just done the settings change that is suggested to get the phone to stop counting steps.  Will see if it works when I cycle tomorrow.

Did it worked? My phone track the steps even when I'm on motorcycle and I have my phone mounted on the support on the handlebar.

In theory, there is no double-counting, but I am a new Galaxy fit user and I see a slight difference between the watch and the phone. It's like the phone counts the steps better. 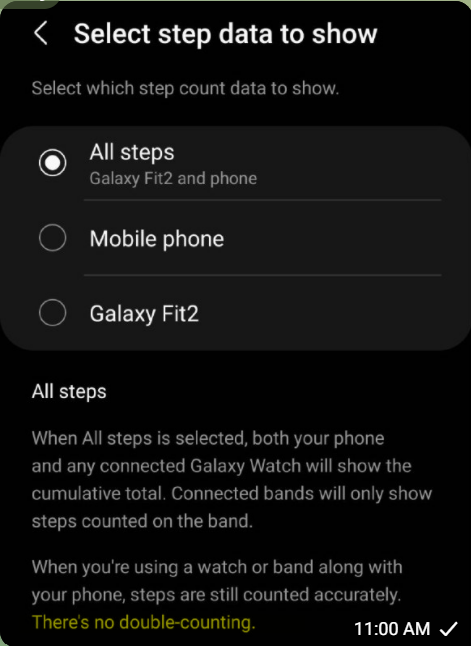