So I've had my 43tu7000 for about a month now, and I'm finding more and more of the HDR content on Netflix and Disney+ to be unwatchable.  Whenever there's a dark scene, I can barely make out anything which seems to completely go against the marketing blurb:

"Watch every moment burst from the screen. Discover what’s lurking in the shadows of a horror movie or witness the true beauty of a sun filled landscape scene."

I've tried messing about with all the settings, unfortunately there isn't an option to turn HDR off on this model.  I've tried using the built in apps, the same apps on a FireTV 4k, and an xbox one s.  At the moment the only way to watch a lot of the content is to fall back to my Sky Q Mini box which isn't 4k or HDR and kind of defeats the purpose of buying a 4k HDR TV!

Anyone else noticing issues, or can suggest how to tweak it to get good results? 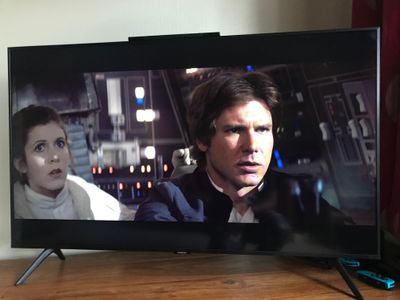 Upgraded to firmware 1302 and it’s certainly improved the 4K HDR picture from Disney+ (see above). Had to update via USB as it wasn’t available directly from the TV.

yeah... i tried it but it hasn't changed a thing 😞

I spent quite a bit of time finding the problem, I almost brought it back to the shop for a refund, but everything seems ok with this latest firmware.

It has to be done by USB because the update by internet obviously doesn't provide recent updates (problem with their servers probably).

For the rest, the Tizen system is really slow, but since it's open-source and comes from Samsung, I'm not surprised, especially since you can't remove pre-installed applications (unless you have a trick to do so), it's still a bit expensive for what TV offers.

Especially since the "Crystal UHD" is a cheap QLED, which is itself a cheap marketing version of the OLED.

Well after Airplay 2 is very appreciable as well as the bluetooth (on an equivalent Sony I couldn't find better), I didn't test the audio because as we all know the quality is necessarily *****ty and I have a Bose sound bar so I don't care, now let's hope it doesn't die right after the warranty.

Update popped up via the TV last night, downloaded and hey presto I can now see everything In HDR content.  I have to say it does seem to have gone maybe a bit too far the other way, as in now there's absolutely no shadow on the Disney+ content I tested and it looks very washed out, or maybe I'm just so used to the darkness of the previous firmware versions.

I have the same problem, came here and found no solutions, then I called my Salesperson and he just asked me to change shadow details to higher setting and it works!

Juancamilo212
Apprentice
In response to Adian1

where can i find it (shadow details)?