Two days ago one frame suddenly stopped working with the HDMI "Game Port".

The day after the other one experienced the same and now none of the TV's HDMI "Game Port" works with the Xbox. TV's just displays a "check input power source" message.

Connecting the XBOX to another HDMI-port works fine.

I checked the latest firmware @ Samsung support page and it says 1506 was made available last week, so my hypothesis is that it breaks "HDMI Game-port" functionality when using the xbox series x 4k/120hz.

I've played around with disabling VRR, HDR etc. on the xbox to no avail. Also had Samsung support remove into the TVs and first reset EDID(?) and then full factory reset.

Currently using another HDMI for the Xbox but would prefer to get it back into the GAME-port as this supposedly provides a better picture and VRR-support etc. 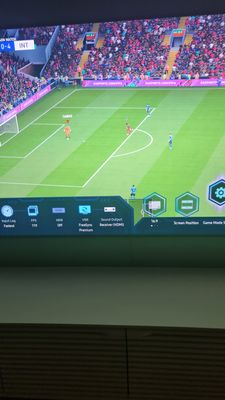 I believe you can set the xbox menu to output 60hz but have it bump to 120hz automatically when you open up a supported game. I struggled with my screen going black when starting games for a period of time, until realizing that the reason for the signal being lost was the 4k/120hz combination being activated when the game booted up.

I do however notice that you have VRR-active so I assume you are using the game port? Can you check your resolution and see if its 1080p or 4k? 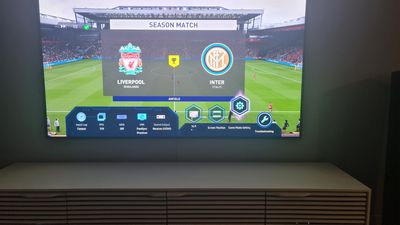 replying to calumH... now this is in game. And I've tested it over and over again. It reads 120fps. Also selected 4k VRR. I just prefer HDR off when gaming (it looks worse on fifa for me)

Not sure I understand that picture you've sent...it doesn't quite say 120fps for all ports? Maybe it's just me?

Interesting, is it actually 120fps though? i.e can you feel the difference to 60fps?

Cant say I notice a huge difference. Fifa is a smooth game always.

Just did a quick test on forza horizon 4, disabled vrr on the Xbox settings and filmed the screen at 240fps slow motion on my phone, the number of frames per second actually show when set to 120hz and 60hz are the same in game. Then played the game on my pc at 144hz and the difference is night and day.

this might just be my particular set up and setting etc... others may actually be getting true 4K 120 on hdmi 1 but definitely not me. Really not sure why the game bar is saying that it is showing 120hz for me

Based on manual, it should be 120Hz only on HDMI slot 4. Same goes for colors, cause HDMI 2.0 cant do either (bandwith limit).

There are basically two options, either all slots are in fact HDMI 2.1, just crippled somehow via firmware (only God and Samsung knows why) or TV just shows "input" FPS and not actual output aka you can send in whatever you want and Samsung will display whatever it wants too.

Meaning, it can accept 120Hz input, but it will output 60Hz. Unless you are used to play on real 120Hz, you wont tell difference. And this TV has super low input lag and very smooth 60Hz, so difference is pretty low compared to real 120Hz.

Just to wrap up all symptoms of what people are describing in this thread which are aligned with my issues too. Please correct me if it's different in your setup.

1. Having 4k and VRR turned on for the XBX makes the The Frame TV( with firmware version 1506)'s screen goes blank on the Game HDMI Port(HDMI 2.1).

2. Once it happens you have to use another HDMI ports to get the picture back but, there's issues where following features don't get activated that are only valid on Game HDMI Port (HDMI 2.1).

3. Some saying that we can get the Game HDMI port back working with hard reset but same issue will occur with VRR and 4k turned on for XBX which is no point of doing so.

Here's my question, can someone please confirm that issues I am describing here were not happening with earlier version of firmware? Just to get the idea if it's a hardware issue or a software issue.

BTW, I am based in UK

I cant vouch for HDMI 4 working as HDMI 2.1 before, but it could run regular input just fine in version before that (one I got The Frame with).

It did Input Plus correctly and at minimum worked as HDMI 2.0, which for me it does not with last (1506) version.

Enabling Input Plus (ver 1506) on HDMI 4 slot ends with black screen and I need to plug into different slot. Without Input Plus it runs at HDMI 1.4 limit (thats 4k30Hz and nothing else).