I have a smart led tv Model No is UE48H6400, we have noticed this morning that there is a purple patch on the bottom right hand side. The tv is out of warranty, but I wondered if anyone else had the same problem and if they fixed it? We have run the tests and it shows up in all 3. Thanks

I've been looking on ebay for 3D TVs... What a surprise; there are quite a number of Samsungs on there with purple, blue or "dark" patches.

What a joke Samsung are! This is so clearly a common defect with their products.

Yes it seems to be,  but Samsung will not admit that because if they do admit it is a known fault with the TV,  it would mean you can prove that the fault was there when you purchased the TV. Under the October 2015 Consumer Law if you can show the fault was there from new you can still ask for repair or replacement even if the set is older than 12 months and not more than 6 years.

There is a link to the Which tool which you can  see if you have a claim on ks owners refund more info thread on these forums. Would also help if you document others with the same issues.

Dublin
Apprentice
In response to paul1277

I’ve ran out of patience at this stage, Samsung are absolutely disgusting. I’ll never buy a product from them again.

The purple patches have increased now and I’m left with no choice but to buy a new TV.  I’ve sent this thread to Samsung but they fail to acknowledge an issue and repeatedly inform me about a 1 year guarantee. You live and Learn. Going forward when buying any TV that cost a few grand I will be buying an extended warranty because the one you get is not worth the paper it’s wrote on. Good luck to you all here, I’d start saving to get a new TV because once one patch appears a lot more is in the way!!

I have the same issue as Jamie (16-8-18 post) really annoying as I have 2 other newer samsungs that may go the same way.

This is a PC world TV that is out of warrenty - do you think they will fix this as a manufacturer fault?

considering it was nearly 2 grand this is utterly rubbish for a "Quality TV" I agree if they wont do anything about it I will never buy Samsung anything again. 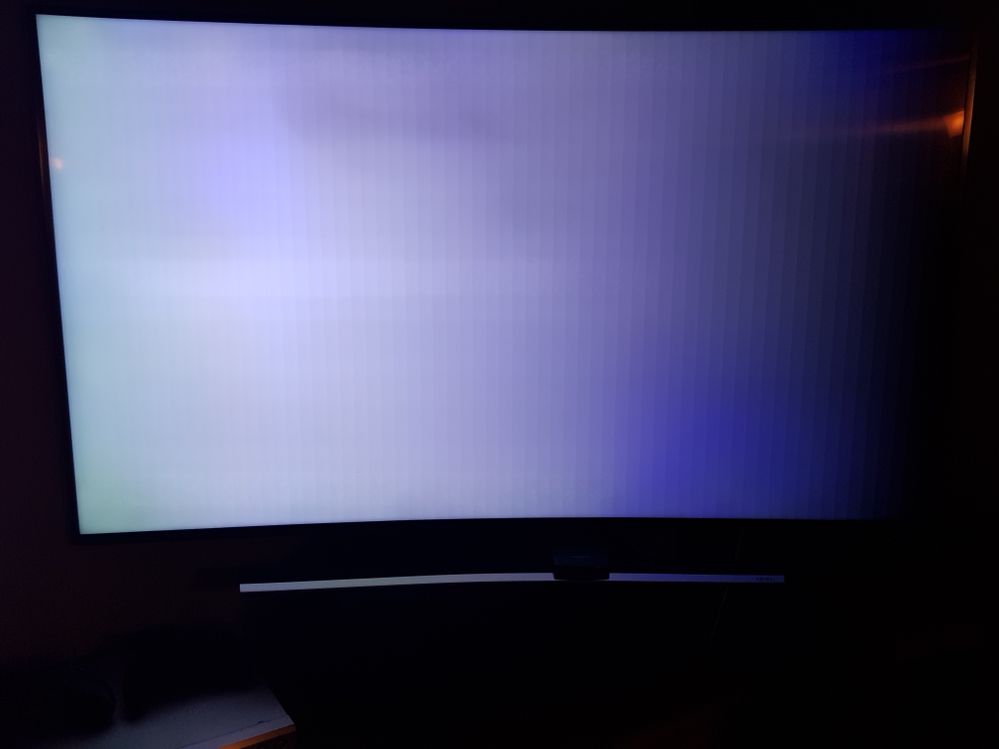 Well, you have figured it out.  No, they won't do anything.  Of course, they know the problem exists but this is an acceptable business loss for them

With the Black Friday sales ahead of us, needless to say that after this fiasco and after having no official response for all this time, Samsung products as a whole are not on my list. And this is literally the time of the year that we spend the most on electronic equipment, gadgets etc etc.

Update: I had bought the TV from John Lewis so I called them to claim under consumer protection laws, quoting the advice from the Martin Lewis site, Which?, etc. I couldn't find the receipt so I sent them a copy of a credit card statement showing the payment (August 2014) but, contrary to the advice on the above web sites, they refused to help. I then remembered that we had made the purchase by phone and received a receipt via email - bingo! John Lewis then accepted the TV for repair but it was under their own 5-year guarantee scheme, rather than Samsung honouring their liability as manufacturer of the faulty goods. Ten days later we get our original TV back but with a new screen fitted.

So 4* to John Lewis (would have been 5* if they had accepted the credit card statement as proof of purchase!)

I now know that I need to budget for a new TV (not a Samsung!!) in about 3 years when this one fails.

Consider yourself luckier than most.  Of course, TVs bought with extended warranties are reparable.  Otherwise, there is no recourse and Samsung will not accept responsibility.

Alzo
Observer
In response to aretzios

Hi all i have the same problem tv 2years old and has developed the puprle patches about 6 months ago . Its not that bad depends whats on screen though somtimes you hardly see it other times its very noticeable . Samsung wont help. Says out of warranty. Advised them of the reports online about my model but they say " were not aware of any issues with this model" yet i find loads of reports online exactly the same problem with sets just over a year old . Wont buy Samsung again very poor service

I also have a 48" 6400 Samsung just over 2 yrs old and a purple patch has appeared top left of screen. I have been the proud owner of several Samsung products over the years, but it is clear from these posts that Samsung is 'ignoring' the obvious...there is a significant quality control issue and the expensive, morally correct route is to put their hands up and roll out a compensation or repair scheme similar to that of car manufacturers when something goes wrong.

Sadly, it appears a decision has been made to cover up the problem and that is reprehensible that could back fire in severe reputation all damage.

How Samsung respond to this post (response unlikely) will determine if I ever feel I can trust them again to buy their products. As "Which?" Magazine has recommended Samsung TV's as best buys including this one, they clearly need to know and this could be a great case for "Watchdog" to investigate for their next series....over to you Samsung!

Ungruntled
Explorer
In response to Hockers

You are dreaming if you think you'll get any response from Samsung. What you've said is nothing different to anyone else on here  and all we get from Samsung is "there are no faults".

Don't you see? The purple patches are a feature  not a fault. At least, as far as Samsung want us to believe.