I have got the Samsung Serif (2019) 49". Just from the beginning I noticed that the lower edge is slightly dim. It looks like a blurred shadow with no clear upper edge. It is mostly visible in uniform, bright colors like a white screen or in the Samsung popup menu. When the screen is clear white this "shadow" has a slight color tilt to greenish/brownish.

In normal viewing conditions the effect is not so obvious. In the beginning I thought it is just the shadow of the massive frame of the Serif, but this "shadow" is clearly not there on the other borders. Attached there are photos with a white screen and the relevant area marked in red.

Unfortunately I haven't got the chance to compare with another Serif till now. I suspect that this is an inherent "feature" of the cheap edge lit display and that it would be similar on another screen. I also searched for photos of the Serif online (not the official Samsung ones) and I tend to see a slightly darker edge in them, too - but there are no really good reference photos. Before I order a Samsung technician and exchange the screen for one with similar or worse characteristics I would like to know how other screens perform.

If all are the same, I would be willing to get used to mine.

Thanks for your advice! 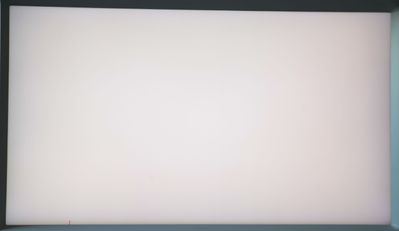