I noticed sometimes my tv gets confused when I select GUIDE.
Instead of the normal display, it shows just the thumbnail video of current channel, on the upper left corner of the display and the rest is black.
Finally I managed to capture this behavior and herewith I attach a photo.
In order to escape of this, you have to select GUIDE again and hope the glitch corrects itself. 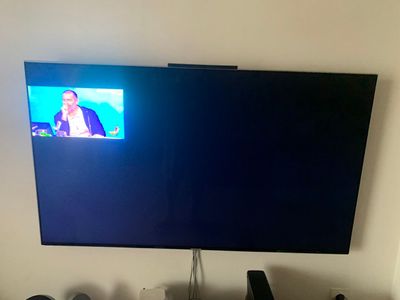 Hi @JohnTs  Just checking you have the latest  software 1290.3, if not you can download firmware to USB via this link https://www.samsung.com/uk/support/model/UE55MU8000TXXU/

If this is still an issue with latest software I would suggest yoyu disconnect Tv for around 5 minutes and/or try a factory reset to see if that makes a difference.

TV has been disconnected and reset to factory several times but not to address this glitch.
It had occasionally some app crash (ie Netflix or YouTube), I recall a case when for no apparent reason it messed terrestrial and satellite channels making impossible to browse the tv channels, it froze after recording a random tv program, lost recording schedule after some successful recordings, Ethernet connection was dead after a router restart, favorite channels order was screwed after edit forcing wrong channel order, etc.

This glitch is happening since 1280.5 days.
I do not recall it to happen when I first bought this tv.

Anyway, I do not expect Samsung to address such issues as their track record shows.
I hope it’s just a software glitch and not a failing OSD mixer board/chip.