Has anyone managed to view Disney Plus in 4K, either using the app on a Samsung TV, or with an Xbox one/Firestick etc? I can only get HDR10 and HD on my UE49KU6400.

I've spent ages on live chat with Disney trying to query 4K availability on Samsung but after going through all the usual technical checks, they just keep reverting back to "it's because of reduced bandwidth".

I just wanted to see if other reports I've read that 4K streaming is possible currently (and it's just a fault with the app) or if what Disney are saying is correct and it's down to bandwidth.

I can't speak specifically to your model type but I know on my KS7000 I also only get HDR10 and HD.

I got the similar lack of clarity from Disney+ and Samsung support. There's nothing out there that clearly lists what kind of support on each device. All I could find was the odd comment on forums like this or Reddit.

Eventually I concluded that the Disney+ app is incorrectly detecting the TV as not being 4K capable. To get around this I bought a Roku Premiere. That instantly detected my KS7000 as being 4K and HDR @ 60hz capable, which in turn meant the Disney+ app did now was listing titles as 4K Ultra HD.

My guess is that it's something to do with the HDR. I had to turned off HDR on my Roku as it's not great on my KS7000 (just started my own post about that) and even though the Roku was then in a 4K @ 60hz mode the Disney+ app then only offered HD. The Roku Netflix app does however offer non-HDR 4K streams. Further online reading led me to read that supposedly Disney+ only offers 4K if you have HDR. That's why Sky Q boxes in the UK don't get 4K Disney+ yet.

To be honest I couldn't see any difference in terms of detail / clarity between 4K HDR and 'HD' on Disney+. Admittedly my Roku is forcing everything out at 4K, so it could be upscaling the HD Disney+ but the raw 4K HDR just didn't seem any better.

Thanks for the reply, that's as I thought, that there is a fault with the app.

I have been in contact with Disney's 'high support' and included a link to your post on here from a week ago regarding the same thing, whilst asking the same question as in my post. I've just received this slightly contradictory reply from them:

"Maybe these are isolated cases.

Or some of these cases have tried to stream NOT on the rush hours of the day when most traffic at the sites occur.

Unfortunately  at this point we don't support 4K for a limited period of time."

Well that's as clear as mud!

My guess, from the language, is the higher up who wrote that is still part of the out-sourced support team. I've no issue with companies using them for certain services but they're just not great for tech services. Once I spent ages talking with my broadbands support team trying to convince them the problem wasn't with my equipment. When a local person finally came out they discovered the installation mistake they'd made in minutes.

My only guess with Disney+ is they're being deliberately vague so that everyone thinks it's 4K everywhere and on everything.

Avengers Endgame on Disney+ is in 4K for me on a Samsung Q90 using the Samsung Disney+ app. 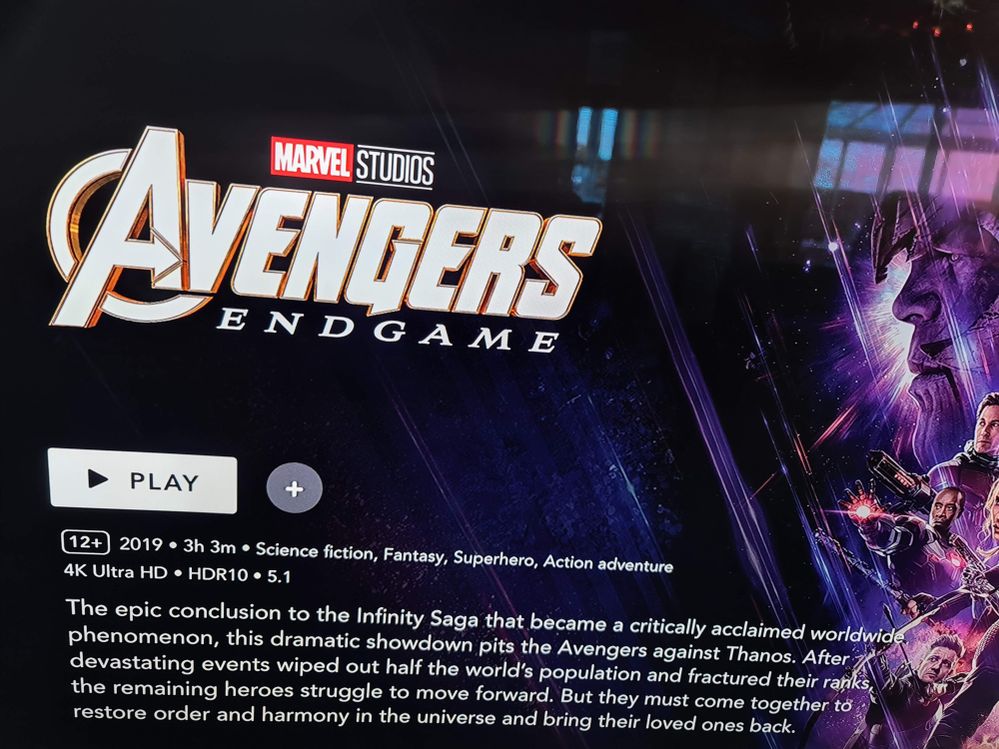 So it looks like Disney telling me they aren't doing 4K at the moment is, as I thought, incorrect.

Seems strange though that it does work on some Samsung TVs but not others, surely the app is the same across the board? I know it's not just my TV as my parents have the same model, just smaller screen, and theirs is the same as mine.

I would think it's almost certainly down to what the app detects the set as capable of. In all my testing I discovered that was a key factor.

The Disney+ app probably thinks some TV's are only 4K 30hz and therefore won't allow it to show anything in 4K.

I learnt that when my Roku plugged in to my KS7000 via my Pioneer AV receiver couldn't correctly detect that the TV could do 4K 60hz. It reset it to 30hz and then neither the Netflix or Disney+ apps would do 4K.

It seems to me when it works, Disney+ is great (picture and sound quality are great I've found) but they've not fully handled all the different possibilities and as such there are issues.

It appears due to the recent Pandemic for COViD19, all Disney UK streams will downgrade the bandwitdh during this time. It is therefore possible that your set supports the 4k Ultra HD/ HDR 10/5.1 Dolby but at the moment the max you can get is HD (or even SD).

I have the 49KU6400 and the Samsung Disney Plus app doesn't even show HDR10 in the details at the moment. Using the app on my Xbox One S it shows both 4k and HDR10. Clearly something wrong with the Samsung app.

I have the same TV and thought I couldn't get 4K due to the bandwidth restrictions. However I tried the app on my mums Samsung which is a 2018 model and she could get 4K. There does seem to be a problem with the Disney app on the 2016 models so I've now purchased an Amazon firestick instead and I can now watch Disney + in 4K and HDR