The issue is that all the films that are listed as being available in 4K are saying they are only in HDR10 HD for me, not 4K or Ultra HD or anything.

My set is a 4K one and Netflix and Amazon Prime work fine with 4K. I can't see any options in DIsney+ to ensure 4K is enabled, info online states everyone gets 4K as only as your device supports it.

I'd rather not have to buy a Roku or something else to get Disney+ in 4K but I can't find anything online suggesting any kind of update or fix is in the pipeline.

Anyone able to help or fill me in on something I've missed?

One of our TV experts has advised us that the app sounds like it's working fine in your case.  For the app, there's no indication of the current resolution - only the HDR logo on the current picture setting on the Home bar. Adaptive streaming by the app means that it'll alter bandwidth and resolution based on the current network capacity of the internet connection used by the TV.

Thanks for the reply. I'm not sure about that though. Have a look at this image I've taken from another forum about Disney+ 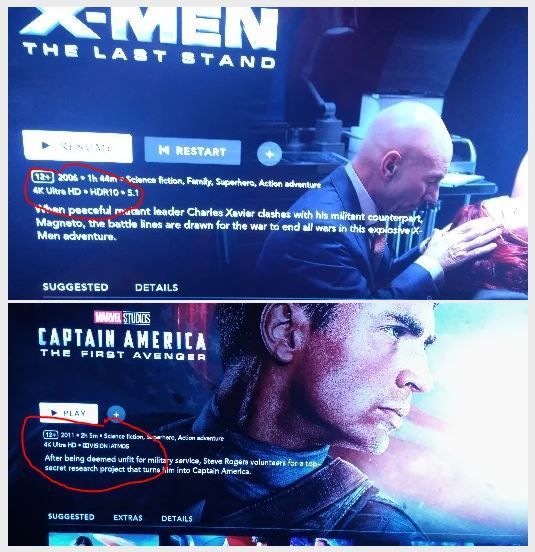 As you can see in the two lines of summary description on the second line it lists the resolution, HDR setting and Audio format it will stream in. Selecting Details below will show all the formats the film is available in, however that summary line shows exactly what quality you'll get.

On my KS7000 it only says "HDR10 HD" which means I'll never get the 4K quality stream the TV is capable of displaying.

So it's working pretty much like the Netflix app, which will look at your device and work out what quality it will stream in. So on the KS7000 the Disney+ app is not considering the TV to be capable of display 4K, even though it is. On another forum someone else wrote their their Nvidia Shield did a similar thing. The device can handle 4K but the app isn't reading the device as 4K.

I think Samsung need to speak to Disney to figure out why 4K TV's that support the app aren't being recognised as 4K.

I was looking at this this morning.

Reading around US sites, the disney+ app on ks7000 (search ks8000 in US its the same model) originally released with HD only, then then added HDR10 later and 4k is still promised for later still.

So hopefully we'll get it in the future.

Thanks for confirming you're getting it as well.

I bought a Roku Premiere connected that to my KS7000 directly and via my AV receiver and in both instances the Roku Disney+ app said it was streaming in 4K, not just the HD that the inbuilt Samsung app offered.

That means the TV is capable of displaying a 4K Disney+ picture, just not through it's own app... Which is obviously a bit poor given Samsung are claiming that they're supporting Disney+ on the app but then not making it obvious that it's not 4K support.

My guess the 2016 KS7000 is starting to struggle with new services. My Roku box add to be manually set into 4K @ 60hz in order for the Roku Netflix app to pick up it was a 4K TV.

Generalapathy
Apprentice
In response to AntS

I have had the same issue with 4k using Disney plus on ks7000 since launch. The app has updated in the last week and now I'm not even getting hdr10 since today which is annoying as the tv and my internet connection are more than adequate to stream 4k hdr10. Has anyone else come across this new issue?

I'm not sure you / we were ever getting UHD on the KS built in Disney+ app.

Mine never said it was 4K in the app and I tried it on launch day. It said HD and HDR. I think they'd turned on 'HDR' although their idea of HDR is dodgy at best, just google "mandalorian hdr" and see how many people are saying it's too dark.

I bought a Roku premiere a few days later and the Disney+ app on that output 4K, which the KS7000 duly displayed. I can't say it looked way better than the 1080p picture though. Also if I forced the Roku to be in 4K 30hz mode the Disney+ app would only output HD. (Netflix on the other hand will change all it's HDR content to be 'Ultra HD 4K' instead.)

I think the issue is at the current time because the streaming companies aren't being completely clear about how exactly they're reducing their quality settings it's hard to know what we're getting and what we should be able to get.

I've definitely been watching in UHD HDR on the KS since launch. I'm a ridiculous videophile and it was the first thing I checked for on launch. Every Star Wars, Pixar and Marvel movie had UHD HDR on the title screen before pressing play (where it now says HD 5.1), and Return of the Jedi looked fantastic in UHD HDR. I watched the final episode of The Mandalorian on 1st May and it was definitely in UHD HDR - the Skip Intro was so bright as back light had kicked into max which it only does for HDR content. That was the last time I had UHD HDR available...

By the way, HDR being dark simply means people haven't got HDR set up correctly. It's the classic sign that someone can't work their TV and it's something that comes up time and again on forums - and I'm through helping people turn on the right settings on their TV! It's especially common for Sony users...

Back to Disney+ I just wish, like you, there was a better way of knowing what's now going on with UHD HDR. Where has it gone??