I have bought a Samsung AU7100 TV and it's working great - delighted with it so far.

We have been noticing that when the TV is in sleep mode, a red light at the bottom of the TV (under the samsung logo) doesn't stop blinking. When the TV is on, the red light is not blinking.

We have 3 HDMI cable linked to the TV :

- one for a Google Chromecast

- one linked to a Nintendo Switch

I have tried to remove the 3 HDMI cables and the red light actually stopped blinking and was constantly on (during sleep mode). I have then made the test with all of the cables one by one, and could see that ONLY when the Chromecast is plugged to the TV, then the red light would blink.

Does it indicate a problem with the Chromecast ? Anyone has faced a similar issue ?

TV
I hate flashing/blinking/static lights on my TV in the bedroom.. I love black insulation tape cut to the correct size to cover the light though... If everything works fine and your only issue is the blinking light when the TV is turned off, I would count stars... Have you checked all devices for software updates? Do you need the Chromecast? Doesn't your TV have WiFi for streaming?
0 Likes
Share
Reply 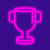 had the exact same problem! But I solved it. I had originally connected my Chromecast to a separate outlet; instead I connect the power supply to the TVs usb port, and the flashing stopped.