All is connected on same wifi. Phone is registered on TV. This is what I see when I try to connect from my phone. 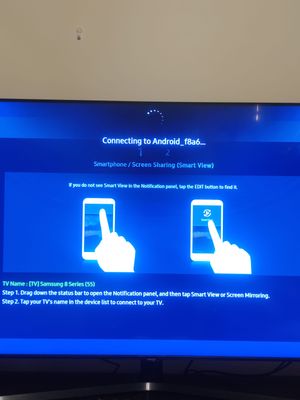 Side note , I can cast Netflix and YouTube no problem.

there's different types of screen sharing apps on different tv's. make sure yours is on or else it won't work
0 Likes
Share
Reply

TV
I had a similar problem on my S9+. Mirroring used to work brilliantly with the old Samsung Connect app (which I had on my S7).

I found that uninstalling the SmartThings app from my S9+ solved it.

Don't know why, but the ST app was blocking the Mirror function for my TV - as in, it would get to the same connect screen as you, but then both devices (on same Wi-Fi network) would say 'connection failed'. Every time.

I was able to cast photos to my TV, or videos, but never my screen.

Mirroring now works flawlessly - I press the 'SmartView' Quick Settings toggle, and my phone mirrors to my TV.

It does mean you have to do without SmartThings, but I've personally found it's less hassle without it installed.
1 Like
Share
Reply

Thanks for your response. The screen sharing tool is on my tv but my phone just will not connect to it

Hey, there's no app called screen share for Samsung new models. It's in built on the TV's it seems

I don't have a Samsung mobile device. I have deleted the smart things app to try your suggestion but it has not worked

Does anyone else or any Samsung support have another suggestion ?