I've just switched from a 49 MU7000 to a 55 Q9FN and was giddy with excitement about finally owning a top end TV.

Unfortunately, I've either received a dud or there's an inherent problem with the tech; for HDR (and even SDR content), the screen goes /incredibly/ dark during dark scenes. We aren't talking perfect QLED blacks here; all detail is lost, UNLESS I leave a white menu screen up. 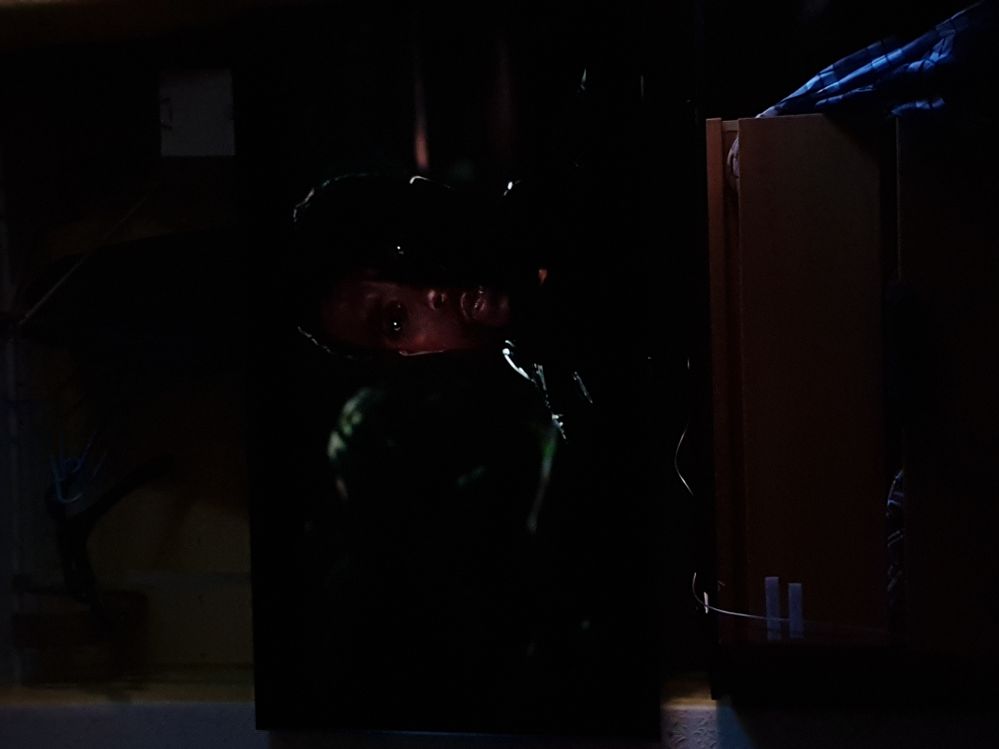 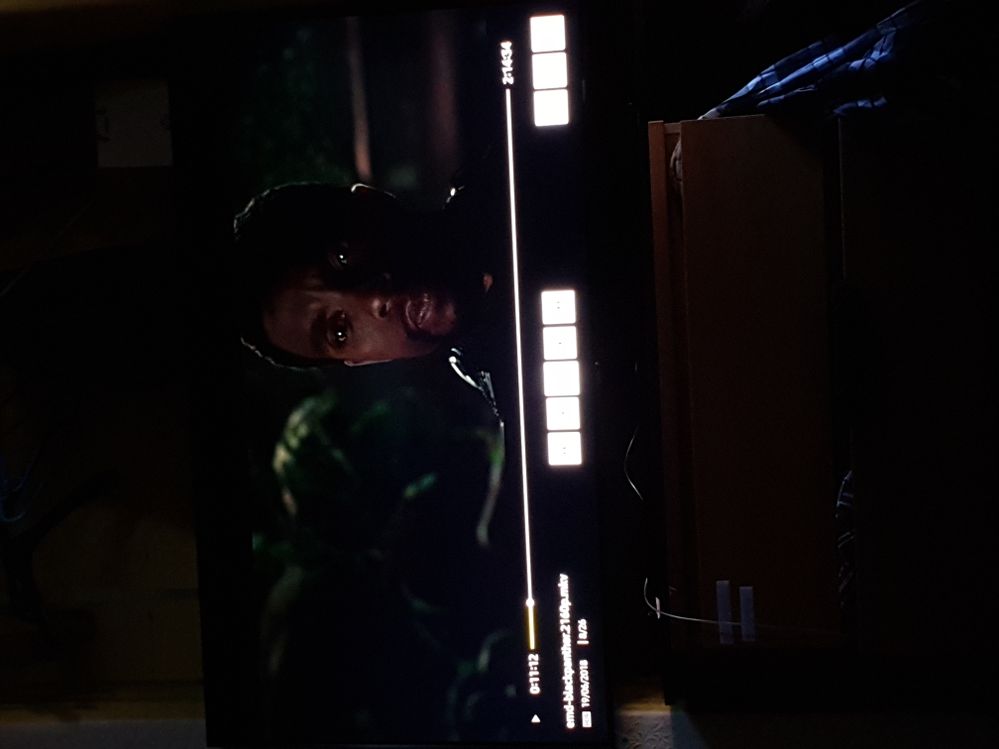 As you can see from the photos. Annoyingly, I'm also using an S9 to take the photos so it does a better job of amplifying the incoming light, but believe me when I say it's even worse than the TV is showing. I would estimate that the unlit picture is displaying at <10 nits.

I ascribed this to either a problem with local dimming or eco mode, but modifying both of those settings made no difference. It's making using the tv for anything other than bright content unusable, and I didn't honestly expect a £3000 TV to be notably worse than a £700 TV.

P.S: Why have Samsung removed the ability to change audio languages when playing from a USB source? All of my movies are playing in Italian or Portuguese with no way to change it.

Yep, TVs ten years ago didn’t have so obvious flaws if I recall correctly...

I learned that if I switch off the "PC Mode Dimming Support" in the service menu I can watch Netflix etc. with my PS4 Pro without dimming AND still retain the option to change backlight level.

You just have to change the device type from PlayStation 4 to PC for this to work. There’s no movie picture mode in PC mode so if you’ve used that before, you have to emulate those settings in standard mode. I couldn’t get the picture to look identical to movie mode, but it’s close enough. I just can’t remember exactly where in the service menu you can find the “PC Mode Dimming Support” option..

I’m happy enough with the TV now so I’m not in a hurry to get a new one.

ncri
Explorer
In response to PepitoMucho

Finally home again and had a chance to test the scene: Atypical S01E8 (12m36s). I do see a very minor flicker effect around the subs, yes, but it is only noticeable when really focussing on it (from about my viewing position at about 3m). No real issue for me. For me it was much worse in Ozark at some point, the screen got dimmed so much that I couldn't see anything at all. Screen was almost black and only when i paused i could see something because the Netflix "HUD" lit up the screen. That problem might have been fixed with a firmware ugrade or with some changes on the Netflix side. But I haven't rewatched it, so I don't know if it is still present there. Haven't noticed any issue so far anymore in any other show though...

G-Tech
Explorer
In response to endpoint101

I’m afraid I have to start saving for an OLED now and stop playing video games with static HUDs for hours on end.

It'll be interesting to see if LG handle this issue better than Samsung are with the lack of ownership/acknowledgement of the brightness fluctuations with the Contrast Enhancement option (in regard to subtitles, etc).

I returned my Samsung because of the subtitle issues and the generally poor picture quality in dark (and medium) HDR scenes. Replaced it by a LG OLED TV.

There are no such issues on the LG. The reason is pretty obvious: OLED panels do not require artificial contrast enhancement features such as local dimming etc.

OLEDs are self-glowing and thus can handle HDR content natively without any tricks. Dark scenes in HDR mode are shown flawlessly just as they should. No washing-out, no bumping, deep black and perfect color resolution even in very dark scenes.

DarkKnight90UK
Apprentice
In response to G-Tech

Don't get me wrong, I realised later that it was basically due to Samsung's approach to HDR on the QLED models. The scenes without white were just completely crushed. When the subtitles are there I actually preferred the image because I could see more detail.  When I was playing HDR games which generally are more consistent with their HDR, the Q9F was great.

However, it wasn't £2000 better. It wasn't even £500 better. I had an MU8000 (or MU7000 in the UK) that I bought for £600 in the black Friday sales and I remember being absolutely blown away when watching HDR content for the first time, never mind 4k HDR. I understand that there is a law of diminishing returns with tech, I'm a bit of an enthusiastic amateur techie, to the chagrin of my wallet, but the Q9F just did not impress at all for the price.

OLED TV's are incredible. They really are. And that's largely due to their impressive ( 'infinite' ) contrast ratio. Peak brightness of 700-800 nits looks a lot better on an OLED than it does on a LCD. However, I just want more. Knowing a game or a movie has metadata up to 4000 nits and knowing that OLED will never achieve that is a pickle when you're throwing down enough for a car. And burn in is obviously an issue. Still, my most impressive experience so far has been God of War on an LG C8. Amazing.

The reality is that I'm no less impressed with the XF90 than I was with the Q9FN because I am happier that I got better value for my money. It is no doubt a technically worse TV, but its 90% for 30% of the cost. Its a no brainer really. Im hoping really that MicroLED will be the next big thing. I thought it was 5-10 years away minimum, but CES this year proved its going faster than that. I'm hoping 3 years before yields make it viable as a consumer product, and the Sony will last me till then.

G-Tech
Explorer
In response to DarkKnight90UK

The point is that LCDs can only achieve very high brightness levels on cost of poor black levels. The vendors try to overcome this by local dimming etc., which causes other issues as discussed in this thread.

DarkKnight90UK
Apprentice
In response to G-Tech
... isn't that what I just said?

'Cause I kind of think that was what I just said.
0 Likes
Reply
Highlighted

G-Tech
Explorer
In response to DarkKnight90UK

Seems Samsung has now posted a first official statement about the issue. It is being investigated:

endpoint101
Navigator
In response to G-Tech

I clicked the link expecting to get Rickrolled or something

Are they advising that dimming backlight shows the issue or resolves the issue temporarily? For me, if if I turn the backlight down to <10 (for example), I will see the dimming issues (like a black cloud coming across the screen). If I turn up to 50, there is no issue. This is with all Eco Settings disabled (which, mind you, I want to be able to keep enabled for a $3000 TV).

endpoint101
Navigator
In response to haltedconfusion

I've had no official advice yet. My support ticket has been passed to "one of our 'Product Specialist' for further assistance. In this way, we'll be able to get few suggestions on how to rectify the issue." -- that was 7 days ago, and I'm waiting to hear back. That was after I was asked to submit a video of the issue via email, which I did 3 weeks ago.