The new update of Samsung KS series 7000--->9800!!!
Fw 1242 update completely destroys the game mode. Test it in game mode local dimming test in youtube. The black color is now gray. What the .... is this update?? Why destroy samsung Ks series??? I have UE65KS9505. This model in Usa UN65KS9800. This model is FALD local dimming one of the best black level on samsung model with 150 local dimming zones. This model was at that time the most expensive Samsung TV. Please help us who have this TV!! Samsung cannot do this to destroy thousands of dollars of TVs.
Test your KS series tv's to see the problem. Ks7000--->Ks9800.
Need to report to Samsung so we know about the problem and they fix it. Don't ruin our TV!

I'm glad I searched before updating.

So why is it the update list mentions nothing about picture quality changes?

In pervious updates this was the case as well.  Changes were made in various areas that caused me issues that were not even listed as being changed.

How the hell is anyone supposed to make an informed decision about updating or not without accurate update information being disclosed by Samsung ???

This coupled with the fact the system forces you to only upgrade - you can't load any firmware version I choose means that updates are like playing Russian roulette with multi thousand dollar hardware.

This screams class action lawsuit for anyone who has been affected by an update causing the hardware to function inappropriately.

It is proof that Samsung is, like has been suggested, being set up to stop working as advertised when it was sold.

Unless Samsung makes it possible to downgrade and they give details on each upgrade that is included in the 'update available' message, and is given complete detail online, they are setting themselves up for a huge lawsuit .

The update was sent some time ago, and not a single response from Samsung on this thread??

I have tried to report problems to Samsung in a lot of places and have referenced this topic to see there are many of us who notice a bug. I was able to write to Korean developers who may have started investigating the case, but I’m not sure there will be any improvement in that either. I link to the Korean support page and there you can also refer to this topic to get to them that there are many of us in this Samsung community. Use a translator because the page is not in English. https://www.samsungsvc.co.kr/erms/sec/secQna.jsp

I recommend this site because it’s the parent company and maybe they take it all more seriously than in other countries because I haven’t received an encouraging response from anywhere to work on a solution and repair.

Regardless, write to them on several websites so that they can see the global problem!

I wish you good health and a nice day!

Is there any chance to fix this bad local diming in the service menu?

Unfortunately it can't be changed there either. The error is deeper in the software. I've tried everything but nothing. There is a hidden menu in the service menu and you can set local dimming there but that doesn't change it either.

Samsung Switzerland is not responding to my complaints.

Please do something! Sue this fraudulent company for intentionally  downgrading their products

I have written to the korean parent company several times who at least respond but have not made any repairs on the tv yet. Report Report !!! That’s all we can do, because if they see a lot of people writing about mistakes, maybe they’ll fix them! We need to write to more countries and then they will see that the problem is global. My last letter was: Dear Samsung!  The attitude you currently have is completely incomprehensible to us!  I have written you countless letters asking you about the UE65KS9505 / 9500/9800 models to fix the bugs in the Local dimming smart led algorithm which is why the tv cannot display as deep black as before.  We believe that a $ 5,000 TV is expected to fix a software bug that the community is reporting to you.  We have written to America, England, Korea and many other countries for samsung to fix the image errors caused by the 1242 software.  Was this the most expensive TV on Samsung and do you treat us that way?  What do you imagine?  Who should buy the Q950t now expect the same support?  On behalf of the user community, we ask you to take the reports seriously because it is unbelievable that I have to write to the Korean parent company from the other side of the world to fix the bugs in the Local dimming algorithm and other bugs.  Let their answer again not be to write to others in other countries!  You parent company should take the appropriate steps to correct the image errors and algorithm errors!  Notify software developers to fix Full array local dimming algorithm bugs!  It's outrageous to be treated like that!  We look forward to bug fixes as soon as possible because our feedback has not been addressed since February!  Find official software developers in KS9500 / 9505/9800 and fix bugs!  Link to the community: https://eu.community.samsung.com/t5/tv/65ks9500-new-firmware-1242-issues-with-firmware/td-p/1591072

I hope if we bring together many people then we can solve this problem and Samsung will fix the image errors.

Any progress on this? I am on an older firmware. Is there somewhere I can download 1241 and then is there any way to prevent auto-updating to 1242?

I don't know of a page where you can download the 1241 firmware because it's always up to date on the website. Maybe the Korean side is older than 1233 if I remember correctly. No patches have been made since then, there is currently no new patch.

Hello guys , only to inform to you after almost one year later there is a new firmware for this KS family ( SW 1243.2 ) in the downloads section of the model. In my opinion I'm not sure if is a good idea to proceed with this update since I didn't find anything on the web about change log.. with some luck this firmware might solve the problem of the greyish backlight introduced on firm 1242 but honestly I'll wait sometime to get information and if possible (For me is more secure) try to downgrade to 1241. but if anyone of you already have it on your tv or plan to update right now, let me know how was for you.! Best luck! 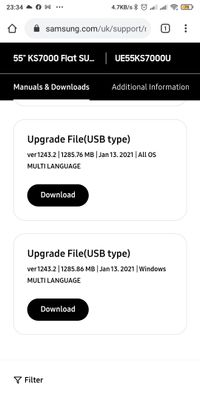 1243 was just released in the US. I can't find any information on this update.  Barry on the poor performacumen@gmail.com of 1242 I never updated.   I am joyful this update fixes the introduced backlog bug.

I'm so frustrated with Samsung. This whole community made an issue, over a year ago and multiple times, that Samsung provider a list of all features added and all bugs that were addressed so we can make informed decision.  Too many companies have  done Bs like make phone batteries be used more quickly, slower performance, etc to drive user base to buy new.

Can anyone speak to what this update did compared to 1242 or newer?

Thanks all for keeping samsung honest