Sure we will all have heard about the NHSX Contact Tracing App currently being  trialled on the Isle of Wight, if proves effective expected to roll out nationally in due course.

The app will use Bluetooth Low Energy which will keep track of Handsets and relay Data.  The App will be able to determine when a user experiencing symptoms  has come into significant contact with other people using the app and therefore build a Traceable Map.   It will rely on self reporting on an anonymous basis, users though will need to enter the first part of their Postcode.   The system is voluntary but reports have suggested  it will require a take up rate of around 60% to be effective.

Other European countries have similar approaches but most are using a decentralised system where the Data is only  shared on the handsets, whereas in the UK and France for instance  are using  a centralised approach where all the Data ends up on a centralised server for processing.    The NHS can get more information on how the disease is spreading if users share location Data, however there are greater privacy  risks and they will not be using the technology developed by Google/Apple.   https://www.pocket-lint.com/apps/news/151988-nhs-contact-tracing-app-wont-use-apple-google-solution

I do have some concerns but think it is beneficial to have contact tracing assisted by technology, in addition to other methods.   I think it is likely that I will be using the app, though everyone of course can draw their own conclusions.  I will post two articles here giving somewhat different prospectives on the Technology.

Samsung Lounge
Tracking apps have a definite risks in terms of security and/or privacy (Especially when there are some errors) but it also has its benefits.

The largest questions to me are
- Is it voluntary (If yes, good!)
- Will the system get shut down after the crisis has concluded (Including deleting personal traceable information, except if there is an explicit, optional opt-in).

My country has some plans for an app but so far we don't have a decent candidate that meets our requirements. So the government ended up developing one from scratch (Which will take some time to complete) but its important that we all accept the benefits but stay aware from the risks that an app can create.

For example the China approach is slightly... Dystopian to say the least if it comes to feature creep

Yes need to consider the balance of benefits/risks  and ensure you have some awareness before downloading these types of apps.  Though of course depends whether you wish to take certain aspects on trust.

The App has apparently  run into some problems and apparently there will will be a bit of delay before it rolls out.  Security and privacy problems have been identified by researchers , though functionality also an issue in the trial.

Traditional contact tracing  though will be used throughout the Uk ,utilising technology with the app really being an additional tool  https://www.bbc.co.uk/news/technology-Role of Contact Tracers

Bit of a PR calamity, yesterday the Uk's Digital Minister  said the app may not be ready till the winter and it was not a priority (somewhat of  a shift) .   A bit of problem with Apple Devices on the trial. to say trhe least.  Reports now that there may be a switch to the Google/Apple model or at least based on it.  Other countries though have also faced challenges  and the Bluetooth Technology has not always proved accurate in terms of estimating distances, more so with Apple/Google model.    The decentralised approach not without issues,   You may need to register for  Guardian  articles but there is no subscription (remains free and only asks for email/password).

Samsung Lounge
In my country they actually (silently) killed the concept of the app. ^-^ But things are well under control right now so that's a good thing!

The apps have proved not to be a magic bullet but think could still be of value  (as long as effective obviously)  particularly when contacts increase (such as random ones when there is greater use of public transport).  I notice that the number of new infections in Netherlands is low just now mind you.

In latest Briefing Govt/Head of Contact/Trace cannot give date when app may be operational,speculation it may be lauched in the autumn but did involve contact tracing at that point.       Later heard that Northern Ireland will be developing their own app to ensure compatibility with the Republic.  Previously the devolved  Scottish Government said they would use the NHS app as additional tool provided it was secure and fitted with their systems.

Technology always has great value, but requires great responsibility and has great risks, especially combined with medical information and the decision on how long it's stored. It's better to delay it than to do it the "wrong way"

That said, in my country the general testing is available and everything is very much under control

Here are a few figures of the total IC's in use. The first figure is the new people that are being accepted with Covid19, the second one is the total number being treated. 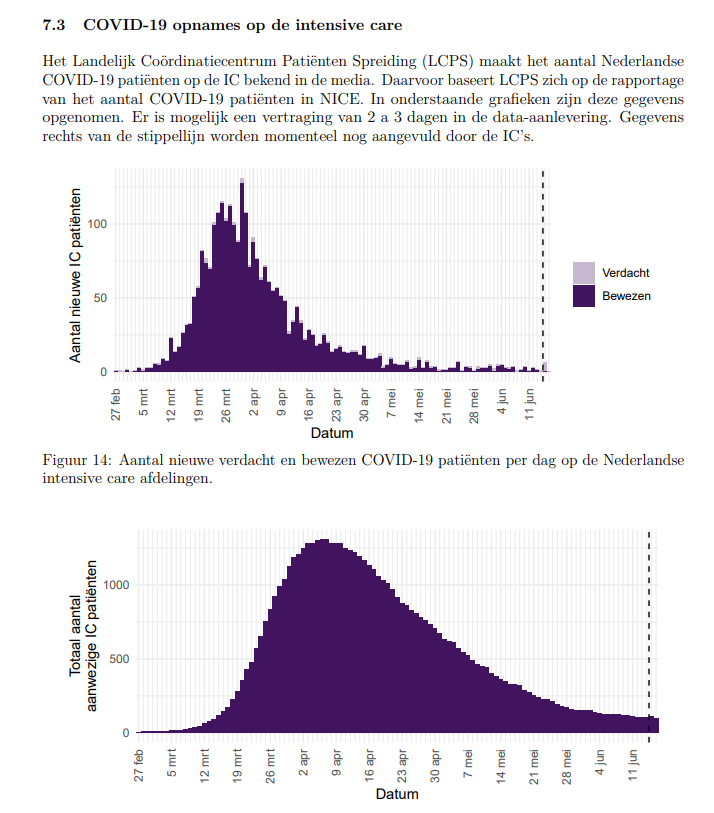 At this moment I'm more afraid of a second wave, but it's very much under control and people/organizations are following government recommendations so it's fine ^-^

@SjorsK  Well yes true a delay better than having adverse effects and not truly considering the ethics, however think challenge was underestimated and could have learned more from other nations.

Samsung Lounge
I think every country initially underestimated the situation, I still remember the day of the "Would be" formal announcement of a crisis and for the initial "intelligent lockdown" preparations. And our lockdown wasn't strict at the very least but the mindsets of the average employee suddenly switched from "Doing your job" to "Adjust to the new situation" in a snap of a finger.

In my case I went from paperwork (Writing manuals, proposing changes etc.) to preparing laptops in a matter of seconds. The team was -extremely- oiled. That was two hours before it was officially announced (There where rumors, and we where told to prepare for the worst case scenario during the first press conference).

That said, up until this day I'm extremely happy with what I was set up, and how my team did take over what I left behind in times of crisis to assist other teams ^-^

...Even though there was no outbreak in my area, I'm quite sure that I would have been infected if it wasn't for the measures in place

So looking back I'm happy with the advice the government did give, and all organisations that honoured the advice otherwise we would have major issues over here, and believe me when I say that it was -really- tight. (People where transported from the south to hospitals all over the country using special ambulances).

I have a deep respect for the military, healthcare personnel and the police trying to coordinate it while saving as many lifes as possible ^-^ Some people had to make horrible decisions.

But back to the app, I don't think that an app is a solution but it's a tool that can be used. The best way is to stay out of crowded places wherever possible and work from home if your job allows it.

In my case if I have to go to the office it means cycling and not using public transport. And if I have visit I prefer to keep it with only one other person at a time

Taking responsibility on a personal level is the way to contain the virus until a vaccine is available - Which will most likely be early next year for the earliest group of people (Healthcare workers and risk group first, after that the other critical functions before general availability).