# 2 The photo should be properly exposed

Sure, but what does that mean? And what is it about the animal, the exposition ?

Exactly the exposure is the time how long is the film or sensor on the light. In practice, it is inaccurately used for an exposure value (EV) , which is the result of how long the illumination takes place, what is the sensitivity set, and what is the aperture number (N).

Brrrr, Fuuu, what is it, math ?! Yes, but it's not as bad as it looks at first glance. This ugly pattern tells us that the photo is the lighter the lower the aperture number and the darker the shorter the time . This formula applies to ISO 100. Fortunately, ISO is linear, so if you double ISO, EV will double.
Note: The exposure is measured at a negative logarithmic scale and the lower number means a lighter photo. The physicists do not complicate us at all, do we?

Example of time dependency on aperture at constant ISO:

Okay, but what can we do?

The good news is that today's cameras have a very advanced auto and exposure values ​​set for you. But it does not always work perfectly.

How does the automation evaluate the exposure?

The camera detects brightnesses in the scene. It can take the whole picture into consideration or take into account only the location you are focusing on, depending on the settings and application options. The Samsung camera emphasizes the focus area because it assumes that the main object is there. Then it tries to set the values ​​so that the histogram looks good in the area.

Ajaj, another concept I have not explained yet? Well: The histogram is a chart that gives us insight into what the photo exposition looks like.

There is a brightness on the x-axis, the y-axis is the representation of the given brightness in the image. When the value is high, there are many points of just that brightness.

The histogram has one or more vertices. The top on the left indicates that there are lots of dark pixels on the photo, the right part marks bright pixels. The ideal histogram has peaks between extreme values. If the left or right steep line is completely at the edge of the histogram, it means the image is underexposed (left) or overexposed (on the right). 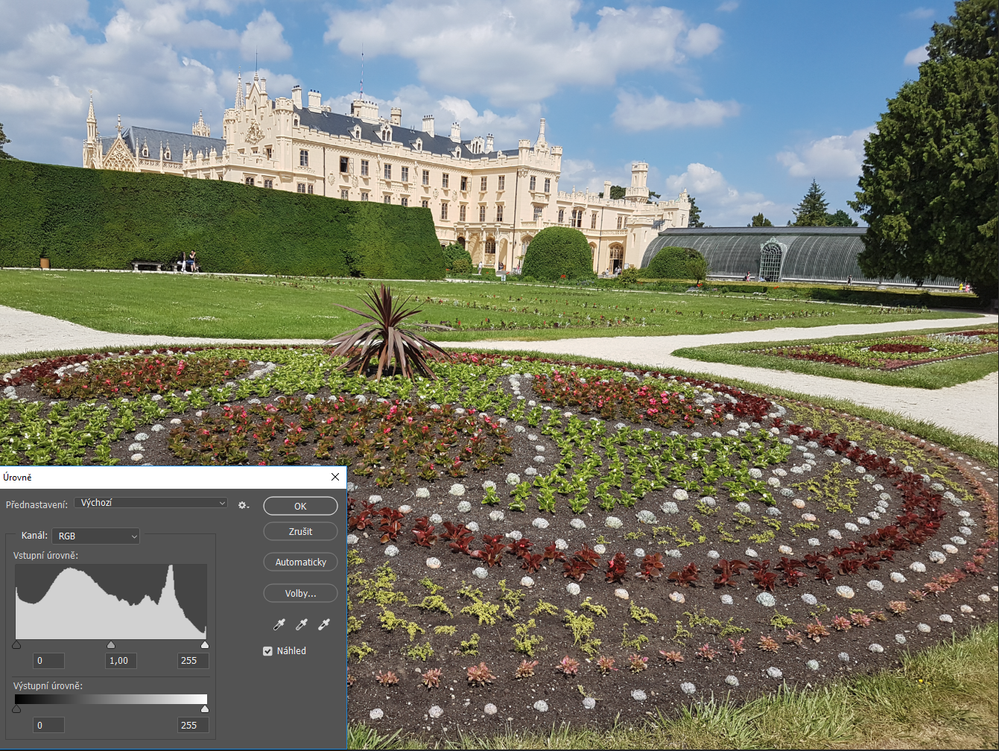 Properly exposed photo, the histogram only slightly touches the edges

A correctly exposed photo, while the histogram strikes the right, but this is due to the range of the sensor. The price for this is the loss of drawing in the clouds. 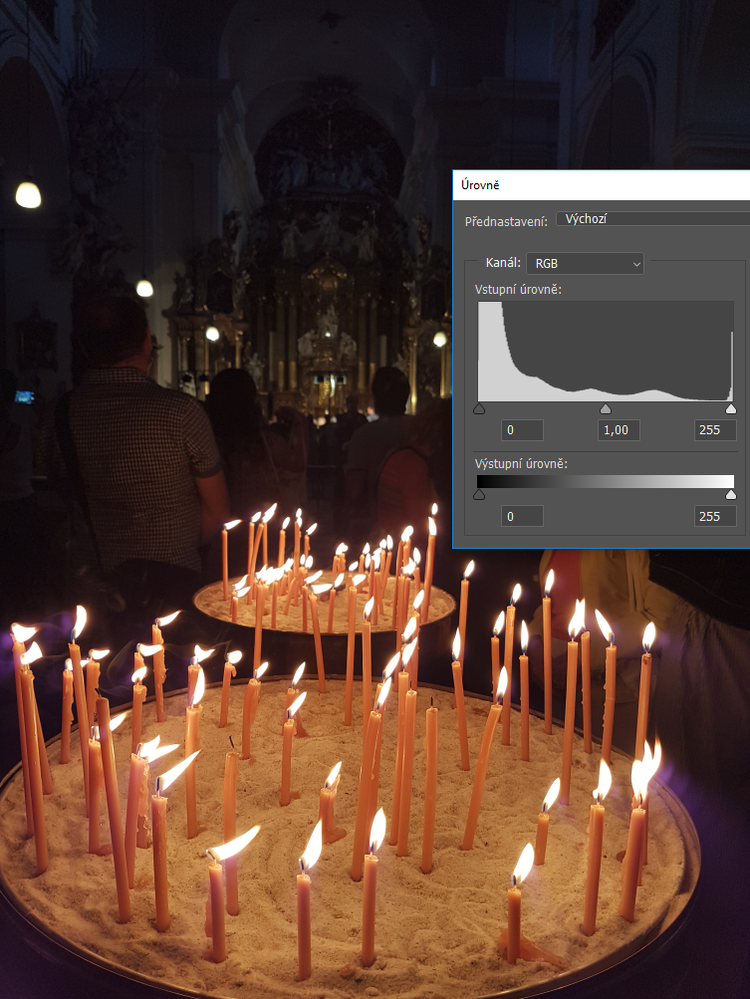 The histogram is pressed to the left and to the right. Yet it is correct because it is a dark scene with light elements.

What can you do? Missing darknesses are quite easy to fix in a slightly better graphic editor, but areas without artwork can not be rescued normally (photographers are now catching their heads and shouting at me: RAW!!! and are right, but this is beyond the scope of this article). 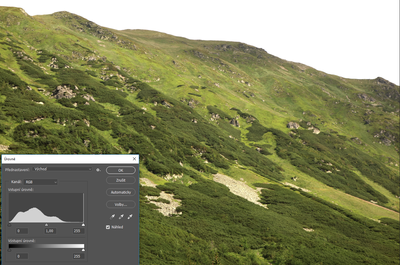 After editing in the editor

Well, a lot of theory, but how to arrange for the photo to be exposed correctly?

I recommend first try the automatic . Today it's pretty good and good scenes are good. The new models even know what you're photographed (called AI - Artificial Intelligence), and when such a mobile knows you're taking a night photo, it does not use a dumb automatic that overexposed the photo, but adjusts the settings to keep the night scene atmosphere.

If the automatic fails, we can help her. Even in automatic mode, exposure compensation is available. This is especially necessary if we are shooting a scene with a large range of brightness. Maybe a Christmas tree in the dark, but with lit lights. Automation sets values ​​so that it looks like it's in the day, but we do not want it. Then we have two choices:

What are the typical scenes where the automaton fails? (this may not apply to artificial intelligence and scene recognition)

Why the automaton fails in large-scale scenes is quite understandable, but why does not the white cat fail on the snow? The automaton assumes the ideal histogram, which has most brightness somewhere in the middle. And if the scene is too bright, shifts them a little to darker, gray. The same thing with black cats in the tunnel, the automatic moves the scene to lighter. That's fine if we want to capture the details, but the atmosphere of the scene goes into the grove.

That's why I do not like HDR . This is the process of automatically adapting dark and bright places so that they do not lose the artwork. However, the atmosphere of the scene is lost, especially at night photos that look like a daytime photograph.

Why are there any spills, and what is it that spills? Imagine the sensor cell as bucket and light (photons) as drops of water. The photons hit the sensor, causing the electric charge, as well as the water raining into the bucket and filling it. If we let the photons on the sensor or water in the bucket go too long, the maximum charge is reached for which the sensor can no longer go - and the bucket overflows. Whatever falls into it, it can no longer be measured, we would have to use a larger bucket. (The water level is the equivalent of the charge and their value corresponds to the brightness for the given point of the image). When shooting with time and aperture, we ensure that the light comes to the sensor. If there is little, the point will still be scored as black. When the power, as well as the points to be bright, will be evaluated as maximum brightness and the drawing will be lost in such areas. It is even more complicated by the fact that the red, blue and green ones are evaluated separately, so you can lose the drawing on the flower, but the leaves will still be fine. This is due to the different sensitivity of the sensor to different colors.

This guide is interesting and advanced !!! Thanks

I was reading about HDR Video in mobile phones recently, please, can you explain us a bit about?

Photography Talk
Mobile HDR capabilities mean you're able to view the content the way it was intended to be seen—with the fine details. The HDR in mobile HDR stands for High Dynamic Range, and it refers to the technology that lets you see the incredible details even in the very bright and dark areas of the scene. Similar to what you see with your own eyes.

Please, if I take a photograph or video in HDR, what would happen if I reproduce it in a medium without this technology? Do you will loss definition?  black tone?

I understood about your criterial to use the HDR, but devices will have this mode on automatilly, I suppose, then your recomendation is to use HDR if we have no light and we need details of scena? What happend with shadows? Please @Libb  could be interesting to show us diferent pictures and scenes with and without this tecnology with your precious comments 🙃

This technology as you know is "new" and we don't meet it correctly.

Please, can sameone translate Libb's guide and notes to Spanish and post it in Spanish Community (and others)?

Hi @YulianK, can you help us?

PD: as a recommendation, I would advise to unify the entire guide in a single thread, and that its author adds content in the first entry and reserves the following space after the first entry (maximum entry limit is 30,000 digits)

@RpBP Hi, don't hesitate to use Google Translator. zThe english article is also translated by it, the original is in Czech language (my native language). I used Google translator because it is too long for manual processing and the I oplny checked mistakes.

Good morning @Libb , @vvllaaddaa , all, the google translation to Spanish is not correct, I suppose to German will be better than to Spanish

I think is a good guide, but if you read my last message, I spoke about change the format of two thread to one thread (add new chapters to finish guide), and translate correctly to other lenguages as French ,Italian, German, Spanish and after, to create a thread in all Samsung Communities with your guide. I think will be persons inside Samsung than they can translate easy to other lenguages after all the work are you doing.

I belive could be interesting. Are you agree?