S8-Can I downgrade from Oreo back to Nougat?

Can I do that if yes can you tell me how.

Just being Nosey but may I ask why you’ve decided to want to roll back ?

May I ask how you put Oreo on your phone originally ?

If by the official Oreo Beta then this is from the Official Beta Notes. 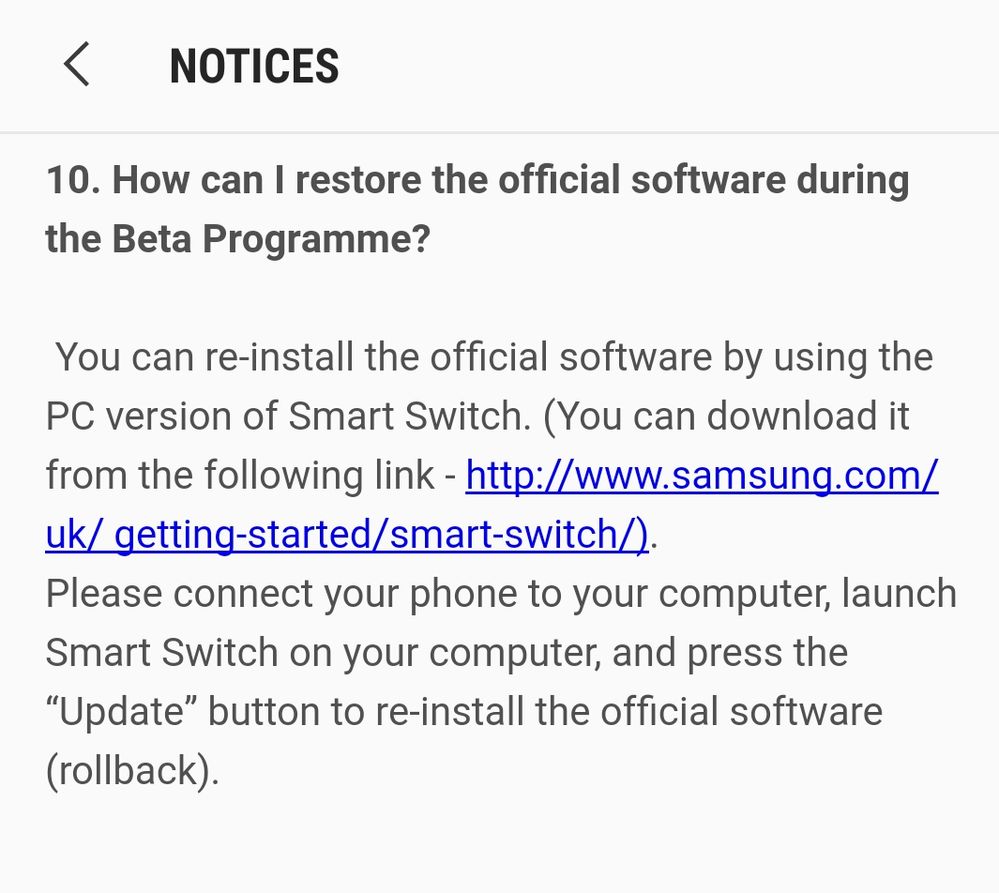 If via a custom rom then I’d suggest to visit SamMobile and xdadevelopers to read the tutorials and as importantly learn what to do if something glitches.

Other Smartphones
So far all works well, with slight issue with BT however I've noticed that I'm having problems to connect to my car via Android Auto (error 16) and I need that feature. So that's why I will.be rolling back.
1 Like
Share
Reply

I've rolled back using smartswitch. Android Pay wasn't working properly and the experience was a bit laggy. Also, the active  notifiation labels on each app really played with my OCD to the point i found them irritating. T

This is one of the reasons I didn’t want a Beta Firmware on my daily driver.

Really this should be put on a back up phone for testing as each Beta iteration will hopefully resolve / iron out reported back bugs to Samsung.

But until then bugs will appear , be ironed out and could re appear with other bugs being experienced after a Beta Update. It’s pretty much the whole point of using a Beta Firmware.

Its a shame these bugs Experienced led you to roll back.

Well it was useful to get some real world experience of it and I might go back to the beta further down the line. Hopefully the feedback I have provided goes some way to helping fine tune the experience so when launch comes its buttery smooth. The S8+ as a device deserves the best software Samsung can muster because it's a great phone!

I can't speak for this person but I personally want to roll mine back to nougat from Oreo (downloaded/installed through auto update on my galaxy S8+ ) because for some absurdly rediculouse reason Android (or samsung) thought it was a good idea to get rid of the feature that allowed you to set an individual messageing notification tone per specific individuals. And that is a very important feature to me personally.it alowes me to know who is measefime me at work so I know if it is important to check right away i.e my children or other important people. why on Earth would they do away with that option ? I'm very upset of this. And personally to me the steps to roll my galaxy 8 back to nougat looks very confuseing and to be a pain !

I'm on Oreo and personally I prefer the dot on the app to show something is new.

However a person can set this to a dot as I have or have a number of awaiting new notifications in the dot.

On my s8 this is via Settings - Notifications - App Icon Badges - Badge Style.

Absolutely with you on this. Personally, I'm all for new features, but I despise being forced to accept a different style at the same time.  I don't mind one being offered - but the choice of how my phone looks and feels should be mine. There are no technical reasons why each feature upgrade should also require an enforced style-change. The only reason it occurs is for the same reason that supermarkets move items in the store around - it's a trick used with the intent of psychologically controlling their users. Or put another way...it's one group of humans trying to mind-f.u.c.k another group of humans with the intent of profiting from the mental unbalancing. So, that makes Samsung just like every other big tech company I guess!