@srg-b, @KornelB - Since allegedly fixed firmware is already in the wild for TW & HK regions, there is no reasons to worry about OTA for other regions. Or it is? Moreover, ERF4 is AFAIK 4th public release of Oreo for S7. First in May was for BTU only and gets bootloop, then second fixed went global, 3rd EREM become global too (current latest) and now started ERF4.

But if you want to try new build right now, you are free to flash BL/CP files with Odin, links for G930F(D) and G935F(D) are already posted in this thread.

@VSiam I have the EREM right now as you can see from the pic, I would like to try the new ERF4 but I'm not so good with that software stuff man 😁 and besides that I really don't understand why the Samsung representative in my country (Romania) is denying that they have encountered the same issues up till now, that can only mean that they are covering up.

So what I will do, I'll submit my S7 flat to their service,  as they've  requested, not before making screen shots of everything that I can regarding the software version ... and see what they'll have to explain when they will check what they are now stating as "never been reported here". If they will fix the issue I hope I'll be able to identify what they did, but if they won't, I'll make sure that this entire sarrade that they are pulling goes public, and I mean public, TV, online you name it ... even if I'll have to pay for it I sware I'll do it !

I'm sick and tired of that bull man, first they have wasted my time going to the service where they have replaced the battery and the mother board, which didn't helped at all !!! Than they are now asking me to submit the phone once again to "further check the issue"... come on !!! 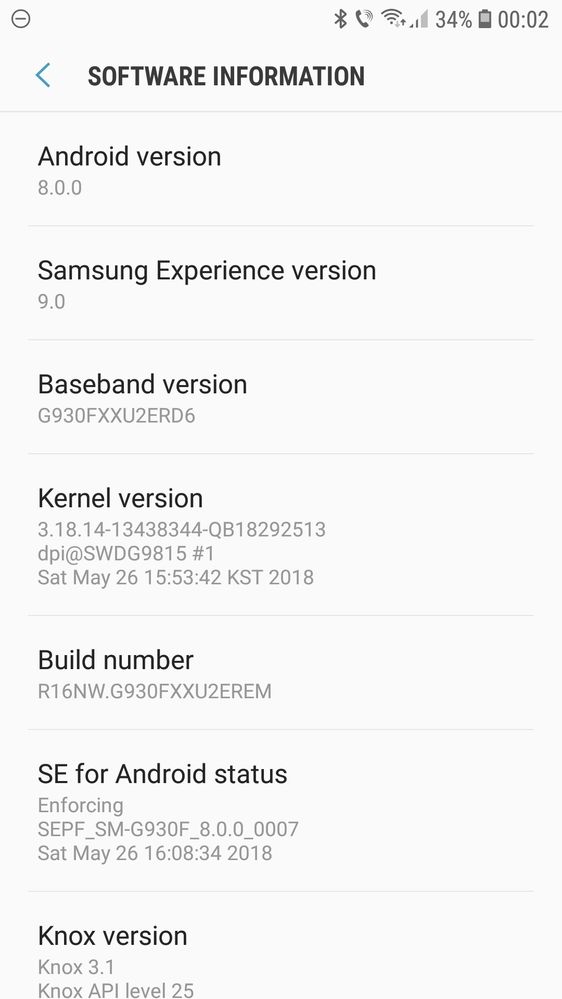 Before flashing EREO, with ERD6 modem.

Check screenshots. Definitely got better what comes to cell standby battery (now it is consuming less battery regarding on statistics), but overall battery didn't get that better as I waited.

Will see if whole update (= official one; if it comes sometime) will fix the issue totally.

Make your conclusions using these screenshots.

Just letting you know my experience on this. I'm running a G930FD with the Vodafone NZ firmware (VNZ), with the cell standby battery drain issue. I flashed the bootloader and modem from earlier in this thread (EREO) and this fixed the cell standby issue, but I had similar battery life overall due to Google play services battery drain.

This also caused the device status to be detected as custom, and android pay, Samsung health etc. would not work.

I flashed back to the VNZ bootloader and modem and the Google play services drain is fixed, but the cell standby issue came back. Device status is back to official now though. I will try just flashing the EREO modem (not the bootloader this time) and checking what difference that makes.

Either way, so far the battery life is worse on Oreo compared to Nougat regardless of firmware.

Guys! F**k this sh*t with mixing firmware, we did not pay for flagship device to play now with garage roms building, killing your warranty and bricking your device. If I wanted to go custom roms, I'll buy Xiaomi or other stuff and play with xda. When I clicked 'update' I expected that my device work better but now I see I can't really trust Samsung - it's my first (and probably last) device of this brand. I come back to Nougat (and recommend to all of you) and wait until this sh**storm will finish.

Dear Samsung! How much time will you fix your fault?! Will you fix it at all?!

That's my point, too, but there's no point in yelling at Samsung because they don't give a rat's a** that you're upset. If the fix is in their roadmap, they'll deploy, if not, you're screwed. I've seen it so many times before with hardware producers.

So it's up to the community to find a way to restore phones to working state. If you don't like that there's nothing you can do other than selling the phone and buying a Google/Apple.

Answer: Yes, but SOT after update is so high, because I used calculator a lot ( = not heavy usage).

Answer: Yes, I have 2 years old S7 Edge. I'm using only 4G just because I want to see battery drainage. I used only 4G also on Nougat.

Answers are in "Quote".

The samsung support from the members app or live chat or even calls is so uneducated , contacted couple of people where they were saying to factory reset it is like their universal answer to anything and if that wont work then bring it for rma

Only software developers can help which we never speak with them

Even if there is new firmware for me the modem was not updated i had to update it manually , flash ereo modem dont wait for fix it wont be very soon

What steps should I take to get back to Android nougat without losing my settings on my phone?

Other Smartphones
No sh*t right!? Why do we have to jump through flaming hoops after buying a $700-$800 phone just because we actually want to use it for 2 years?!
1 Like
Share
Reply