@SmashMix wrote:
Thanks for reminding me about another issue which came after Oreo update

honestly, I did not notice much difference here about heating.
the phone is better in practically everything with the oreo update, however, unfortunately, only need to correct the cell standby problem.
I hope this topic reaches the programmers of the Samsung smartphone division.
0 Likes
Share
Reply

No one is saying that S7 Edge with Oreo is somehow worse than one with Nougat. I actually really like Oreo and these small improvements came with it, but bugs are not letting me to fully enjoy the update. I hope I explained my opinion clearly enough

Back to noticed heating issue: I think that the phone is heating more after update. Unless I can't remember that I felt heated phone in my hands before the update or at least not so often as right now. IMHO.

Well, it is obvious that Oreo was poorly optimized and tested before it was widely released and has some (also yet unknown I guess!) bugs along with some improvements

My Galaxy S7 Flat lost around 20% of battery overnight instead of 2% (AOD Off) due to "Cell standby" battery drain in Oreo 8.0. The phone is on LTE network with mobile data On. The only way to temporary stop battery drain is phone restart, which helps for some time. Phone on WiFi or 3G is much less prone to this bug. We need firmware fix ASAP!

After a whole day of use, the Cell Standby process isn't that of a problem, sure it isn't gone (3 to 4% while using wifi, 7% when using cellular data) but it is less aggresive compared to the 20 to 28% before trying the Background Process Limit thing.

I think it is thanks to that, since Cell Standby is a background process and limiting the amount may not let it be active all the time, but I'm not sure though, it may be for a random reason, because

is still definitely not a solution, just a way to soften the problem.

My device is S7 Edge 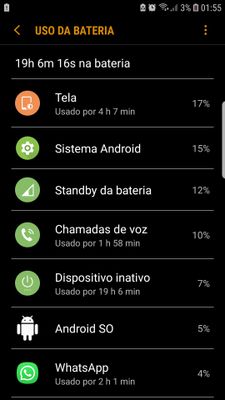 Other Smartphones
I decided to do a factory reset again, and this time I will not install the April security patch, and then post the results here.

Remembering that previously before making the update of the security patch of April 1, did not present the "cell standby" during the first day.
0 Likes
Share
Reply

But as far as I know you will have to flash the firmware via Odin, because if you do a factory reset in the menu it will still be on the last firmware version before the reset (with the security patch).

But as far as I know you will have to flash the firmware via Odin, because if you do a factory reset in the menu it will still be on the last firmware version before the reset (with the security patch).

I did the procedure by turning the device on by pressing volume up, home and power, I entered the boot screen and selected the reset factory data option. In this way, the update I made soon after the other time, starts being requested again.

Okay, so what is your patch-level now?
For me (in Germany with CSC DBT) there was only one Oreo-update yet and it had the April-patch already included.

In fact the April-patch already came before the Oreo-update when the phone was still on Nougat.

Okay, so what is your patch-level now?
For me (in Germany with CSC DBT) there was only one Oreo-update yet and it had the April-patch already included.

In fact the April-patch already came before the Oreo-update when the phone was still on Nougat.

on my device after factory reset, April 1 appears in the security patch, however, strangely and later the device requests an automatic update of an April 1 security patch again with the file size of approximately 76 mb, and only after I perform this new update, is that the problems begin here.

so actually what I'm doing now is returning to the oreo factory update without doing this "new" update that was requested.

Just to inform, using the oficial oreo rom from UK flashed via ODIN, and Im from Brazil.