a quick question to all

Other Smartphones
As samsung users do you think
People use apple phones more or samsung?
I would love to hear your opinion/answer
I have come across people using samsung phones more
0 Likes
Share
Reply
2 REPLIES 2

Other Smartphones
I'm not claiming this is 100% fact - I'm pretty sure Samsung phones are used more globally, with Apple dominating in the U.S, In particular several A series have been popular in recent years, with A50 and A51 being best sellers, and S21 series pre orders breaking the UK record for Samsung smartphone pre orders. I believe beating the S10 series.
2 Likes
Share
Reply

Other Smartphones
take a look at the smart phone market share, that should give you a general idea

I think the post above is pretty spot on though, apple genuine dominate the US market and some very specific age groups markets too.

I used apple from start to the 7 (as well as Samsung) but over time the power of the Giants shift varying on a lot of factors.

right now the war seem to be based on who can get the most people on their eco system like subscription based services rather than what bran of device they are using as people tend to keep their phones longer, definitely noticeable by apples very low consistent market share now but stocks and profits are up up up! 6 different sub services for each user to pay for, it's a massive income source and the way for their future.

that being said, I don't particularly agree with the rent a phone model but each to their own it's a system that definitely works. 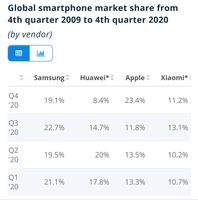